I agree with Zoomie - maybe in the FWSAR category, although Brazil already has 20 C-105A for SAR.

It looks to me like it's another "block" of countries that are considering its purchase, which is good for them, but I don't think it'll be a threat to the current fleet of J's Canada has purchased.

I am admittedly out of my lane here but I thought pure jet (turbofan) engines were a definite no-no on something that was going to be bouncing in and out of gravel/dirt/clay/whatever airfields.
I know there are commercial  jet airliners specially fitted to operate off gravel strips, but would such a modification still be effective on an aircraft meant to be used as hard as the Hercs are ?
A

Bass ackwards said:
I thought pure jet (turbofan) engines were a definite no-no on something that was going to be bouncing in and out of gravel/dirt/clay/whatever airfields.
Click to expand...

You would be mistaken. 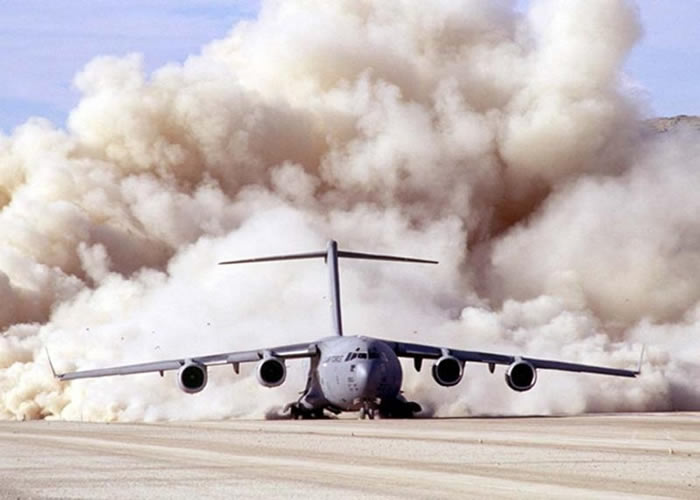 How do they prevent engine damage from crap getting sucked in on rough fields ?

(not arguing, just genuinely curious)
A

How do they prevent engine damage from crap getting sucked in on rough fields ?

I'm not sure but i would imagine that the engines are mounted in such as way as to reduce the risks of ingestion to a sufficiently low probability.

CDN Aviator said:
You would be mistaken.
Click to expand...

Holy crap!  I guess that would rule out a go-around for a little while, eh?

CDN Aviator said:
I'm not sure but i would imagine that the engines are mounted in such as way as to reduce the risks of ingestion to a sufficiently low probability.
Click to expand...

Fair enough, thanks.
That (really neat) photo pretty much shot down my theory.

Correct me if I'm wrong CDN Aviator, but wouldn't that picture be of a take off, not a landing ?

I mean, isn't all the crap behind caused in great part by the jet blast (thus take-off) while the engines would otherwise be reversed on landing (and not putting up such a mess). Also, the front wheel does not seem to be putting up much in terms of dust.

Just asking. Awesome picture though!
A

Oldgateboatdriver said:
Correct me if I'm wrong CDN Aviator, but wouldn't that picture be of a take off, not a landing ?
Click to expand...

Thats how it looks to me but in the end, it still shows that a jet can operate from that environment. I mean, if it is taking off from there, it must have landed there prior to that as well. i don't think Boeing builds these things at dirt strip airfields.

For what it is worth, rough field ops is no picnic on a Herc either. The RAF had to add rubberized coating to certain areas of theirs to reduce the damage being done by sand.

You can see it here in line with the props and below the rear ramp area. Saw it on one at RAF Lyneham and i had to research it to figure it out.

We're more concerned during Take-off when it comes to ingesting FOD.  The engines are at full power and the ground speed is low - ripe time to suck up gravel etc.

Prop aircraft are not perfect at flying on gravel either - just like what my AESOP friend mentioned - stirring up rocks on take off is a bad thing, this is done relatively easily with large diameter propellers.  I've never been concerned about gravel ingestion during landing - usually the airplane settles nicely and slows down quite quickly.
P

Great video of the C17 landing on a dirt strip. Should answer most of the questions.

pylon said:
Great video of the C17 landing on a dirt strip. Should answer most of the questions.

Definitely shows the benefits of landing into the wind....

Boy, that would not be kind on the paint job. However, with the engines mounted high on a c-17, as shown in the video, very little would get kicked up by reverse thrust. Most dust and debris comes off the wheels.
W

DexOlesa said:
Most dust and debris comes off the wheels.
Click to expand...

Concur - when I was up at Alert the front tire kicked up a rock about 12"x12"x2" thick which almost took out some of the sensors on the bottom of the plane.

Jet powered transports might be sensible for very large nations like Brazil or Canada, where distances between places are equal to what most nations consider "strategic", but I always thought that props gave you better fuel economy and were better when it came to making sudden changes in thrust (having to do a go-round or making sudden stops on the runway.)

Actually, since there was a lot of talk back in the late 90's about how cargo size was constrained by the generic "C-130" template (trucks and AFV's being designed to shoehorn into the available space of the C-130; apparently this led to lots of bad compromises with the US FFV program), wouldn't it make more sense to design the next generation of tactical airlifter with a bigger, roomier cargo bay (and the ability to lift heavier loads)?

The C-130 has outlasted at least two and possibly three generations of "replacements", maybe the evergreen Herc could be recast with a larger or wider fuselage attached to the proven wings/tail avionics (probably a lot more difficult than that, but I'll let the qualified people shoot at that one...)

Global competition in the 20-ton air transport segment continues to intensify, with Brazil’s launch of its KC-390 program. Embraer figures reportedly place the global C-130 replacement market at around 700 aircraft. In response, it will develop a jet-powered rival to compete with Lockheed Martin’s C-130J, the larger Airbus A400M, Russia’s AN-12 and its Chinese copy the Yun-8/9, and the bi-national Irkut/HAL MRTA project. Smaller aircraft like the EADS-CASA C-295M, and Alenia’s C-27J, may also represent indirect competition.

Embraer will now seek to extend its efforts and markets by crafting a jet-powered medium transport with a cargo capacity of around 25 tons, that can be refueled in the air, and can provide refueling services to other aircraft by adding dedicated pods. The KC-390 has become a multinational effort, and could even become a transatlantic project…

Feb 25/11: Embraer has frozen the configuration of its KC-390 tanker/transport, and plans to begin the joint definition phase in May 2011, once final decisions are made on major sub-contractors. Aviation Week describes a full scale mockup at Embraer’s plant in Sao Jose do Campos.
http://www.aviationweek.com/aw/blogs/defense/index.jsp?plckController=Blog&plckBlogPage=BlogViewPost&newspaperUserId=27ec4a53-dcc8-42d0-bd3a-01329aef79a7&plckPostId=Blog%3a27ec4a53-dcc8-42d0-bd3a-01329aef79a7Post%3aa740522f-7aae-40d7-a7cd-a643073898a8&plckScript=blogScript&plckElementId=blogDest

Recent changes include longer wings (now 35.06 m), to enable slower 120 kt flight for helicopter refueling with the hose-and-drogue pods. Some customers are reportedly interested in a refueling boom as well, and Embraer is looking into this but doesn’t have a design it likes yet. The most unusual feature may be a movable pressure bulkhead that retracts into the roof and descends to seal the cargo cabin. While it shortens the cabin to 12.78m, it would allow high altitude airdrops from the space behind, without depressurizing the entire cabin.

IAI already has a presence in Brazil, supplying radars and maintenance services, and rumors of electronic intelligence or airborne early warning system KC-390 variants would play to IAI strengths. It’s worth remembering, however that both Embraer (ERJ-145 based R-99A) and IAI (Gulfstream G550 based CAEW) already have established AWACS offerings based on efficient, long endurance business jets. This makes the business case for an E-390 AWACS offering problematic for both parties...
Click to expand...

Does anyone know how many have been delivered so far and how many of the older "H" models have been retired?

newfin said:
Does anyone know how many have been delivered so far and how many of the older "H" models have been retired?
Click to expand...

There are 11 J-models here in Trenton as of today, and I can't be entirely positive, but I believe that 4 H-models have been recently (within the last 1.5 years) retired.
H

a fun day at the office is when you give bitchin betty a workout . . .