Ottawa, Ontario — The seed of what would become the Canadian Disruptive Pattern (CADPAT) was planted in Denmark.

Still, in the hands of the Canadian soldiers and defence scientists behind its development, CADPAT evolved into a distinctly Canadian product – it is a trademark of the Department of National Defence, in fact.

Nearly 20 years since its introduction, and in response to new developments in infra-red and other night vision systems, Canada’s homegrown pattern is headed for retirement to make way for the next generation of disruptive camouflage.

This is [sic] a series of [sic] articles tracing the origins and development of CADPAT – from Canada’s initial recognition of disruptive camouflage as the way forward, to field trials assisted by our allies and, finally, to its emergence on the world stage, where it was recognized as highly effective and would be widely imitated.

CADPAT is Canada’s take on disruptive camouflage. Prior to the 1940s, camouflage was about concealment - allowing soldiers to blend with their surroundings. Disruptive patterns draw on observations of the natural world from as far back as the early 1900s, when researchers made the counter-intuitive observation that high-contrast combinations of light and dark shades are effective in making the outlines of plants and animals indistinct.

Canada developed three CADPAT variations: Temperate Woodland (TW) is the version civilians will be most familiar with as it is worn day-to-day by Canadian Army (CA) members and Air Force and Navy personnel who work in Army lines. Designed for use in forest and grassland environments, it is a mix of light green, dark green, brown and black. 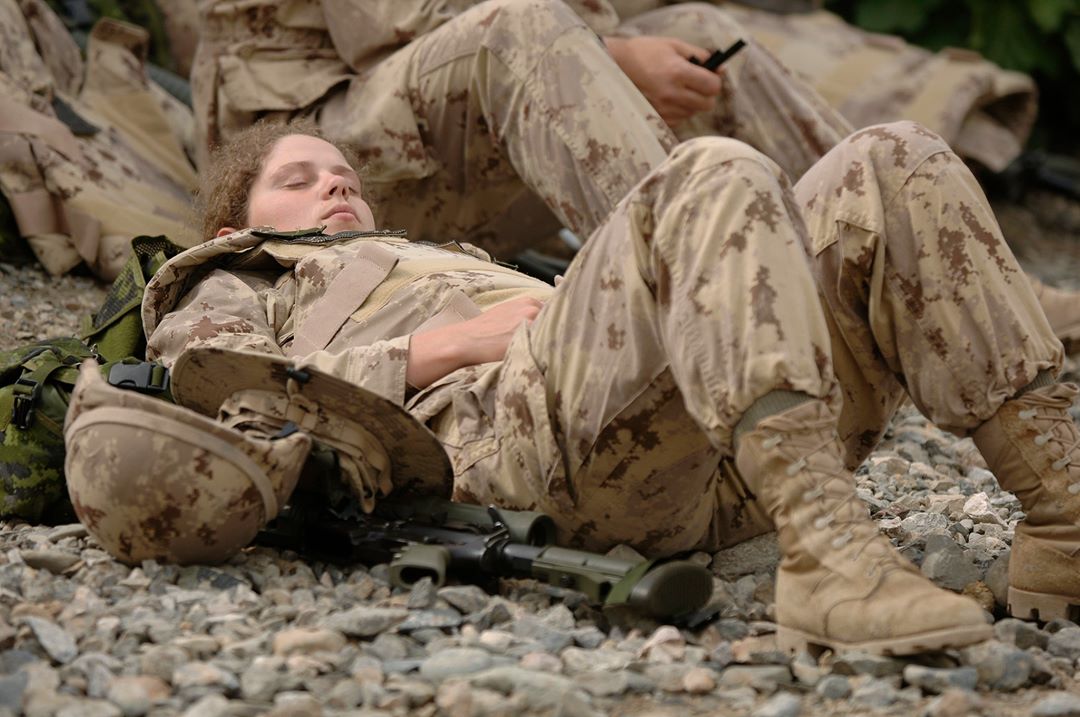 
The Arid Regions (AR) pattern was created for desert, near desert, and savannah conditions, and incorporates three different shades of brown.

TW is being replaced but the CA will retain both the AR and WO patterns.

When viewed up close, the blocky, pixelated look of TW and AR patterns might appear ill-suited to concealment. 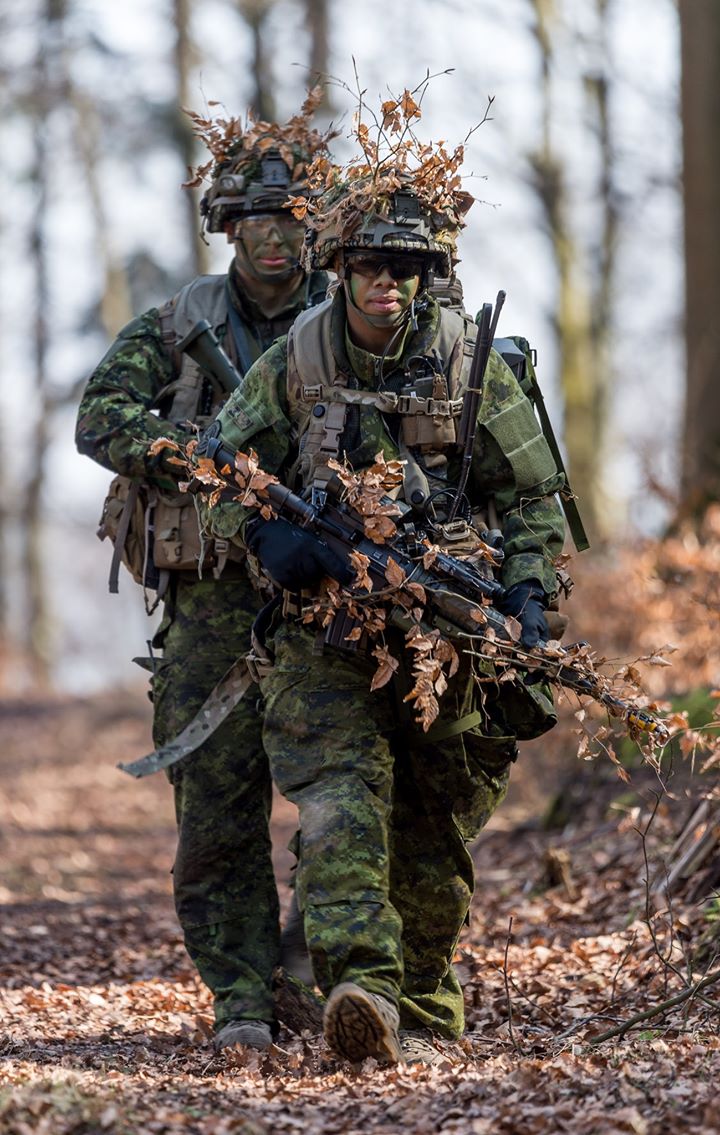 
“From a couple of metres you see the square pixel but when you pull back, then the colour starts to blend,” explained Jean Dumas, a scientist with Defence Research and Development Canada (DRDC). He contributed to the development of the AR and WO patterns, which followed TW. “The shades will mix and that produces the disruptive effect, meaning that the edge of a solider or the general shape will be disrupted - the edge will be fuzzy. You don’t know where it starts, where it ends.”

In the next installment, the Canadian Army takes its first steps into disruptive camouflage research and development and exceeds expectations. 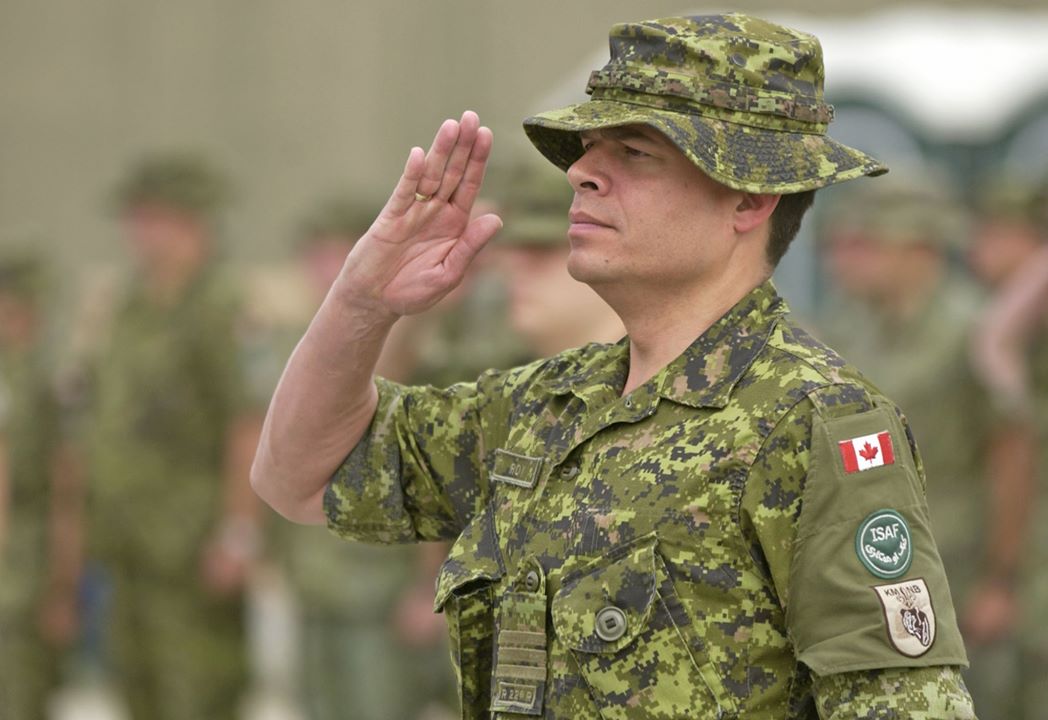 
Moving on from Olive Green

The road to CADPAT began modestly in 1988 with an initiative to introduce new helmet covers rather than the entire uniform. Major (Retired) Doug Palmer was then part of the Canadian Army (CA)’s Directorate of Land Requirements (DLR), which leads Army procurement.

The CA at the time was wearing a monochromatic, olive green uniform, known as OG 107, which was becoming obsolete in the face of emerging detection technology.

“There were a lot more detection devices coming onto the battlefield in greater numbers,” Maj (Retd) Palmer explained. “Detection devices of many different kinds, including infrared.”

Disruptive patterns were the solution but Canada, though it would later become a world leader in them, was somewhat behind.

“We were virtually the only NATO country that wasn’t in a disruptive pattern,” he added.

With these developments in mind the project team undertook an extensive study of natural backgrounds across Canada between 1988 and 1994. As luck would have it, Maj (Retd) Palmer noted, “The applicability of a pattern that was primarily focused in Canada also had a number of applications around the world” – particularly Northwest Europe.

Maj (Retd) Palmer gives much of the credit to Master Gunner Chief Warrant Officer (Retired) Bob Balma, then a desk officer in the CA’s Directorate of Soldier System Programme Management for Camouflage and Concealment. CWO (Retd) Balma used his contacts within the CA, NATO community, and defence contractors to move the idea forward.

The starting point was a disruptive pattern developed by Danish defence contractor DADCON.

“DADCON had the technology initially to compute the pattern but after that in Canada we developed our own means of doing it,” said Mr. Dumas. “We changed it a lot. It’s not the same. We have our own software, we have our own way of doing it here.”

The CADPAT helmet cover, said Maj (Retd) Palmer, was embraced quickly by soldiers, who subjected it to a less scientific, but no less important, test.

“They got the new helmet, they went out into the field and they put a couple of them on the ground and walked away. They walked maybe a hundred, 200 metres away and said, ‘Where’s my helmet?’ And they couldn’t find the helmet. That was the soldier test and the soldiers said, ‘Based on that, it’s a great helmet cover camouflage. I’ll wear it.’”

By the time Canadians were wearing a full CADPAT uniform in the late 1990s, trials and testing had clearly demonstrated its superiority over OG 107. The probability of detection was reduced by 45 per cent and an enemy now had to be 35 per cent closer in order to spot the wearer. 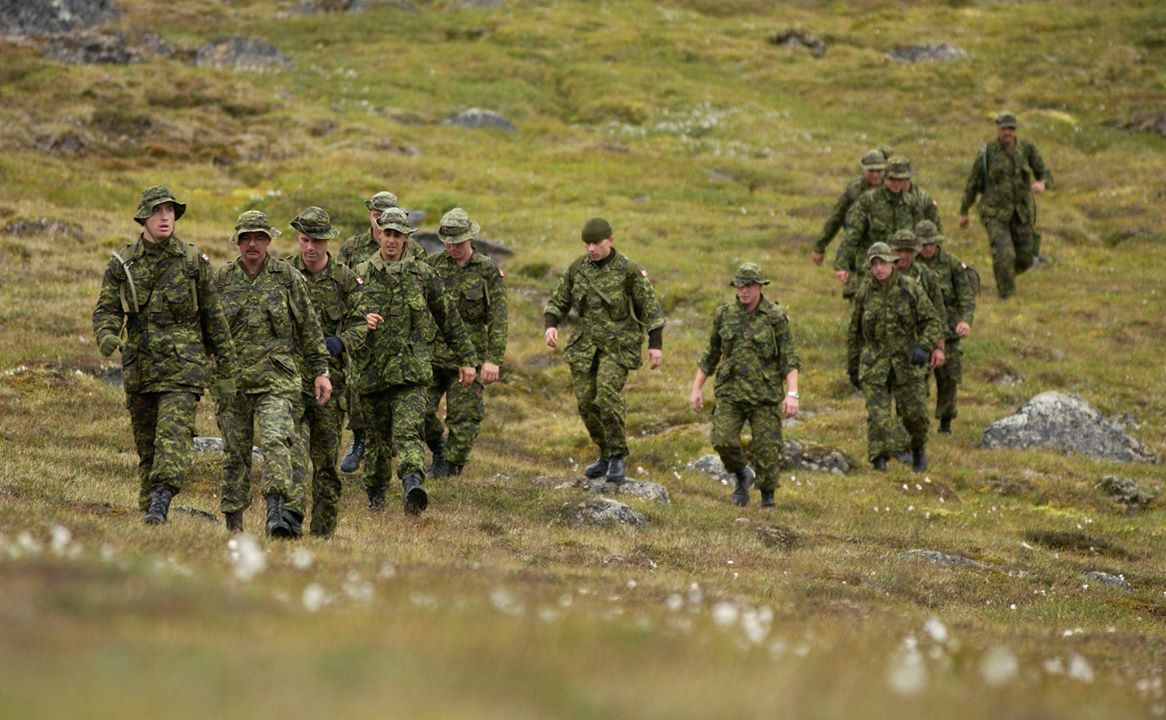 
The project team turned to allies for help in further studies. British forces tested it against other patterns during an exercise in Brunei and came to an unexpected conclusion.

“The Brits came back and said, ‘Far and away, your pattern works best in the jungle,’” said Maj (Retd) Palmer. “And primarily that’s because of the four-colour distribution, which includes black.”

In the next chapter, CADPAT disrupts the Canadian textile industry and an allied nation takes notice.


CADPAT proves to be a ‘superior’ camouflage 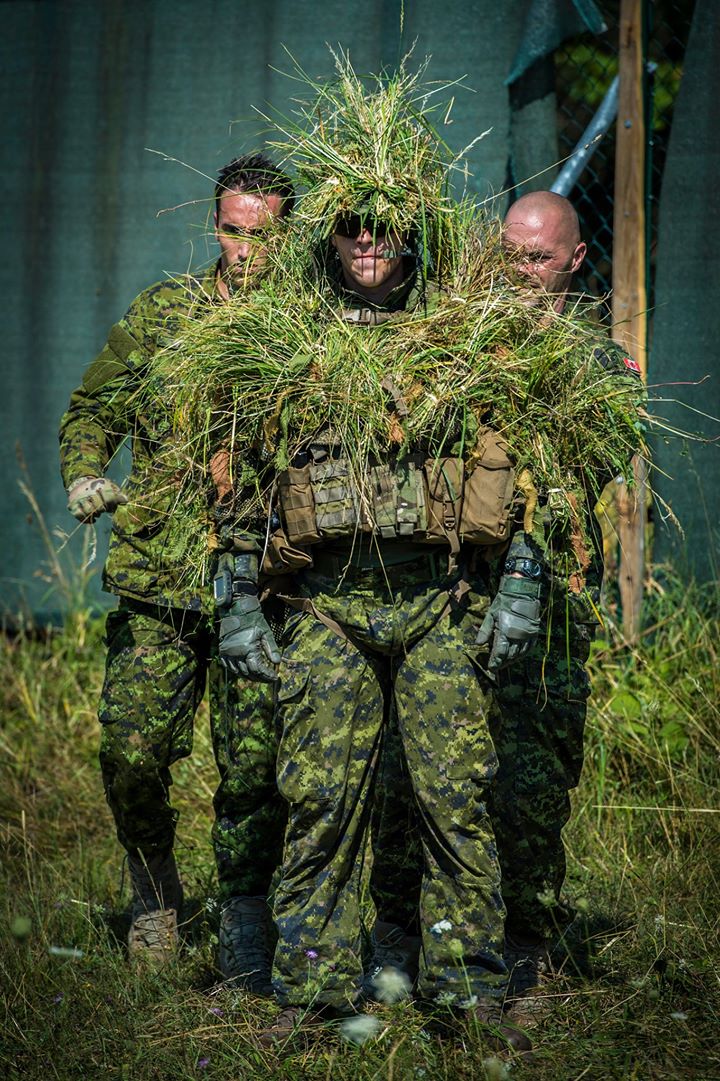 
CADPAT also caused a significant disruption in the Canadian textile printing industry. Initial printing for demonstration purposes was done in Europe, Mr. Dumas said, where the largest available rollers – which apply colours to fabric – were 64 inches in diameter, while the largest rollers in Canada were just 60 inches.

“The first attempt in Canada was interesting because when the company in Montreal got the pattern it simply took the pattern and shrunk it to fit on the 60-inch roller,” explained Maj (Retd) Palmer. “We immediately noticed the pattern had changed. And we said to the company representative, ‘You can’t do that. You changed the size of the pattern, which then affects the detection range and the probability of detection. You just erased all the work we did in trying to get the right pattern against the threat that we had identified.’”

“So we came up against a huge technical problem which we eventually solved but it wasn’t a simple task of just throwing it on a series of rollers,” he added. “What we had was an education process for the industry to understand that they couldn’t play with the pattern size.”

With the pattern having proved successful as a helmet cover, Maj (Retd) Palmer was asked in 1996 to lead the Clothe the Soldier Project, which would include new shirts and pants. Then-Army Commander Lieutenant-General William Leach agreed CADPAT was the way forward. 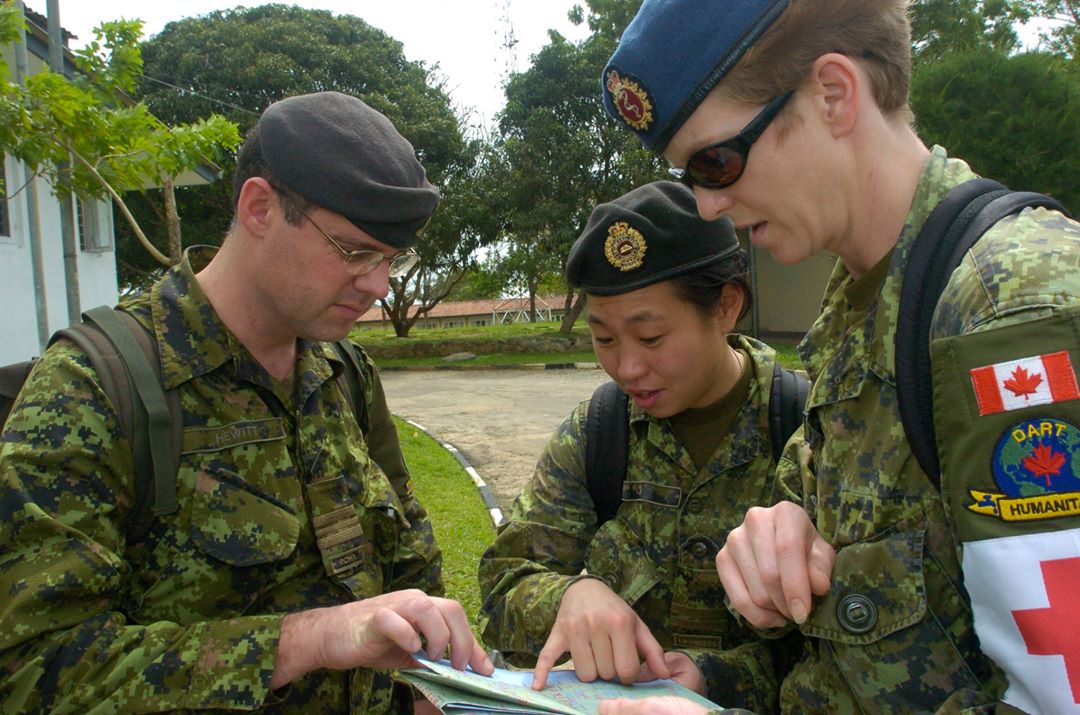 
“So it wasn’t a definitive decision to go to CADPAT by the chain of command up front,” Maj (Retd) Palmer explained. “It was incremental, but there’s no question if we hadn’t had the Clothe the Soldier Project we’d still be trying to get into CADPAT.”

Canada was not the first NATO member to embrace a disruptive pattern, but it did set a new standard with CADPAT.

“We expected it to be copied as soon as it became evident that we’d come up with a superior product,” said Maj (Retd) Palmer. “And if you look around the world right now, the Chinese, the U.S. Marine Corps - and the U.S. Army, too – have in some way taken CADPAT and modified it.”

As CADPAT Temperate Woodland trials entered the final stages in 1998, the focus turned to developing a disruptive pattern for desert environments. 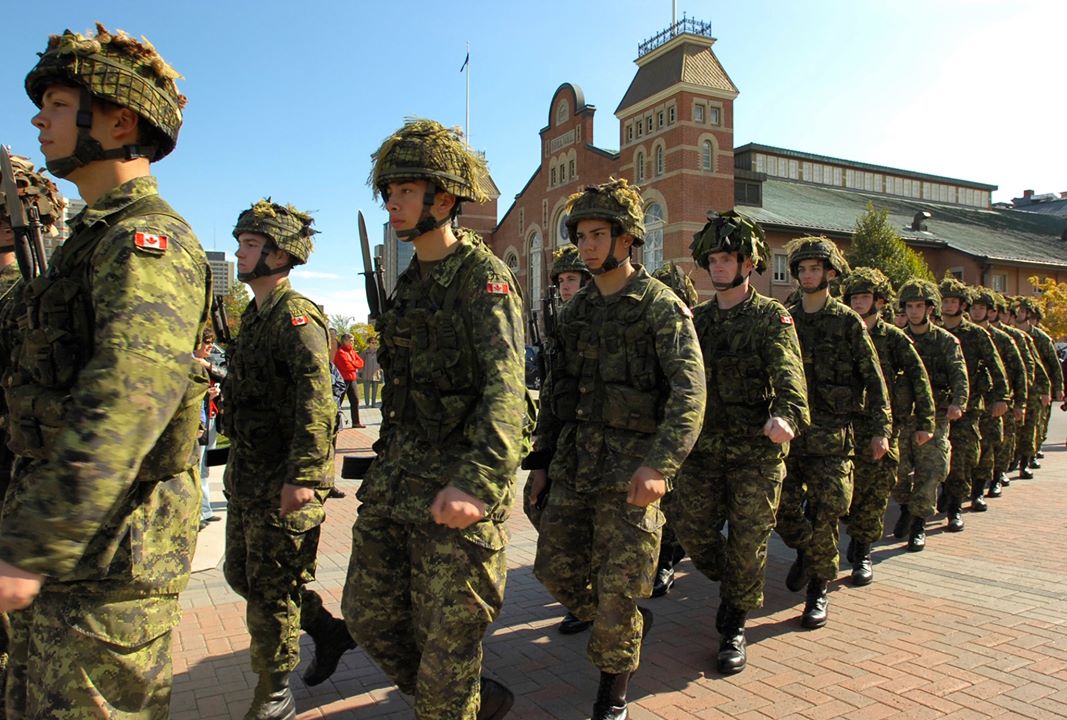 Reservists from the Cameron Highlanders of Ottawa wear the Canadian Disruptive Pattern as they march past the Cartier Square Drill Hall during a ceremonial Freedom of the City parade in downtown Ottawa. On 30 September, 2006. Photo by Sgt Frank Hudec, Army News Ottawa. ©2006 DND/MDN Canada.

And, again, allied support was key: Among the locations where the pattern was trialled is Twentynine Palms, California, home to the U.S. Marine Corps Air Ground Combat Center.

“We didn’t actually run our own trials but we were able to build on other folks’ exercises and get results,” he added. “We took the Arid to Twentynine Palms and a couple of other trials and that’s how we certified the arid for initial deployments into savannah and desert.” 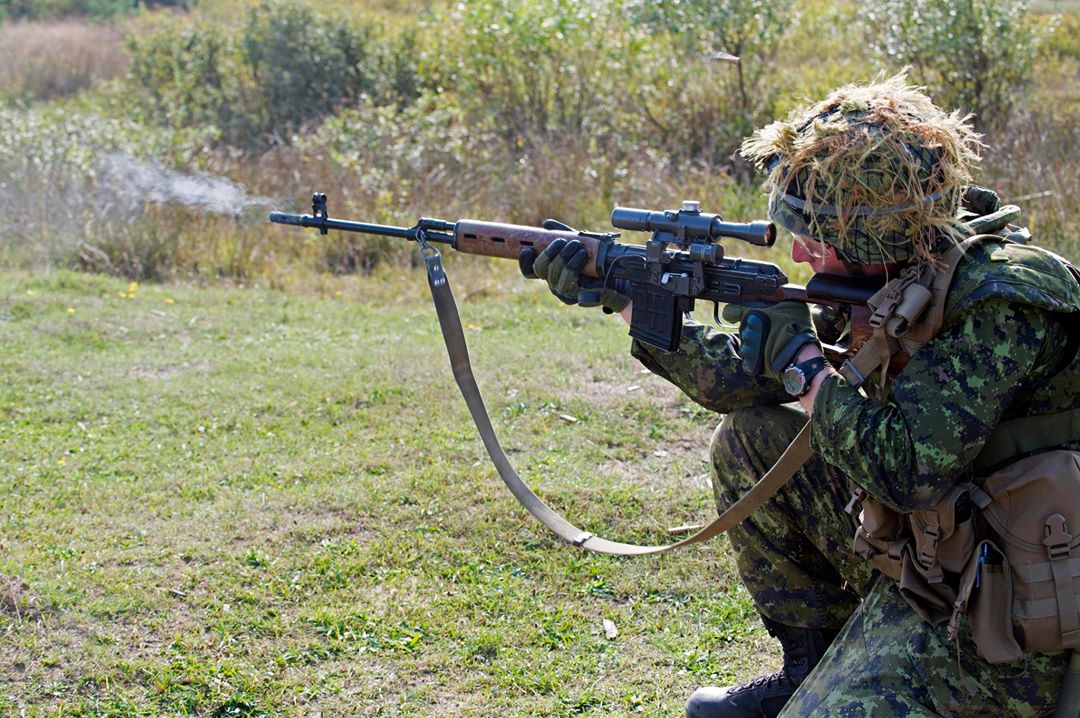 
More than a dozen Canadian-made contenders have been whittled down and one, known as Prototype J, is now undergoing trials. A new pattern will be rolling out no later than 2022. 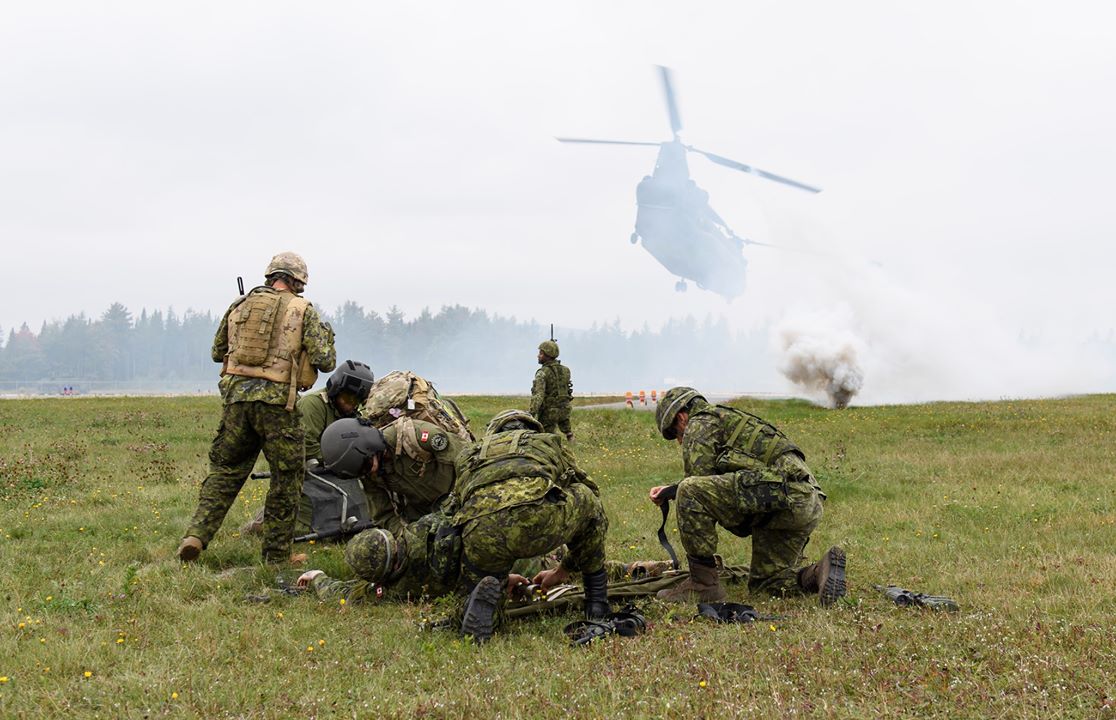 That the CADPAT Temperate Woodland (TW) pattern was suitable in jungle as well as woodland may have been a happy accident, but it pointed the way to more current trends toward multi-environment patterns, including the one now being introduced here in Canada.

That presents a new set of challenges, Jean Dumas, a scientist with Defence Research and Development Canada said, that provide a rationale for keeping the Arid Regions (AR) pattern in service.

“The Army wanted one pattern that does it all but I said to them, ‘That's physically impossible.’ In arid parts of Southwestern California for example, if you go down into a valley there's always some green, even in the summer, so the soldiers don't need a full arid. The one we’ve developed has also been tested there and it works with the browns and the greens, but if you go on the hills, on dunes, or you operate in a mountainous area, then you need a full arid kit to be concealed.”

“You cannot have a camouflage pattern that works everywhere on the planet,” he added. “It’s impossible. There's always too much light, too much dark, too much green. You can do an average. Camouflage is not an exact science. I call it the average of average.” 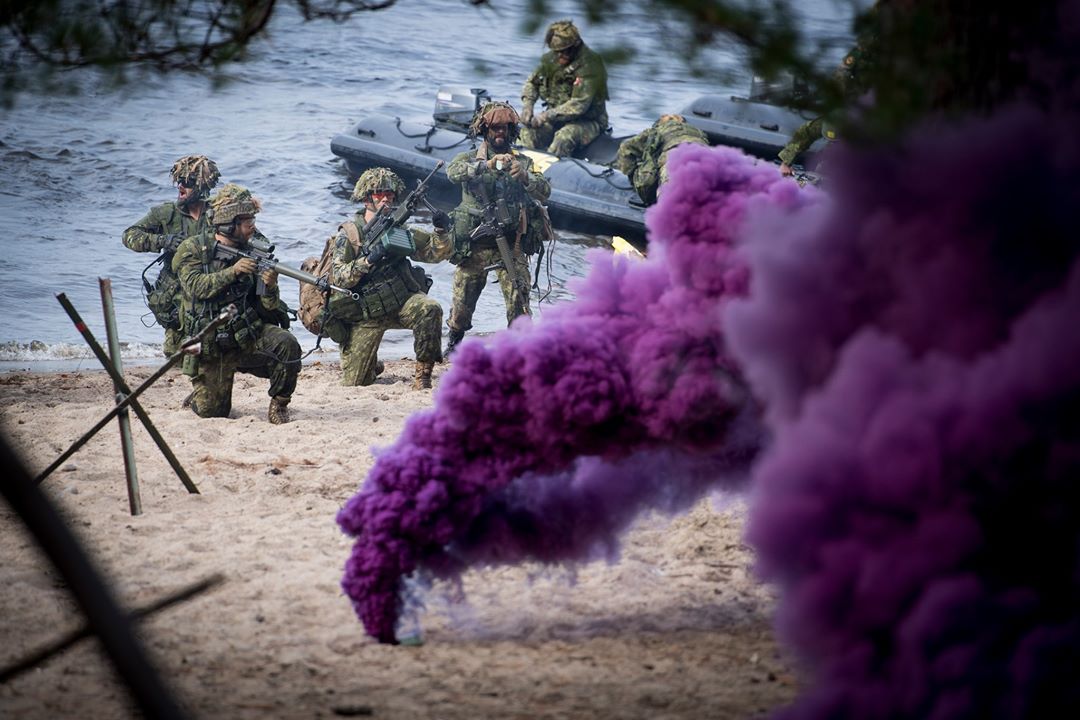 
Inexact as the process might be, Mr. Dumas said the work already done leaves Canada in an advantageous position.

“With both the new and old CADPATs, we came out with the three or four best contenders and then we did an evaluation in the field. And then we decide which one is, on average, the best. We don’t know if it’ll be that one or that one, but we know we’re in the sweet spot.”

“All of the changes are based on the operational need,” noted Major (Retired) Doug Palmer who worked with the Canadian Army’s Directorate of Land Requirements. “So if the detection capability of the other side has improved, then you need to modify your pattern to better give you your capability not to be detected. So I’m not surprised that we’re moving away from CADPAT.”