War room: From battlefield to the boardroom, vets are scaling the corporate rank

War room: From battlefield to the boardroom, vets are scaling the corporate ranks 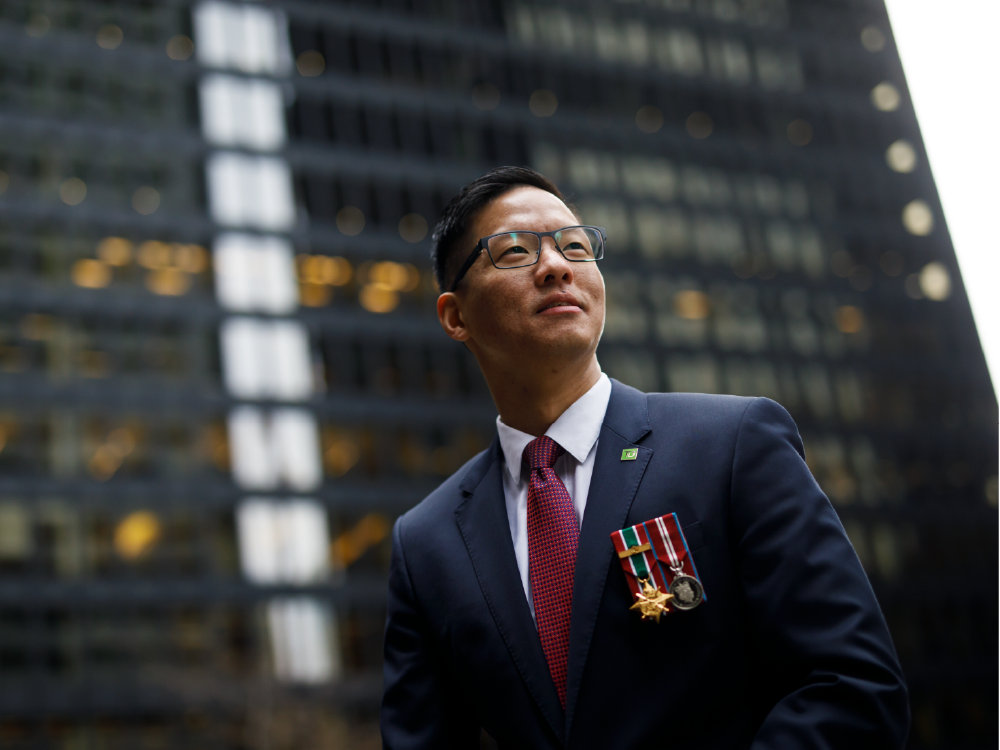 Jason Hsiung was sipping tea in a food court in Toronto’s financial district, recalling his formative years and how admittedly nerdy it sounds telling people he developed a sense of duty and self-sacrifice from watching Star Trek as a kid. Far less nerdy was his decision during his final year of high school to present himself at a military recruitment centre with the stated ambition of becoming a fighter pilot. It was a lofty goal, one the military recruiter dashed to earth by informing the aspiring pilot his eyesight wasn’t up to snuff, and then suggesting he consider joining the infantry instead. “I’d never even been camping,” Hsiung says. “But I said, ‘Sure, why not.’”

That reply ultimately led Hsiung to the battlefields of Afghanistan and, indirectly, to his current post-army career as a hard-working, tell-it-like-it-is boss; a 33-year-old associate vice-president at TD Canada Trust tasked with enhancing the bank’s “operational” excellence.

Canadians of a certain age can recall an era when Second World War veterans weren’t a shrinking pool of shrunken senior citizens glimpsed annually, if at all, on Remembrance Day, but active participants in the country’s daily life. Veterans were parents and grandparents, teachers and coaches, politicians and bank managers, and living proof of a time, way back when, when the good guys rid the planet of Adolf Hitler.

Less visible, and far less numerous are the modern guys and gals whose career trajectories didn’t start by graduating with a commerce degree and leaping on the corporate ladder at first chance, but, like Hsiung, with eight years in uniform, including an 11-month stint as a Canadian lieutenant embedded with an American unit in Kandahar Province.

Hsiung isn’t one for telling war stories around the bank, unless asked, and when he is asked, he typically keeps it light by, say, throwing out a goofy yarn about being caught in a rough spot without any toilet paper. Press him, however, and he will discuss his role as the Canadian representative in a fully-digitized American command post at a forward operating base in a fiercely contested region of Afghanistan. An environment where the Taliban wanted to fight “every day,” and where terrible things, such as two local kids being killed by friendly fire and an 18-year-old soldier being blown to bits in the mess hall during a rocket attack, were facts of life. “You’re dealing with life and death every day,” Hsiung says.

Hsiung left the army in April 2012, armed with combat experience and an engineering degree from Toronto’s Ryerson University, but had zero luck, at least at first, in getting even one of the dozens of potential employers he contacted to give his resumé a serious look. “I didn’t get any calls for an interview,” he says.

Such dismissiveness is something Cliff Trollope, a former lieutenant colonel in the Canadian army, can relate to. He is among the founders of Treble Victor, a network of 300 (and counting) veterans — lawyers, entrepreneurs, business consultants and more — committed to looking out for one another in their civilian careers, while helping newbies fresh out of the service find their feet.

Trollope feels the general public’s perception of army leadership boils down to a lot of “yelling.” He isn’t much of a yeller, but he is an ex-soldier long trained to plan, analyze situations, think strategically, act tactically and operate in “chaos,” which is a good metaphor for business, at times. Those qualities make him an ideal senior partner at MNP LLP, running the accounting giant’s risk management division, disaster proofing clients against everything from cyberattacks to natural disasters. “I look at my 23-year army career as the greatest MBA you could possibly get,” he says.

The hardest thing for a soldier is getting that first job out of uniform - Cliff Trollope
Click to expand... 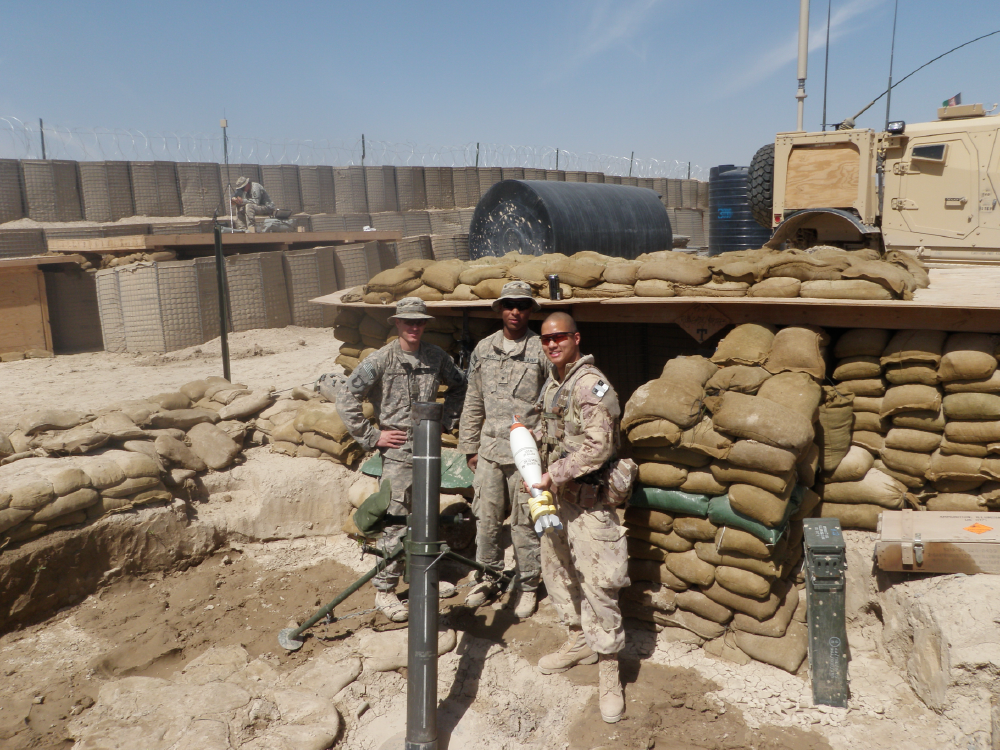 Jason Hsiung, right, holding a mortar during service in Afghanistan.

Though Trollope served in hot spots around the globe, he says none of that seemed to matter beyond the barracks when he first swapped his uniform for a suit in 2007. “The hardest thing for a soldier is getting that first job out of uniform,” he says. “One of the challenges, I believe, is that Canadians don’t really understand our modern military.”

Hsiung certainly faced that challenge until an internet search connected him to Canada Company, a not-for-profit founded in 2006 by Blake Goldring, executive chairman of asset manager AGF Management Ltd. Part of Canada Company’s mission is to bridge the divide between the battlefield and the boardroom. Hsiung met for coffee with someone at the organization who tweaked his resumé. Within two weeks, he had a job.

Although Hsiung is now an established banking executive, his army training still forms the bedrock of his professional self. Take his shoes: he never pays to get them shined, since he knows he can do a better job. He still runs a six-minute mile, too, and can bang off 25 pull-ups in a pinch. He even irons his own shirts. Greater than his personal grooming skills is his capacity to find solutions to complex problems, and to stay calm amid the proverbial storm. There is always an answer, in his view, you just need to work at it, and you need to be willing to tell senior executives what does and doesn’t work.

“Effective communication is an important skill I learned in the military,” Hsiung says. “When you are on the radio with a fighter pilot, for example, you have to be brief, and you have to be concise. You can’t say, ‘I think this Taliban is just over the ridge.’ You say, ‘Here are the coordinates. This is what I want you to do. End of story.’”

Hsiung takes the same approach in the corporate world. The straight take may rankle some, but it hasn’t prevented him from becoming a vice-president with a team of six people reporting to him and an office on the fifth floor. Hsiung keeps two photographs on his desk. One is from his post-army career, and shows him with a Canadian flag at Everest base camp. The other is from Afghanistan, riding in a Blackhawk helicopter, wearing full combat gear, peering out the window at the world below. “I keep that picture on my desk as a reminder,” he says. “There are long days at the office, but there are no bad days. No one is trying to kill you. It is just work.”
Click to expand...

Veterans struggle to find work after military: "We still want to give the best of ourselves"