My apologies if this has already been posted. 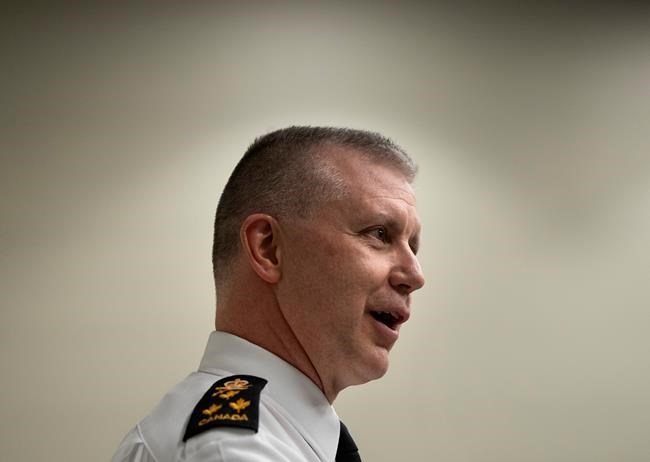 OTTAWA — The federal Liberal government has tapped a sailor to steer the Canadian Armed Forces, appointing Royal Canadian Navy commander Vice-Admiral Art McDonald as the next chief of the defence staff.

Prime Minister Justin Trudeau announced McDonald’s appointment during one of his regular COVID-19 updates on Wednesday, ending months of speculation about who would succeed Gen. Jonathan Vance as Canada’s top military commander.

“In his new role as chief, Vice-Admiral McDonald will oversee the work of the Canadian Armed Forces, including on vaccine rollout through Operation Vector,” Trudeau said in reference to the military’s role distributing COVID-19 vaccines across Canada.

“I know that Vice-Admiral McDonald's leadership and expertise will be invaluable as the armed forces continue to work around the clock to keep Canadians safe.”

A former frigate captain who oversaw part of Canada’s humanitarian response to the devastating earthquake in Haiti in 2010 before commanding the country’s Pacific fleet, McDonald will be the first naval officer to serve as the permanent defence chief since 1993.

A change of command ceremony is planned for the week of Jan. 11, when McDonald will formally take over from Vance.

Wednesday’s announcement followed months of speculation around who would succeed Vance, who first announced in July that he was planning to retire after more than five years at the helm.

Much of the speculation had revolved around whether Trudeau would appoint Canada’s first-ever female chief of the defence staff by tapping Lt.-Gen. Christine Whitecross for the job.

Not only was Whitecross the highest-ranking woman to have served in uniform, she also led the military’s early efforts to crack down on sexual misconduct in the ranks following the launch of Operation Honour in 2015.

Trudeau also raised eyebrows when he declared in an interview last week that one of the next defence chief’s top priorities would be to crack down on right-wing extremism, white supremacy and hate in the Armed Forces.

Yet McDonald’s appointment speaks to another looming challenge for the military and Liberal government: the ongoing effort to build a fleet of new warships for the Navy, and concerns the $56 billion set aside by Ottawa for those 15 ships won’t be nearly enough.

The parliamentary budget officer will release a report next month on the expected costs of those warships. There has been a great deal of handwringing inside the Department of National Defence and some corners of government that the price will be billions higher.

That would set off a fresh round of lobbying by defence companies — and add more pressure on the government — to abandon the project, which is supposed to see 15 Type-26 frigates built at Irving Shipyards in Halifax over the next 20 years, and go another route.

It is also likely to force some tough discussions within the military and government about whether to throw more money at the project, which was originally budgeted at $24 billion when it was launched in 2011 — or dramatically scale back the plan.

While the government made no mention of the warship project as it announced McDonald’s appointment on Wednesday, Defence Minister Harjit Sajjan said the new defence chief will be responsible for continuing to implement the Liberals’ 2017 defence policy.

That includes spending billions of dollars over the next 20 years on new equipment.

Sajjan said in a statement that McDonald will also “continue the work to transform the culture of the Canadian Armed Forces to ensure zero tolerance for sexual misconduct and harassment while eliminating hateful conduct and systemic racism from the organization.”

Trudeau and Sajjan also thanked Vance for his service, including his more than five years as chief of the defence staff, the longest-ever tenure for a Canadian military officer in that position.

Vance took over as defence chief in July 2015 as the military was fighting the Islamic State of Iraq and the Levant in the Middle East and struggling to deal with complaints about sexual misconduct at home. His first order was to establish Operation Honour.

McDonald will be the first naval officer to serve as the military’s top commander since vice-admiral Larry Murray filled the position on an acting basis in 1996-97. The last sailor to hold the position on a permanent basis since Admiral John Rogers Anderson in 1993.

This report by The Canadian Press was first published Dec. 23, 2020.

Army.ca Veteran · From Kingston, ON

I do not know much of him but given the focus on the navy especially with the rebuilding of the fleet I am not surprised by a naval officer becoming CDS, its been a long time since we last had one. Congrats to him!
W

Wow......quite surprising, and not in a negative way. I wish the Admiral/New CDS all the best. He is floating into a "shit storm" regarding the acquisition of new fighter jets, the building of the navy's surface combatants, and all of the other continuing issues within the CAF. His credentials are impressive; knowledge & experience will guide him. Time will tell.

While this may been mentioned in passing once or twice elsewhere on this forum, "circumstances" probably delayed discussion of what is probably the first faux pas of the new CDS. Though the recent controversy surrounding his predecessor is a much more salacious cockup that he will have to deal with, that is not of his doing. 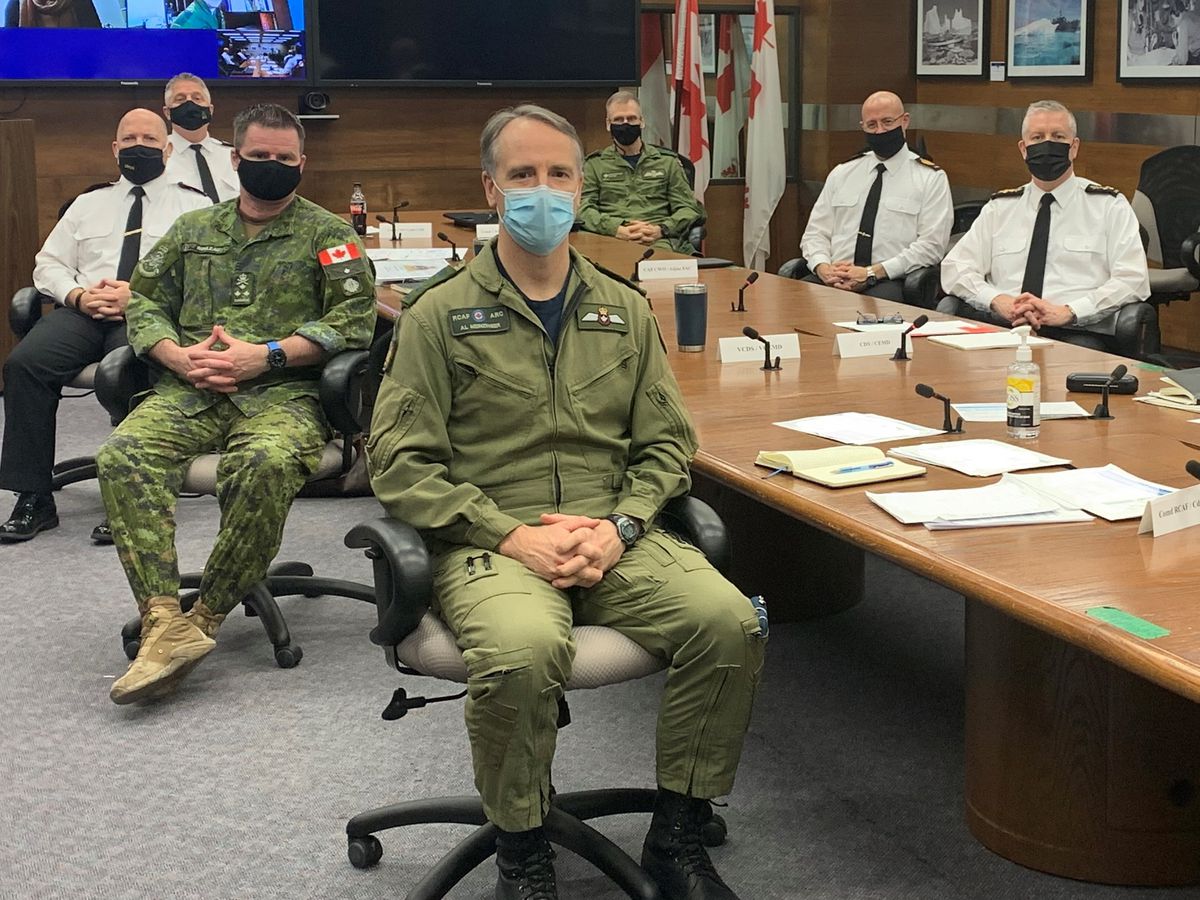 Admiral Art McDonald later responded to the online backlash that followed: "I hear your comments and I take them to heart."

Canada’s recently appointed chief of the defense staff is being criticized for a tweet about diversity in the military with a photo featuring eight white men.

On Thursday, Admiral Art McDonald shared a message that was likely intended as a nod to the military for its efforts toward inclusion at the highest levels of Canada’s armed forces.

Unfortunately, the picture he chose to capture the moment ended up missing the mark — and Twitterverse made sure that the admiral understood that his uplifting message was just another reminder of what the country needs, in terms of diversity. 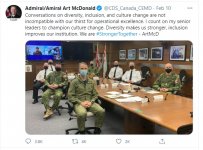 Though it was a "shake your head moment" re diversity messaging, what struck me (the old fart traditionalist that I am) was the dress. In that photo, and another probably from the same meeting, the most professionally dressed (for the real battles that they have to face in Ottawa) were the sailors. 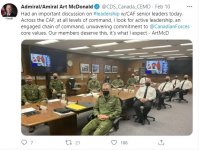 Oh look! There's a woman in the second photo . . . or at least someone not suffering from male pattern baldness .
D

First photo does include LGen Frances Allen, Canada's military representative to NATO, on the screen to the rear of the photo.

As the highest ranking Aboriginal member of the Canadian Armed Forces, Brigadier-General Jocelyn Paul has taken full advantage of the ‘limitless opportunities the Forces have to offer’ throughout his distinguished career.

I worked for McDonald in 2017 on OP LENTUS for a couple of weeks.

I thought he was excellent, all round, based on the fairly limited interaction I had with him. Very knowledgeable, polite, and respectful of all ranks, I'd probably put him in the category of one of the top 20% of the Senior Officers I've ever worked with.

I have no doubt that his OODA loop is spinning right now and will be surprised if something like this catches him out again.

(Oh, and just in case you're wondering, I'm safely retired now so no need for me to do any brown nosing!)

Nice to see that one element knows how to dress for an office environment.

Sorry! Just one of my hang-ups with HQ people.

The PA folks we hired for social media have to literally be the worst. From CAFIntheUS putting things up that would get any other troop charged to this tone-deaf picture... Hopefully Adm Art cleans house...

PuckChaser said:
The PA folks we hired for social media have to literally be the worst. From CAFIntheUS putting things up that would get any other troop charged to this tone-deaf picture... Hopefully Adm Art cleans house...
Click to expand...

Then he better start with his own staff. PA advised against this.

Canada’s chief of defence staff to step aside amid CFIS investigation: defence minister​

It was not immediately clear what the investigation was in regards to. 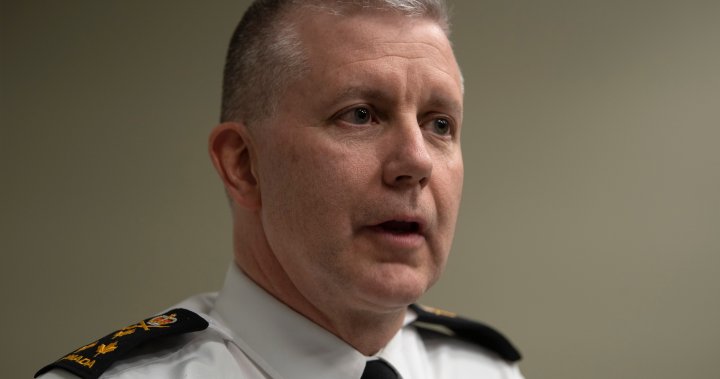 Sajjan said he has appointed Lieutenant-General Wayne Eyre as Acting Chief of the Defence staff.

Beat me to it, this is growing into a huge scandle for the CAF

Releasing this at 11:30pm seems peculiar.

I was having a conversation the other day about Navy CDS' being replaced early.

And, just for the record, this from the Info-machine ...

I was informed that Admiral Art McDonald has voluntarily stepped aside while the investigation is ongoing.

As of February 24th, I have appointed Lieutenant-General Wayne Eyre as Acting Chief of the Defence Staff.

I will have no further comment at this time due to the ongoing investigation.
Click to expand...

Oh, swell! So since Comd CA is now A/CDS, does that mean the CDS will ever come back if he's proven innocent?

OMFG. Glad I am not doing "issues management" anymore.
D

Gorgo said:
Oh, swell! So since Comd CA is now A/CDS, does that mean the CDS will ever come back if he's proven innocent?
Click to expand...

That is the theory, yes.

Or people have had enough and are coming forth with stuff that they have kept secret for years. Hard to say.
You must log in or register to reply here.