Two soldiers in the Queen’s elite Coldstream Guards regiment have been arrested on suspicion of stealing ammunition.

Met officers swooped yesterday on two addresses. The operation was supported by the Royal Military Police and Ministry of Defence Police.

Last night Scotland Yard confirmed that a quantity of ammunition had been recovered during one of the raids on a residential address. The ammunition is said to be 9mm calibre and is used in pistols.


A police spokesman said: ‘A man in his 30s and a man in his 40s were arrested on suspicion of possession of ammunition and conspiracy to steal.​

'They have been taken to a nearby police station where they remain in custody.’

An MoD spokesman said: ‘We can confirm that two soldiers have been arrested on suspicion of firearms offences. We are assisting the Metropolitan Police with their investigation.’

Last night troops were warned not to speculate about the case.

The Coldstream Guards is the oldest continuously serving regiment in the British Army. The Army’s website describes it as ‘well-known for its high-profile ceremonial duties – but it’s an infantry unit first and foremost, with a hard-won reputation as an elite fighting force’.

Coldstream Guards have a ceremonial role as protectors of Royal palaces, including Windsor Castle and Buckingham Palace.

It is among the units authorised to wear the bearskin cap.

It has been active since 1650. The regiment’s name comes from troops spending three months in the town of Coldstream in the Scottish borders in 1659. Thirteen members of the Coldstream Guards have been awarded the Victoria Cross, and one the George Cross.

Nicknamed the Lilywhites, the regiment’s motto is ‘Nulli Secundus’ – second to none.

Former members include Day Of The Jackal actor Edward Fox and Tory MP Richard Drax. Notable events involving the regiment include the capture of New York in 1776 during the American Revolutionary War. 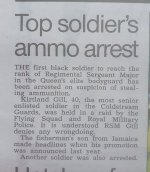 Never good when an RSM is arrested.

Knowing the brits and their media's trembling fear of anything firearm related, it could be they were in the process of making some ceremonial award out of ammunition bits. My opinion of British media dropped considerably when I saw the fear mongering over someone discovering some .22cal bullets in their yard.
You must log in or register to reply here.

At least we could (probably) invade New Zealand: How small is the RCN, really?