It’s low tide, and the beach is literally littered with history. Picking up a chunky piece of 500-year-old roof tile worn oval by the centuries, with its telltale peg hole still clearly visible, David explains that these red clay tiles were heavy, requiring large timbers for support. In the 16th century, when large timbers were required for shipbuilding for the Royal Navy, lighter slate tiles became the preferred roofing material. Over time, the heavy, red-clay tiles migrated from the rooftops to the riverbank…and into the pockets of beachcombers like us.

Like kids on a scavenger hunt, we study the pebbles. David picks up a chalky white tube. It’s the fragile stem of an 18th-century clay pipe. Back then, tobacco was sold with disposable one-use pipes, so used pipes were routinely tossed into the river. David lets it fall from his fingers. Thinking, “King George may have sucked on this,” I pick it up.

While skidding about the banks of that one-time London sewer called the Thames River may have caught your attention, many pleasant memories have been refreshed by Rick Steves' more continental pursuit. 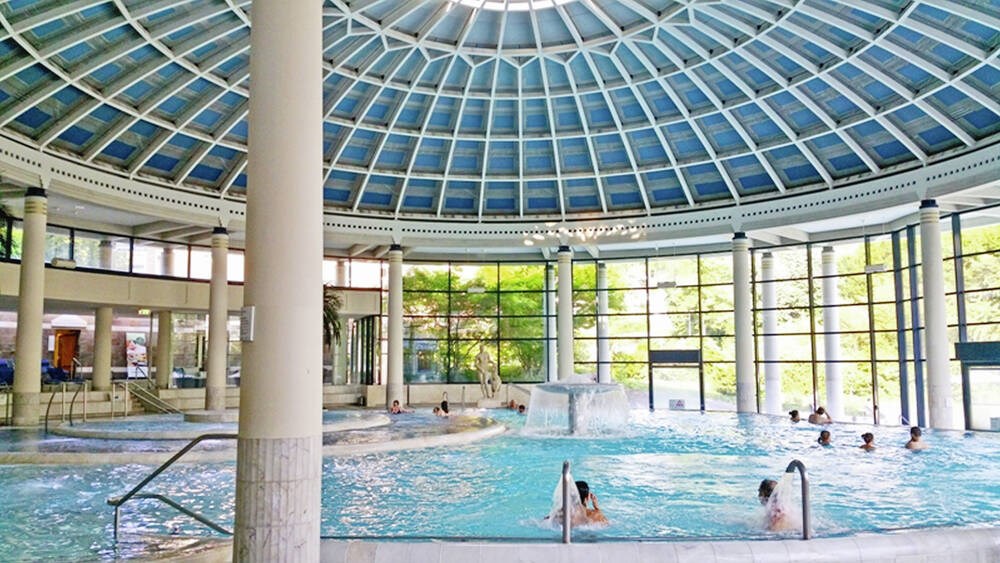 Rick Steves: Getting naked with strangers in Germany's Baden-Baden spas

Ever since the Roman emperor Caracalla bathed in the mineral waters here, Baden-Baden has welcomed those in need of a good soak

Relaxing at the spa resort of Baden-Baden in southern Germany’s Black Forest, I see more naked people in two hours than many Americans see in their entire lives.

Ever since the Roman emperor Caracalla bathed in the mineral waters here, Baden-Baden has welcomed those in need of a good soak. In the 19th century, the town was Germany’s ultimate spa resort, and even today, the name Baden-Baden is synonymous with relaxation in a land where the government still pays for its overworked citizens to take a little spa time. And since the beginning, the dress code in these spas has always been “naked.”

Americans who can’t handle nudity don’t know what they’re missing. My first time to Baden-Baden’s venerable Friedrichsbad spa was with some German friends — a classy, good-looking young couple. We were swept into the changing area with no explanation. Suddenly they were naked and I felt like the Road Runner just beyond the cliff’s edge. Then — easing up, and stripping down — I realized that a European sauna isn’t a sexy space, but simply open and free.

For me, enjoying the Friedrichsbad Roman-Irish Baths in Baden-Baden is one of Europe’s most elegant experiences. Traditional, stately, indoors, these baths are extremely relaxing … and not very social. It’s just you, your body, and an unforgettable experience.

The Friedrichsbad was my favourite recovery process the morning after an exuberant mess dinner or similar overindulgence (it was less than 15 minutes from the base). It was more appropriately a solitary pleasure. If a group wanted a social outing, then the Caracalla Therma was the preferred location. However, you had to be prepared for unexpectedly meeting (while naked) persons you didn't necessarily want to see in the buff.
Last edited: 22 Jan 2022

Blackadder1916 said:
However, you had to be prepared for unexpectedly meeting (while naked) persons you didn't necessarily want to see in the buff.
Click to expand...

That was my experience too with Wreck Beach.

We had to do medical evacs from Wreck beach, never the nudes you wanted to see.

Colin Parkinson said:
We had to do medical evacs from Wreck beach, never the nudes you wanted to see.
Click to expand...