The British Army has unveiled its latest state-of-the-art equipment for combat infantrymen, which will enter service with troops fighting in Afghanistan and Iraq within months.

Out goes the familiar and distinctive 'pudding bowl' shaped helmet worn by Britain's soldiers for 20 years, and in comes a new shape more akin to today's U.S. Army helmet, or the Second World War German design - offering improved neck movement and more space to fit a rifle sight to the eye.

The new colour scheme has nothing to do with fashion and everything to do with new high-tech fabric dyes which maintain camouflage properties when viewed through infra-red night sights, and combine traditional desert colours with pale green shades - suited to the semi-desert environments where many of today's battles are fought.

Five years after the Daily Mail first exposed the Army's notorious melting desert boots and shortages of basic equipment on the eve of the 2003 Iraq invasion, senior military commanders insist the situation has been transformed for the better.

The Treasury has spent £1billion a year on the 'Urgent Operational Requirement' programme - rushing new kit into service in Iraq and Afghanistan when existing equipment proves to be dangerously inadequate - delivering a range of new armoured vehicles, weapons and clothing.

While shortages remain, and commanders remain frustrated by the need for more protected vehicles and helicopters, frontline troops acknowledge the improvements in personal equipment.

The new infantryman's kit is known as project PECOC - Personal Equipment Common Operating Clothing - and is in the final stages of assessment before being issued to troops deploying on combat operations.

Designers are struggling to save weight across the board, because of recent feedback from commanders in Afghanistan warning that today's infanteer is being expected to carry too much weight, often approaching 150lb of weaponry, armour, ammunition, food and a host of gadgets - 'like going to work carrying your wife on your back' as one soldier described it.

In soaring summer temperatures of 50 degrees centigrade, foot patrols are having to be equipped with more quad bikes and trailers to take some of the burden, and to help evacuate wounded troops.

Major Richard Coomber of the Royal Electrical and Mechanical Engineers, requirements manager for the PECOC programme, said: 'We have scoured the world for the best materials.

There is no magic secret to saving weight. We have to get the integration of all the different items right, starting with body armour plates which are thinner but tougher, and better designed to fit with webbing, packs, and weapons.

'We spent a lot of time talking to troops who are using the existing equipment on operations.

'The result is a system designed to fit together, and to be as flexible as possible, so the soldier can adapt it to the job he's doing.'

The new clothing features removable padding inserts at the knees and elbows, and new 'coral-coloured' ballistic eye protectors, which give better colour perception than existing sunglasses.

Weaponry is constantly being upgraded, and the SA-80A2 assault rifle - which appears finally to have shaken off its unreliable reputation - is now fitted with an underslung grenade launcher and improved sights.

At a facility to show off the new kit on Salisbury Plain today Major General Bill Moore, Director General Logistic Support and Equipment for Land Forces, told the Mail that speed was the key to the Urgent Operational Requirement system.

He said: 'In peacetime you can afford to spend five or ten years getting the reliability of your new tank just right, but in wartime we take a bit more risk with getting new equipment into service fast.

'I think the next big thing for us is reducing weight for infantrymen, to make them more agile.

'If we can make electrical batteries smaller and lighter, we will make progress.

'We want to give the guys more options as to how much heavy protection they wear, depending on the threat and the task.' 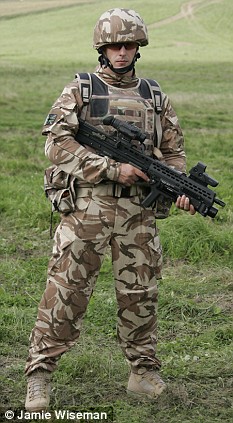 Equipment of the future: The British Army has unveiled the new kit which will go into service in months 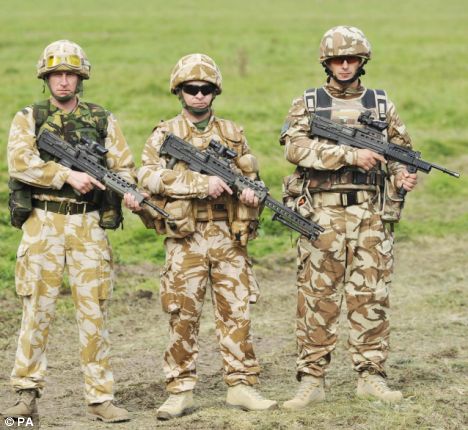 British Army gear through the ages: (Lto R) SA80 weapon and kit prior to 2003, the current attire and a soldier wearing a trial outfit

Unless they are referring to the Mk III (known as the Third Div or Invasion Helmet in Canadian Service).  I believe that was the common National Service helmet through Korea into the 60s.

looks good. Hopefully the gear works out well for the men fighting with it on. Is the new vest modular or anything like that?

It's too bad we can't push ahead at the same pace in regards to replacing some of our equipment: tacvest, design of cbt clothing, boots, wpns sight.......  Good on them for going with a commercial boot and giving the soldiers a choice of two designs, Meindl or Lowa.

Unless they are referring to the Mk III (known as the Third Div or Invasion Helmet in Canadian Service).  I believe that was the common National Service helmet through Korea into the 60s.
Click to expand...

That wouold be 'through to the 1980s. I used the horrible things during training and they bounced up and down on your head due to the elastic chinstrap, resulting in a big dent in the top of your noggin from the bolt that held the liner to the metal. Thank God I was issued with an Airborne helmet.

The New Lightweight Bullet That Saves Fatigue ... And Fuel
2