Maybe your right. I haven't been posted to Borden, so my awareness of the area is very slim. I need a map of the area to refresh my mind. I"ve only been there on course for a few weeks and then the Trucker National's a few times.

And your right, EATD is that fancy driving course.

DCRabbit said:
I guess the objective is to wait until they collapse.. then claim there's no way they can be restored and the only thing left to do is clear away the debris. Hands are tied, I guess.
Click to expand...

It doesn't work that way.  There are certain obligations that individual government departments (including DND) have with regards to government buildings that have been designated as heritage properties.  Just because a structure is old does not mean that it will be designated a heritage building.  By the same token, Government of Canada buildings (with some exception for National Historic Sites and the like) are not usually maintained for the "sole" reason that it is a heritage building; it is supposed to be used.  The following are the heritage buildings at CFB Borden.

The primary objective of the Federal Heritage Buildings Review Office (FHBRO) is to assist federal government departments in the protection of their heritage buildings, in accordance with the Treasury Board Policy on Management of Real Property. The policy applies to all federal government departments which administer real property but not to Crown Corporations. This means, for example, that many post offices and all railway stations are not covered by the policy.

FHBRO evaluates all federal buildings 40 years of age or older in order to determine heritage character. It makes recommendations to the Minister of the Environment, who is responsible for approving the heritage designations of all Government of Canada buildings. Through this process, buildings are designated as either Classified, the higher level of designation, or Recognized, the second level.

FHBRO also provides advice to federal government departments that wish to make changes, or interventions, to a designated building, to ensure heritage character is protected.

An update to this story in today's Barrie Examiner:


TORONTO - A military former base commander who served with the United Nations has lost a bid to return to head CFB Borden after being stripped of his power for inappropriate behaviour.

Capt. John Frederick Schmidt was removed from the top position in July 2008 following an incident in which he was drinking alcohol and inappropriately touched two junior female officers, according to court documents.

Schmidt, a 30-year veteran, went to a federal court, seeking a review of his removal due to "procedural unfairness."

He wanted the decision set aside and for a new probe to be launched.

Judge Robert Barnes recently tossed out the request, ruling that Schmidt admitted the incident to his commanding officer and did not answer questions about it when interviewed at another time.

Court heard Schmidt, a former teacher, was posted to Borden in February 2008.

In July that year, he told Maj.-Gen. Daniel Gosselin, commander of the Canadian Defence Academy, that he was under the influence of alcohol and had "behaved inappropriately" towards two students from the Canadian Forces School of Administration and Logistics.

"The two females complainants claimed Schmidt had made unwanted advances including invitations to come home with him," according to a military report presented to court. "The students expressed shock, disappointment and embarrassment over the incident."

The report said Schmidt had put his arm "around the waist of a second junior officer and invited her (to his home) as well."

An investigation was launched and Schmidt was ordered to resign his command or be removed before a report on the incident could be issued in August 2008. A written reprimand was also placed in his personnel file.

Schmidt filed a grievance against the decision to remove him but it was rejected by senior defence officials.


Barnes said if disciplinary measures were followed, Schmidt could have been demoted or released from the Forces.

"Capt. Schmidt has been able to continue his career in the Canadian Forces without any loss in rank," Barnes ruled, ordering Schmidt to pay $2,500 in court costs. "He has had the benefit of a full, fair and independent review."

Schmidt was appointed director general of finance with Chief of Maritime Staff in May 2009.

He previously worked as chief logistics officer at a UN headquarters in the Golan Heights, Syria.
Click to expand...

Capt(N) Schidt should be thankful that there was no court-martial, as he would probably be whining at a much lower rank had proper disciplinary action been taken.

That there was no court-martial for a Capt(N) playing grab-ass with students under his command is unfortunate.

Exactly... As stated in the Court Decision para 30

There can also be no doubt that Major-General Gosselin’s decision carried serious negative implications for Captain Schmidt.  He was removed from an important command position and received a written reprimand.  On the other hand, the process that was adopted by the CF was remedial in nature and not disciplinary.  Had the disciplinary process been invoked, the potential for demotion or full release from the CF would have arisen.  In the result, Captain Schmidt has been able to continue his career in the CF without any loss in rank.

Pretty gutsy, Capt but I wouldn`t push my luck....

He's actually retired now.  He saw the writing on the wall and moved on.

Good day all, hope everything is good where you are,

I came across a link on the NDCF website (http://www.borden.forces.gc.ca/998/89/36-eng.asp) and I need some help to understand what it means for civilians working on a base.

Is it actually possible for a civilian to work at CFB Borden, if there is a job posting?  Any and all information that anyone has will be appreciated!

It's all pretty much self-explanatory.

Okay, I just wanted to make sure I wasn't getting my hopes up over something that wasn't actually possible.  My boyfriends face lit up like a flash light when I told him about this option.

I'd be happy to work in Angus or Barrie even if it means I can stay near him, but the chance to work ON BASE is beyond my wildest imaginings purely because I'm still very new to dating a guy in the military. ))

There are plenty of civilian jobs on any CF facility.  If NPF doesn't pan out for you - try contacting the contracted kitchen staff.

How do I go about emailing them or calling?  Does kitchen staff pay better than what I've found?

I make 12.50/hr in my current job.  I am making money below the poverty line, and all the jobs I've found on bases around Canada or in Germany are under what I make now.  If I moved provinces I'd want to have the secured knowledge that I am not only matching my savings and earnings but doubling it at least.  Otherwise we're thinking I should stay here until he gets posted.
S

I am being TD on course in Borden for July and part of August and I am looking for someone on base to train BJJ with.  If anyone kniws someone please let me know.  I am only a wnite belt with first stripe and Im not looking for MMA style, get my arm broke training.

This is likely of interest to you:

Cool thanks I appreciate it 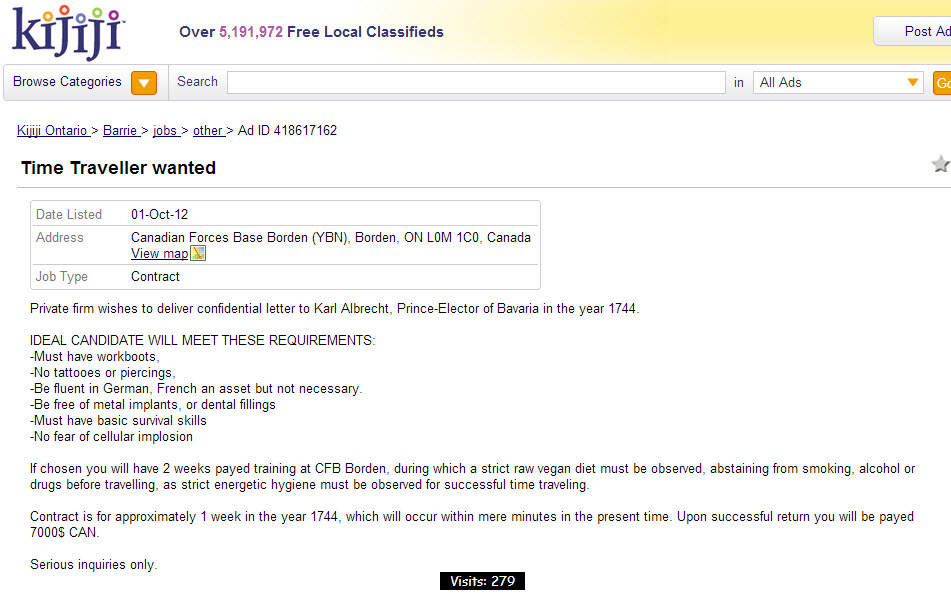 While at lest they are not trying to hook up the local whiskey dollies with the local livestock!
D

From the description I assume it's Cyberdyne Systems.


And if this one works out, next up is Sarah Connors.
You must log in or register to reply here.