Artillery rounds blasted from howitzers aboard Army landing craft during a recent training mission, the first time in decades that boats from the service’s little-known fleet of watercraft have conducted a fire mission.

Known as Operation Gator, the late April drill at Camp Lejeune, N.C., was believed to mark the first riverine artillery mission since the Vietnam War, and comes as the Army has been mulling plans to shutter its National Guard and Reserve component watercraft units.

The troops were training for the possibility that America’s next fight may be against what the military calls a “near-peer” adversary. In such a conflict, the U.S. may not be free to move its forces around as easily as in Iraq and Afghanistan.
We’re having to relearn some of the tactics for fighting a formidable enemy. It’s very different from the asymmetric warfare we’ve been fighting,” said Lt. Col. Shawn Talmadge, commander of the Virginia National Guard’s Norfolk-based 1st Battalion, 111th Field Artillery Regiment, in a phone interview Tuesday.

Being able to fire directly from a landing craft, rather than unloading the weapon and setting it up on dry land, can save time and possibly lives in battle with a closely matched enemy.

After a 90-minute boat ride up the Atlantic-Intracoastal Waterway, which runs through the North Carolina Marine base, the landing craft “stabbed” its bow into the riverbank to provide a stable firing position. The waterway was blocked to boat traffic to reduce turbulence that could affect the mission, which began April 25 after a day of rehearsals.

“Today is a proof of concept to say, ‘Hey, we can still do this,’” Talmadge said in the statement.

For the artillery regiment, which is part of the 116th Infantry Brigade Combat Team, it was the first waterborne fire mission since World War II’s D-Day landing, nearly 75 years ago.

The Army used watercraft extensively during WWII and often fired artillery from boats during the Vietnam War.

But the exercise comes nearly a year after Army Secretary Mark Esper decided last June that the Reserve would “divest all watercraft systems,” a decision highlighted in a January briefing prepared by the New Orleans, La.-based 377th Theater Sustainment Company, which oversees most of the Reserve’s boats. The Army confirmed in late January that it was conducting a formal analysis of its fleet inventory.

In March, the commander of the Baltimore-based 949th Watercraft Transportation Company announced the unit was slated to be inactivated in a ceremony in August.

The service’s aging flotilla includes eight types of watercraft, from small “Mike boats”— like the landing craft used for Operation Gator — to football field-length vessels able to carry up to 15 M1A2 Abrams tanks at a time.

Mike boats have been used to land small forces on hostile beaches dating back to the Vietnam War, but are now considered too slow to come ashore under fire, an Army Command and General Staff College research paper found in 2015. They get more expensive to maintain each year, and Lt. Col. Philip S. Raumberger, the paper’s author, said the Army needs to decide whether to keep them.

At Camp Lejeune last week, the 10th Marine Regiment, 2nd Marine Division and the Fort Sill, Okla.-based Fires Center of Excellence observed the two-day waterborne artillery exercise, the military statement said. Further details will be shared with the Fort Sill center and the Picatinny Arsenal in New Jersey to determine whether new doctrine is needed for using modern weapons on such fire missions, Talmadge said in the statement.

Talmadge, 44, has deployed twice during the Global War on Terrorism, but he told Stars and Stripes he remembers the days before 9/11 when the Army prepared for peer-to-peer conflict. The service is again looking to past wars to guide its future tactics, he said.

“We are studying our history, finding techniques that may be relevant today,” Talmadge said.

To support an amphibious assault I would think the Navy would provide fire support which would negate artillery firing from a landing craft ?

tomahawk6 said:
To support an amphibious assault I would think the Navy would provide fire support which would negate artillery firing from a landing craft ?
Click to expand...

Before the infantry landed on the beach, all artillery launched a saturation barrage against the enemy defences. Destroyers pounded the beaches, large landing crafts fired their 4.7-inch guns and Landing Craft Tanks fired rocket rounds. Four field artillery regiments of the Royal Canadian Artillery, in all 96 guns of 105-mm, embarked on 24 LCTs, moved toward the beaches simultaneously. From its craft the 12th Field Regiment opened fire against a fortified position in Courseulles. At 0655, the 13th Field Regiment attacked another position west of the cliff. At 0744, the 14th Regiment fired on a fortified position at Bernières and at 0739, the 19th Regiment attacked a similar post in Saint-Aubin. For 30 minutes they fired a steady barrage onto the beaches above the heads of the infantry approaching the shore in their LCAs.

The Royal Canadian Artillery field regiments landed on the 7th Brigade front at about 9:00 a.m. Delays in opening exits from the beaches prevented the field artillery from moving inland as soon as had been planned. Lt.-Col. Webb brought the guns of the 12th Field Regiment ashore and put them into action on the beach. The artillery was deployed side by side amid the confusion of men and vehicles, and then opened fire in support of the advancing infantry. In the late afternoon the regiment moved to its planned gun area between Ste. Croix and Banville. The 13th Field Regiment landed later and the first battery to land established itself south of Courseulles. By evening the whole unit was in its designated position adjacent to the 12th Field Regiment's.

On the 8th Brigade front, the self-propelled artillery of the 14th Field Regiment and the 19th Army Field Regiment, R.C.A., began to land at 9:25 and 9:10 a.m. respectively. They moved off the beach and the 14th had 18 guns in action near Bernières by 11:30 while the 19th had its first gun in action at 9:20. Both regiments had casualties in men and guns from enemy artillery fire. The regiments spent most of the day in action in improvised gun areas close to Bernières. In the evening the 14th moved forward to a planned area a mile north of Beny.
Click to expand...

1. 12 Fd Regt, RCA, was loaded into six LCTs with additional marching parties mingled with the res inf coys of the assault – bees, -R Wpg Rif, 1 C Scot R, and HQ 7 Cdn Inf Bde. The Channel crossing was rough – so rough that everyone was surprised to hear that the op was under way.

2. During the run-in Maj A G Goldie acted as Fwd Observer and directed the regt’s fire onto the WEST end of COURSEULLES, where he reported it to be effective, with rounds falling in the target area. 120 rpg were fired and the results in COURSEULLES were clearly visible to the gnrs after landing.

4. Maj Goldie found the beach exits blown by the enemy and the law ground SOUTH of the dunes flooded and impassable. It appeared as if several hrs work were: required before exits could be made ready. Meanwhile the guns served no useful purpose lying offshore. It was therefore decided to bring the craft in to the beach and to nut the guns in action at once. The scheduled time for landing was H + 75 mins; the actual time was very close -about 0900 hrs. The tide by this time had covered the obstacles so that the LCTs had to find their way through them. In some instances vehs were forced to wade off into deep water. But all guns were ashore and providing arty sp to the advancing inf in a short space of time. To the confusion of men and vehs on the beach was added the roar of the guns, firing from the water’s edge, with RHQ behind them literally in the water. 12 Cdn Fd Regt was thus the first unit in the div to bring down arty fire from land. No guns were lost, but two vehs were drowned.12th Field SP-ARTILLERY-FIRE-LCT-JUNE-1944

5. When the exits were opened the regt moved inland, one bty at a time so as to provide continuous sp, beyond the minefds to BANILLE area, where it remained for the balance of D-day and the following night.
Click to expand... 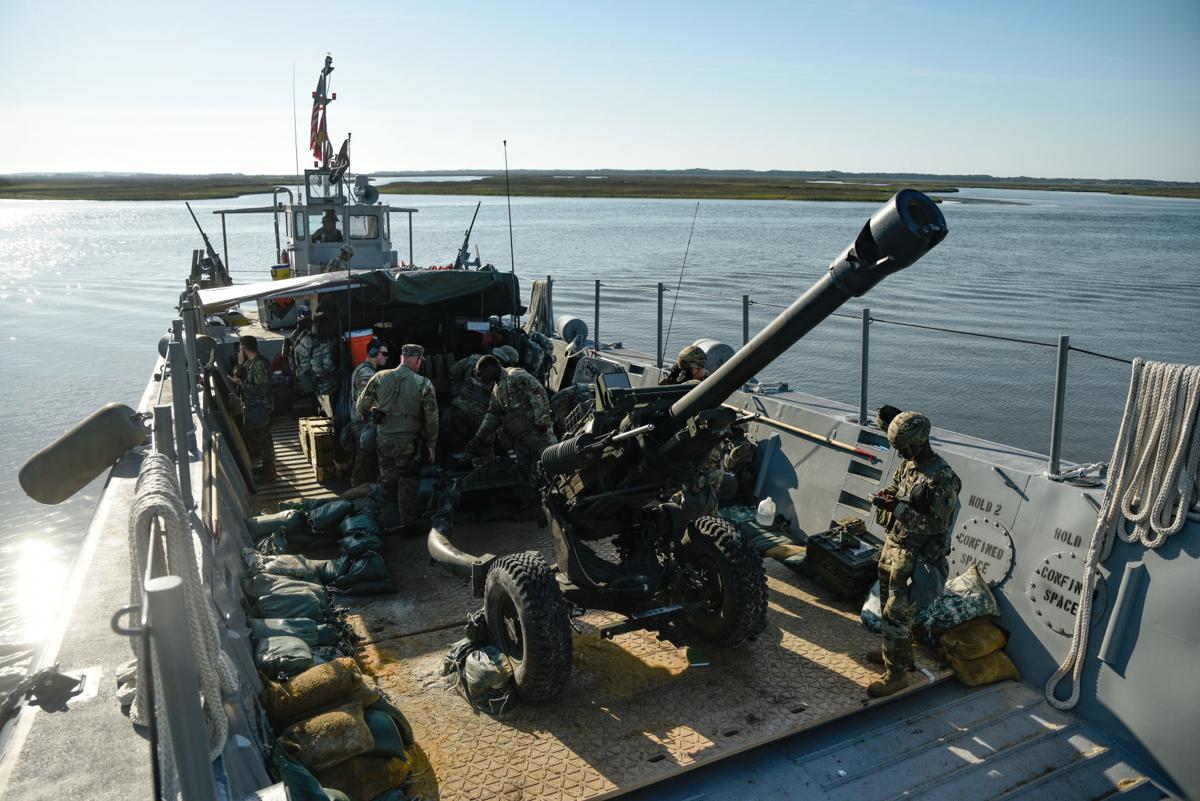