Somebody mentioned, upthread, about icing problems and the need to clear the tarps off the 25mm and that even the 57s had problems.

The Swedes seem to have solved that problem for their Visby Corvettes. Their 57s are totally enclosed. As are all their other major weapons systems - SSMs, Torps and Rheinmetal MASS decoy launcher. This has the additional advantage of the reducing the radar signature to something akin to that of a buoy, reportedly. 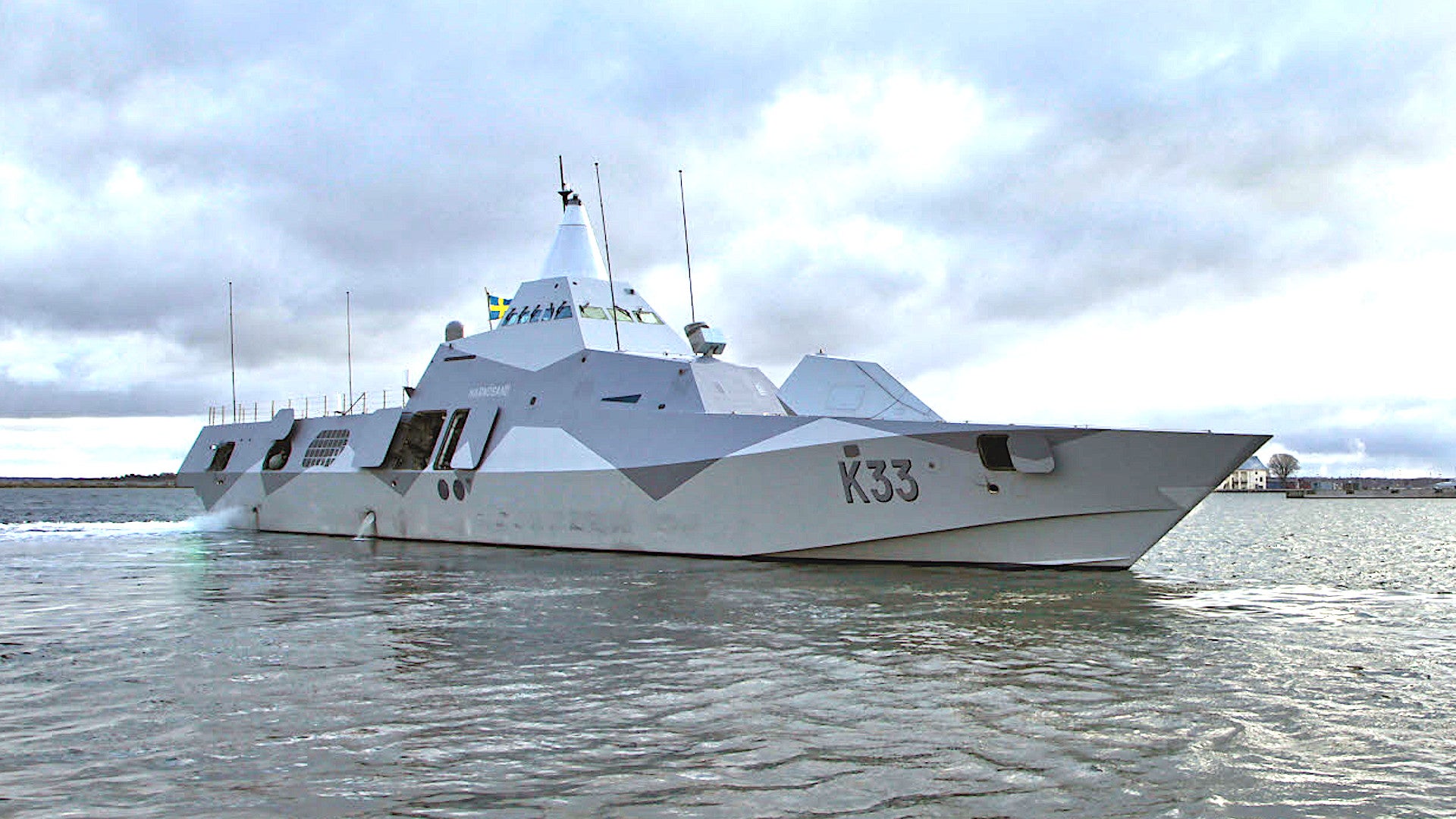 The ships combine a radar-deflecting physical design with composite materials and other features to achieve an impressive level of low observability. 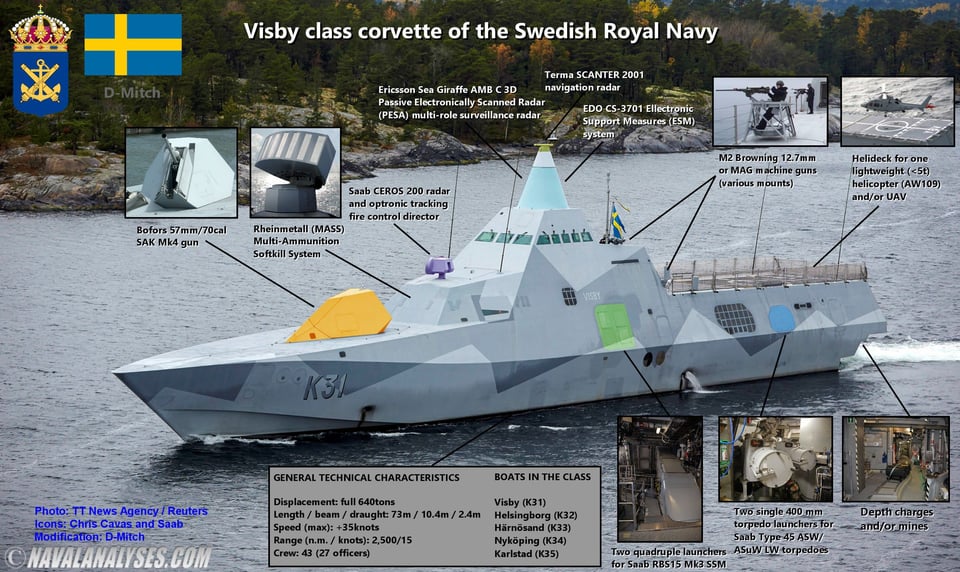 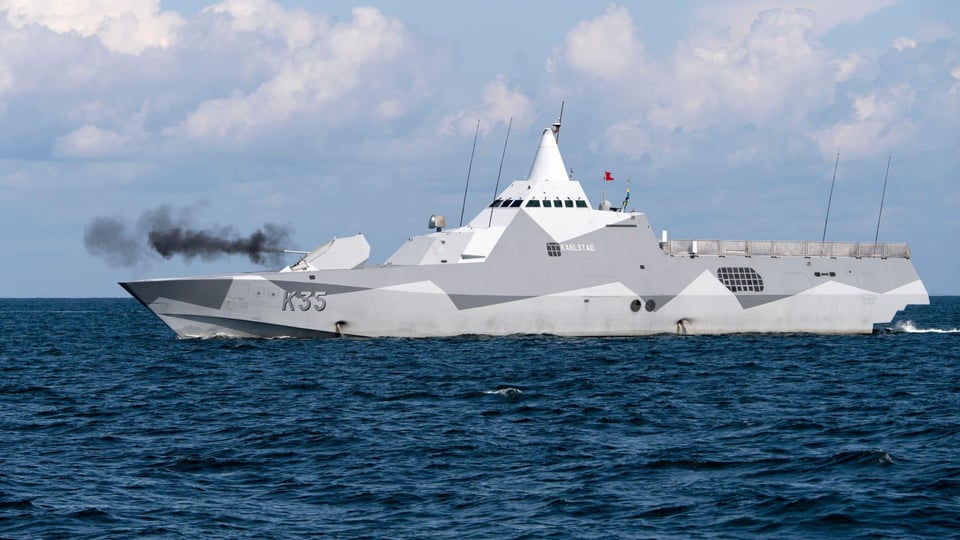 The Norwegians also hide their NSMs on their Skjold class "Corvettes" 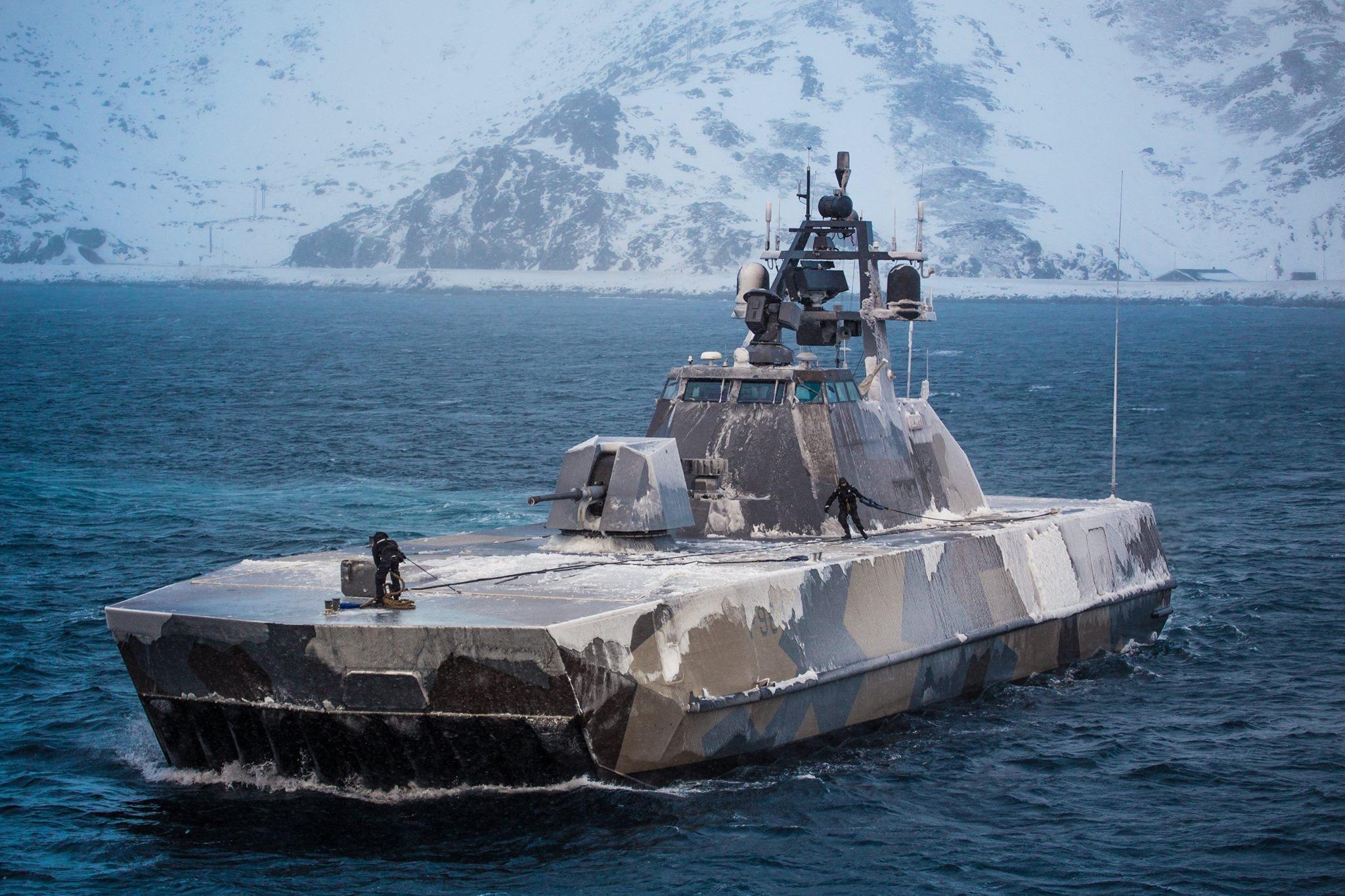 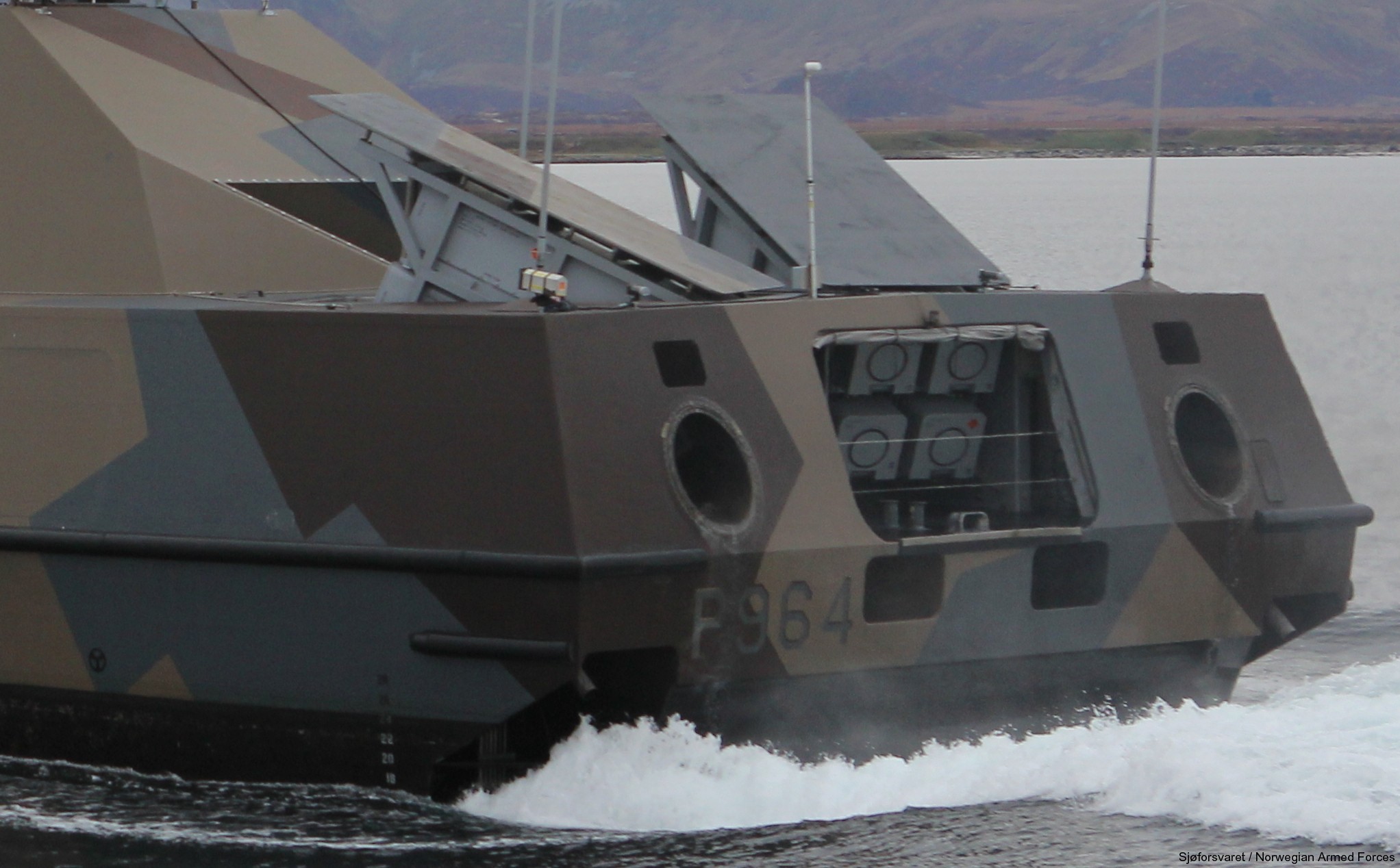 Additional advantage - beyond the James Bond Cool Factor - reinstate the command - "Run out the guns".

Colin Parkinson said:
As I recall generally sailing with an escort as well with the Queen onboard
Click to expand...

Seems the right thing to do. When the situation demands. Maybe she only needs a PB escort. Sometimes she may need a Carrier Group.

Isn`t it supposed to convert to a hospital ship in wartime or has that gone away?

Her last visit to Quebec City: Escorted on the Halifax to Quebec City by the naval reserves, employing HMCS FORT STEELE. Not single gun on her - not even a hand gun for the C.O.

And,yes, she could be converted into a hospital ship in wartime - but only after the threat of nuclear attack passed. Otherwise, she was the designated safe place for Her Majesty to take refuge at sea.
S

Did she not go the Falklands for a little fun in 1982?

Good God, no! They would have soiled the carpets. Though she did evacuate "refugees" from Aden in 1986. Hopefully they wiped their boots before boarding. I wonder what the Royal Yacht was doing in the Red Sea at the time?

On the 13th January fighting broke out in Aden. The ferocity of the fighting presented grave risks to the safety of British subjects. In those circumstances, and with the full agreement of Her Majesty the Queen, the Royal Yacht 'Britannia', which was just leaving the Red Sea, was ordered to remain off Aden; Her Majesty's ships 'Newcastle' and 'Jupiter', with the Royal Fleet Auxiliary 'Bramblelear, were ordered to Aden at full steam in case they were needed for an evacuation.

"The situation in the country continued to deteriorate and the level of fighting approached that of a civil war. After close consultation with the Russians and French, both in Aden and in the capitals, it was agreed that evacuation was necessary and that as far as possible our efforts should be co-ordinated. On the 17th January, Soviet merchant vessels lifted off from Aden about 1,000 people, mostly their own nationals. On the same day, the Royal Yacht took off 450 people, 38 of them British—44 nationalities altogether. Eighty-one French nationals were then transferred to a French ship, and the rest of the evacuees were taken on 'Britannia' to Djibouti. The Royal Yacht then returned to the area and on the 19th January lifted off a further 209 people from an area 35 miles from the capital. Eighteen of them were British. These have since arrived in Djibouti, after transferring to HMS 'Jupiter'. I am now very pleased to be able to add that 'Britannia' has this morning picked up a further 15 British nationals from Little Aden. 'Britannia' is maintaining close contact with the vessels of the other nations involved and remains offshore nearby to take on board further parties of British and other foreign nationals as soon as conditions permit.
Click to expand...

Britannia was en route in advance of the Royal Visit to New Zealand and Australia (22 Feb - 13 Mar 86). It carried on. While the Royal Yacht had a detour for its bit of bother, the Queen might have wished for a slight detour during one day of the visit to NZ when she was attacked by egg throwing protestors and "mooned" by a grass skirt wearing Maori (such action apparently the greatest insult).

The commentary is a bit off, I don't think the RCN ever went to the pole even when the HMCS Labrador was in service? But some nice footage of the HDW. Yes Stoker, I made my obligatory comment about her armament, I like to be consistent.

Colin Parkinson said:
The commentary is a bit off, I don't think the RCN ever went to the pole even when the HMCS Labrador was in service? But some nice footage of the HDW. Yes Stoker, I made my obligatory comment about her armament, I like to be consistent.
Click to expand...

No the RCN has never made it the pole as of yet. The furthest North they have gone is 80 degrees in a Kingston Class.

Going by Wiki the furthest North the Labrador sailed in the RCN is Melville Island at 75 Degrees, which means the honour belongs to the Kingston's as you said, unless someone knows more about the Labrador voyages?

Colin Parkinson said:
Going by Wiki the furthest North the Labrador sailed in the RCN is Melville Island at 75 Degrees, which means the honour belongs to the Kingston's as you said, unless someone knows more about the Labrador voyages?
Click to expand...

It was already confirmed by DH. HMCS Shawinigan in Nares Strait Sept 8th 2014. 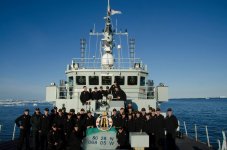 Furthest North I got was around 74 Degrees in Peel Sound, then we turned around and started making our way back to Pt Barrow before the ice got to thick.

Jarnhamar said:
That's an awesome-looking ship. I'd add another big gun to the rear of the ship, some gun placements (4) on the top of the bridge and top deck, and mortars. Because Ice Pirates.
Click to expand... 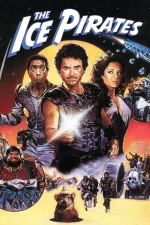 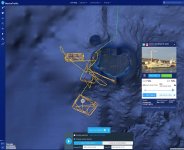 Like my wife looking for a mall parking spot at Christmas.

US Navy FONOP vs RuNavy in Sea of Japan