The Grey and Simcoe Foresters

From Army.ca Wiki
Jump to navigationJump to search

While many regiments of fusiliers, grenadiers and highlanders may be found in the armies of the Commonwealth, only two regiments of foresters exist - The Worcestershire and Sherwood Forestersof the British Army, and The Grey and Simcoe Foresters of the Canadian Army. The Canadian Foresters have had a unique history that has lived up to its rural versatility and spirit. The Foresters have enjoyed one of the most diverse roles in the Canadian Army, serving as infantry, armoured and artillery.

Foresters are a very old form of infantry finding its antecedents in Robin Hood’s Sherwood Forest. The Grey and Simcoe Foresters were formed from the 1936 amalgamation of the 31st Grey Regiment and the 35th Simcoe Foresters both originally gazetted on September 14, 1866. 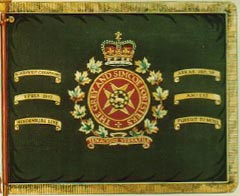 Regimental Colour of the Grey and Simcoe Foresters.

Receiving its first battle honour for Northwest Canada 1885, the Regiment's first call to action was years earlier during the Fenian Raids. Participating in the Boer War, The First World War (four battalions raised- 147th, 157th, 177th, and 248th), the Second World War (two battalions raised), the Foresters were unfortunately transferred or amalgamated during the conflicts as reinforcements, but this did not take away from a valiant war record.

At the battle of Paardeburg, Private James Findlay from the 35 Simcoe Foresters became one of the first Canadians killed-in-action. The Great War brought with it the creation of Camp Borden, where the Barrie and Collingwood companies of the 157th Simcoe Foresters were ordered to begin construction of the new camp. One 157th Simcoe Forester would later become the Premier of Ontario, the Honorable Leslie Frost of Orillia. In 1917, Private Tommy Holmes of the 147th Grey Battalion became Canada's youngest winner of the Victoria Cross, while assigned to the 4th Canadian Mounted Rifles. By the end of the war, the Grey and Simcoe counties had contributed over 6,000 soldiers, of whom several hundred were killed-in-action.

During the Second World War, the 1st Battalion became an armoured unit overseas, while the 2nd Battalion remained in Canada as an infantry unit. On January 26, 1942, the 1st Battalion became the 26th Army Tank Battalion (later Regiment), Royal Canadian Armoured Corps. They embarked for England on June 16, 1943 having served as local protection force in Ontario and Nova Scotia since mobilization. Unfortunately, the regiment had to swallow a bitter pill when on November 1, 1943 the regiment was broken up for reinforcements. Consequently, Foresters found themselves represented in tank regiments in almost every theatre of conflict.

Following the war the 2nd Battalion was converted to artillery becoming the 45th Anti-Tank Regiment on April 1, 1946 with the designation "(Self-Propelled)" being added on June 19, 1947. On October 1, 1954, the unit was amalgamated with the 55th Light Anti-Aircraft Regiment, RCA. The Foresters returned to the armoured corps on May 19, 1958, as the 28th Armoured Regiment.

Reverting to its original infantry role in 1970, the regiment was part of London District (now 33 Canadian Brigade Group) until transferring to 32 Canadian Brigade Group on June 19th 1995. In peacetime at home, the Foresters have responded to assistance to civil authority during Hurricane Hazel (1954), the Barrie Tornado (1985), the Manitoba Flood (1977) and the Ice Storm (1998), as well as to forest fires over the years. As well, many members have served as augmentation from the Korean War onwards, including the Middle East, Golan Heights, Cyprus, the Former Yugoslavia and currently in Afghanistan.

The Grey and Simcoe Foresters parade for a training night one night a week. As well as one weekend exercise a month(with the exception of the summer stand down from June-September.

Latley the Regiment has participated in Operation Nanook, a sovereignty operation to Baffin Island last August. As well as the up comming Polar Warrior which will be am exercise of the ARCG(Artic Response Company Group).

The Grey and Simcoe Foresters are the lead regiment in LFCA in the ARCG, with the Lorne Scots providing backfill for when they cannot fill the spots assigned to them. They primarily focus on operations in an artic and winter environment. Though they do still train to be capable in all the possible types of battle they may encounter.