What if....A Super disaster? Impact on Canada or the world? Napkin speculation

So some of my favorite hobby past times is learning about super or mega natural disasters. Its very humbling. And incredible what mother nature can do when she lays a smack down on man kind.

I am talking things like volcanoes, hurricanes, earthquakes, tsunami, etc. They impact society. Or many societies. And would most certainly affect military and emergency services.

So for fun, tell us a fictional story. What MEGA (not your everyday) disaster kicks the living hell out of Canada and/or the world. What sets up our man kind threatened disaster? and what happens next?

I'll go first. Apparently, Yellowstone (the park, not the awesome ranch) is on top of a very active but passive volcano that someday will erupt in a super volcano. So lets say its 2023 and that puppy finally lights up. Bad. Destroying pretty much the entire states of Wyoming and Montana. In Canada, southern Alberta, Saskatchewan and British Columbia are blanketed in thick ash clouds within days.

Crops are destroyed, planes are grounded, people are ordered to stay home. Emergency services are overwhelmed and the CAF is deployed but barely puts a dent in the disaster's effects. Livestock are dying, oil fields are eventually shutdown and even land transportation is almost completely stopped.

Several weeks later, the globe is covered in an ash sulfur cloud. The earth physically cools. Winter for us in Canada comes in 2-3 months early. Starvation skyrockets, hospitals are forced to brutally triage (turn away terminally ill and near death patients). Police and soldiers are stretched to their limits controlling exploitative actions such as looting.

From what I have read the eruptions of Tambora and Krakatoa in the 1800s affected the global weather patterns for 2 plus years. So in this case, I will assume its a full decade before the weather returns to somewhat normal and end result sees the world population reduced by 75%. How would politicians react? Who knows. Maybe Trudeau will be still be thankful for his carbon taxes.

How does your fictional story play out?

Honestly that's way too much of a disaster to really calculate. 75% of the global population is insane. Imagine all the worlds nuclear reactors just fail because there is no one to look after them. All the chemical plants rot and leak their toxins. You're talking a mass extinction event here.

Nice Armyrick, but your scenario has already been played: Go watch this movie: 2012 (film) - Wikipedia

Oldgateboatdriver said:
Nice Armyrick, but your scenario has already been played: Go watch this movie: 2012 (film) - Wikipedia
Click to expand...

I actually have not seen that one

Underway said:
Honestly that's way too much of a disaster to really calculate. 75% of the global population is insane. Imagine all the worlds nuclear reactors just fail because there is no one to look after them. All the chemical plants rot and leak their toxins. You're talking a mass extinction event here.
Click to expand...

Underway said:
Honestly that's way too much of a disaster to really calculate. 75% of the global population is insane. Imagine all the worlds nuclear reactors just fail because there is no one to look after them. All the chemical plants rot and leak their toxins. You're talking a mass extinction event here.
Click to expand...

Small scale but our current NBCD training looks at scenarios like this more than Nukes now. Big concern in some of our less, ummm "regulated" ports. 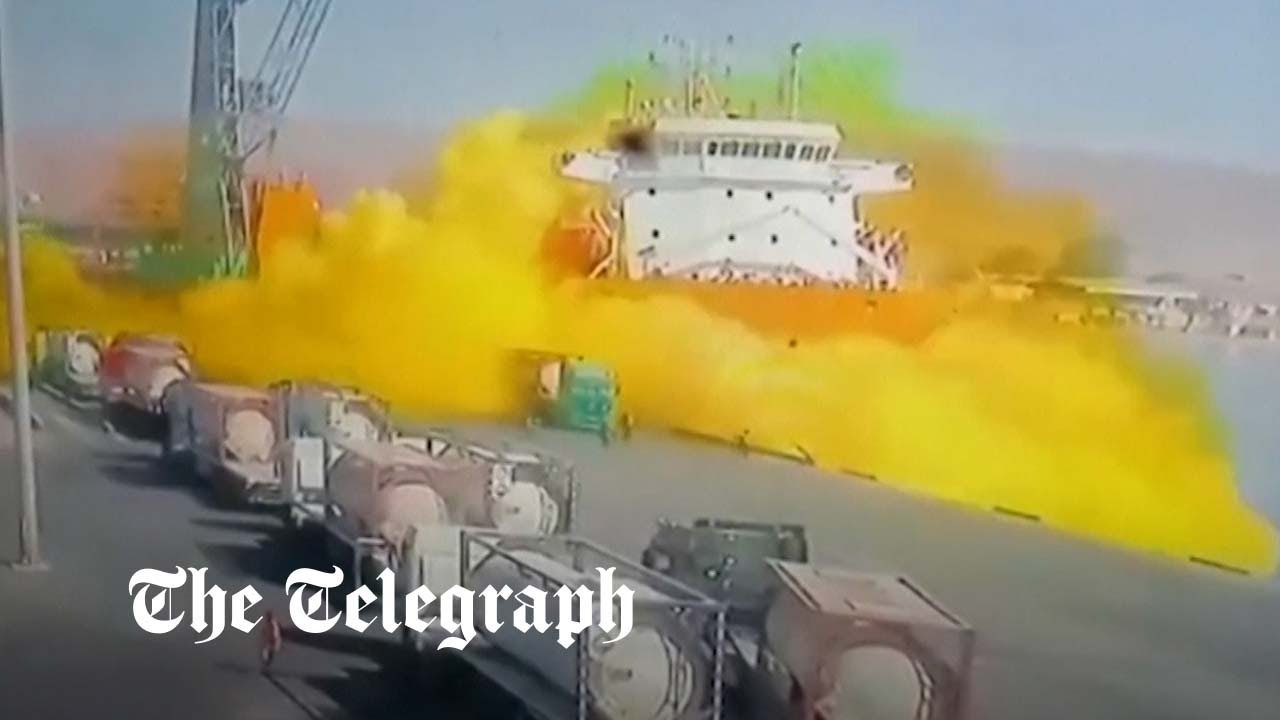 Force of the blast sent a truck rolling down the harbourside, while port workers were seen running for their lives

Keep in mind, the world population was 2 billion in 1939. After 6 years of war an estimated 40-50 million people were killed.

Something like a super volcano is on the level of a massive asteroid impact. So yes, 75% humans gone is very possible.
R

ArmyRick said:
Keep in mind, the world population was 2 billion in 1939. After 6 years of war an estimated 40-50 million people were killed.

Something like a super volcano is on the level of a massive asteroid impact. So yes, 75% humans gone is very possible.
Click to expand...

Here is a map showing the ash dispersal. As well as time of year. 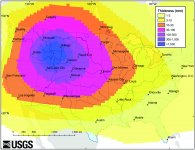 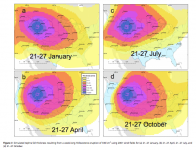 Remius said:
Here is a map showing the ash dispersal. As well as time of year.

So the entire food production area of North America is gone for a couple of years. I remember when Mt St Helen's blew. Our farm NW of Killarney MB was covered in a fairly substantial covering of ash a day or so after the eruption. Yellowstone, those that die on the day of will be the lucky ones.
R

With that modelling one can probably predict who would make it out in a timely manner.

So if we look at Canada we would have population movements to safe area in all directions via shortest route. Air evac is a non starter as nothing will be able to fly. CAF would have issues given the location of western forces so we can assume that maybe a third of our available resources would be hindered if not ineffective. We’d be recalling every asset we have whenever they are deployed in the world.

We’d likely have plenty of American refugees headed our way initially as some shorter routes to safety would be towards us. Everything up to the pink zone would likely be a write off and people would be on their on to try and get out. Orange zone would bear the hardest brunt of evacuated people, looting, etc.

Yellow zones would cope better but would eventually become destinations for displaced people.

I would see our military deployed initially to our orange zones but again, without air capability The ability to get to most of it (ie Calgary or Winnipeg). would be a challenge. Road move would be a chaotic with people heading away from those areas. Rail, maybe could be an option but I’m not sure what the status of rail would be.

End of current interglacial, although there's probably quite a bit of life left in this one.

Disasters are what they live for.

Remius said:
Here is a map showing the ash dispersal. As well as time of year.

I’ll be hoping for a April to July eruption, as October is a bad month for me.

It's all there in the tree-rings.

Upon examining the tree-ring record, Baillie noticed indications of severe environmental downturns around 2354 BC, 1628 BC, 1159 BC, 208 BC, and AD 540. The evidence suggests that these environmental downturns were wide-ranging catastrophic events; the AD 540 event in particular is attested in tree-ring chronologies from Siberia through Europe and North and South America. This event coincides with the second largest ammonium signal in the Greenland ice in the last two millennia, the largest being in AD 1014,
Click to expand...

The volcanic winter of 536 was the most severe and protracted episode of climatic cooling in the Northern Hemisphere in the last 2,000 years.[1] The volcanic winter was caused by an eruption, with several possible locations proposed in various continents. Most contemporary accounts of the volcanic winter are from authors in Constantinople, the capital of the Eastern Roman Empire, although the impact of the cooler temperatures extended beyond Europe. Modern scholarship has determined that in early 536 CE (or possibly late 535) the eruption ejected massive amounts of sulfate aerosols into the atmosphere, which reduced the solar radiation reaching the Earth's surface and cooled the atmosphere for several years. In March 536, Constantinople began experiencing darkened skies and cooler temperatures.

A smaller scale version was 1816 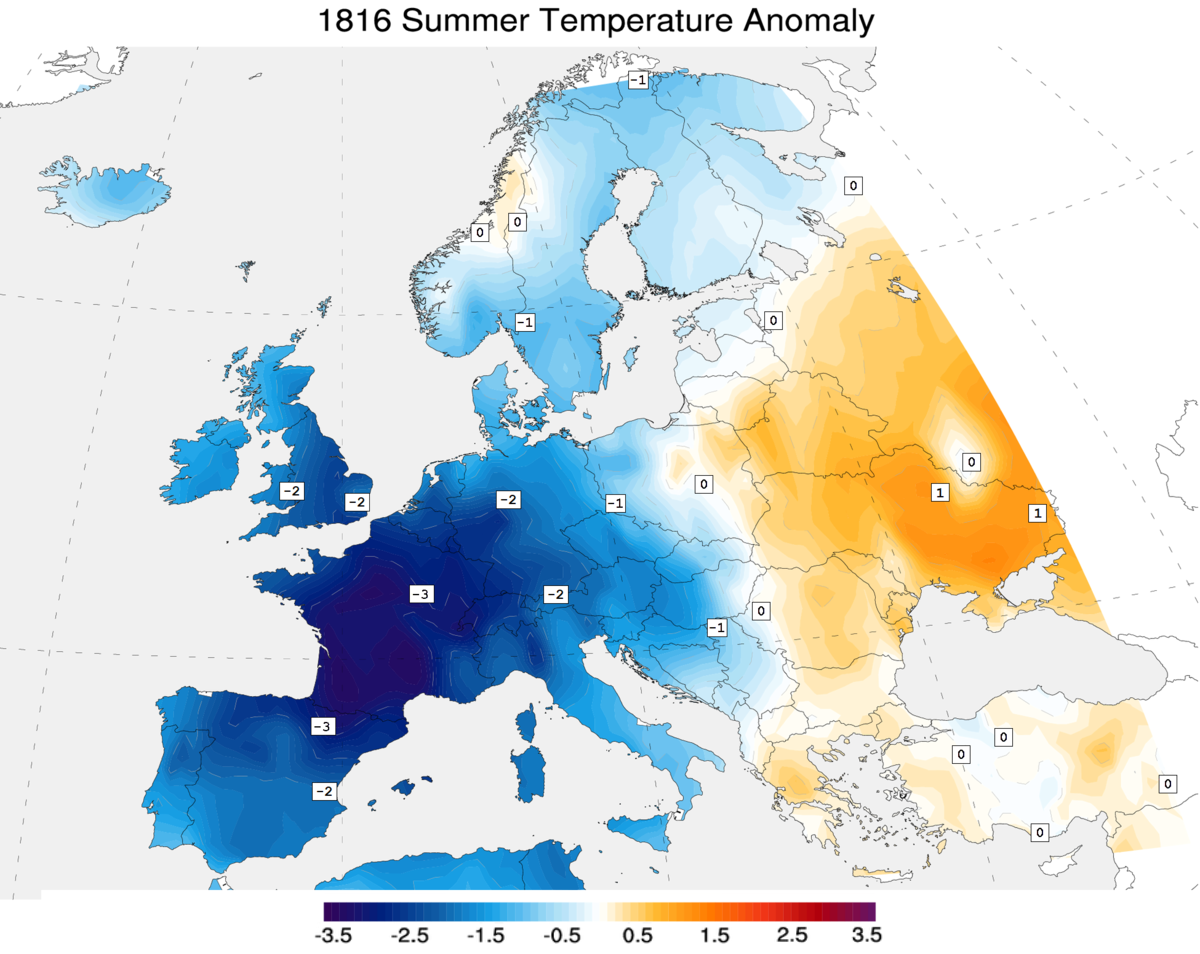 Year Without a Summer - Wikipedia

The year 1816 is known as the Year Without a Summer because of severe climate abnormalities that caused average global temperatures to decrease by 0.4–0.7 °C (0.7–1 °F).[1] Summer temperatures in Europe were the coldest on record between the years of 1766–2000.[2] This resulted in major food shortages across the Northern Hemisphere.[3]

Evidence suggests that the anomaly was predominantly a volcanic winter event caused by the massive 1815 eruption of Mount Tambora in April in the Dutch East Indies (known today as Indonesia). This eruption was the largest in at least 1,300 years (after the hypothesized eruption causing the volcanic winter of 536), and was perhaps exacerbated by the 1814 eruption of Mayon in the Philippines.
Click to expand...

Fiction has a long way to go before it beats the real thing.

mariomike said:
That is HUSAR's department.

Disasters are what they live for.
Click to expand...

Someone on here will know far more about this than I, but I recall talking with some emergency management folks on the Ministry of Health side about the earthquake risk on the West Coast.

A 7.0 quake striking close to downtown Vancouver, the most densely populated piece of Canada West of Toronto, would immediately result in over 6000 dead and times 10 wounded.

All the hospitals would collapse, of course, because they aren't earthquake proofed. All the bridges and other infrastructure would disintegrate. All the structures around the downtown area, nearest the water, would cave in as alot of them are built on shaky foundations and breeze blocks chucked in the west coast cedar swamp so they could build up neighbourhoods like Gastown and False Creek, which were originally temporary sawmill towns less than 100 years ago.

The Lower Mainland is the only major municipal region in Canada without co-located CAF resources. You know, the ones who do the heavy lifting in emergencies like this: the Army. Most reservists will be victims, as opposed to rescuers, of course. Vancouver airport, the only way to get aid/ CAF in, and casualties out, quickly will liquefy and burble into the salt chuck.

Because of the entitlement culture on the West Coast, no one has prepared themselves to survive for the mandatory minimum of two weeks without food, shelter, medicine, clothing etc.

Glass half full: the subsequent, gigantic, Tsunami would do a good job flushing the dead, wounded and debris out into Georgia Strait

There's a map in this article that shows the main areas that might be effected. I'm glad that I live on a rocky Island, far from there! 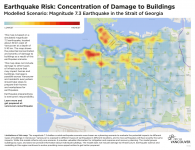 Oldgateboatdriver said:
Nice Armyrick, but your scenario has already been played: Go watch this movie: 2012 (film) - Wikipedia
Click to expand...

But would be better with this slight twist.

Sci Fi aside, a valid point brought up by DAB, many of the seismic events have knock on effects (Volcano or earthquake leads to tsunami, etc.)


How does your fictional story play out?
Click to expand...

Dancing in the streets because we don’t have Trudeau and Gerald Butts being all preachy about 2050 NetZero?
You must log in or register to reply here.