Further to my previous post post(http://www.theglobeandmail.com/blogs/spector-vision/obama-calling/article1237406/), U.S. pressure on Canada to re-visit the decision to end our mission in Afghanistan can be expected to increase in light of the line story in this morning’s Le Devoir(http://www.ledevoir.com/2009/08/01/261300.html).

In an interview with reporter Alec Castonguay, Brigadier-General Jonathan Vance, the commander of Canadian forces in Afghanistan, is quoted as follows:

“There’s no way that Afghan forces will be able to assume responsibility for security in Kandahar in 2011. It’s absolutely impossible. …The decision to withdraw Canadian troops in 2011 was a political decision. As we leave, we will have to be replaced by another NATO country in Kandahar.”

In explaining the failure of our forces to achieve the objective set by the Conservative government in the 2007 Throne Speech and to meet the deadline set by Parliament, Brigadier-General Vance went on to say:

“In an insurrection, you need a strong security presence to protect the people. From the beginning of our mission in Kandahar in 2006, we never had sufficient military resources to make progress. We only had enough soldiers to contain the insurgency and to begin a slow improvement of the Afghan National Army.”

To echo Brigadier-General Vance's statement, any no-hook private who's stepped outside the wire in Kandahar could tell you "we never had sufficient military resources to make progress. We only had enough soldiers to contain the insurgency and to begin a slow improvement of the Afghan National Army."
It was glaringly obvious during my first tour in 2006, and again late 2008.
Good on Brigadier-General Vance for stating the truth.

Oops, there goes another smart general who cited common sense and spoke the truth.  {tongue in cheek}
I don't think we'll be out of there until 2020!  The Russians tried for 10 years to qualm the Mujehedeen (sp.) and ultimately failed and went home with their tails between their legs.  Now, in steps NATO and tries to do it with half the forces in less time against the very people they wanted there in in the first place, who are now the enemy because NATO countries don't like the way they went back to basics.

Unfortunately, a few more NATO soldiers are going to pay the ultimate price for someone else's freedom.

Another one who has a strong line of soldiers behind him, like Gen. Rick Hillier.

There’s a fellow with a very nice office on Pennsylvania Ave in Washington, DC, a fellow named Wilson, who has been to see Secretary Gates about extending our stay in Afghanistan.

We can imagine what he said:


“Bob, the Government of Canada is quite willing to consider an extension of the mission but it’s not a government decision. Parliament has made this decision and, as things stand, the government does not have the votes to change Parliament’s decision. You need to lobby Mr. Ignatieff and his colleagues in the Liberal Party of Canada; if they want the mission extended then the current government party will join with them to make that decision. If they will not reconsider their position – which is to leave in 2011 – then there is nothing that the Government of Canada can do except to obey the will of Parliament, as it must in our system of democracy.”


The decision to leave or stay rests with Michael Ignatieff, not Stephen Harper. Harper has a parliamentary “decision” and a whole hockey sock full of polls telling him to quit, to “cut and run,” as it were. If that decision is going to be changed then public opinion must change enough to change Ignatieff’s mind.

Remember Ralph Klein’s old maxim: Politicians wait until they are sure which way the mob is going, then they rush out front to lead it there.

How about a couple of "what ifs"?

1)  What would happen if Secretary Gates said, "Well, could you, say, move your troops out of Kandahar to someplace else in Afghanistan, letting us shift troops into the south"?  The words of the Motion commit Canada to get out of Kandahar by the end of 2011, not Afghanistan.  What the politicians say about the Motion, well, that's what makes the discussion intriguing, no?  ;D

notwithstanding Harper's political capital, any ideas specifically how Obama would have to spend his political capital in a way to (maybe) get Canada onside?  Softwood comes to mind for me, but I'm parochial, coming from a part of the world where forestry is dying.

BYT Driver said:
The Russians tried for 10 years to qualm the Mujehedeen (sp.) and ultimately failed and went home with their tails between their legs.  Now, in steps NATO and tries to do it with half the forces in less time against the very people they wanted there in in the first place, who are now the enemy because NATO countries don't like the way they went back to basics.
Click to expand...

Do not equate what we are doing with what the Soviets tried to do.  For starters, throughout their entire affair, the 40th Army was the only army used in Afghanistan.  (Incidentally, does its HQ look familiar? : 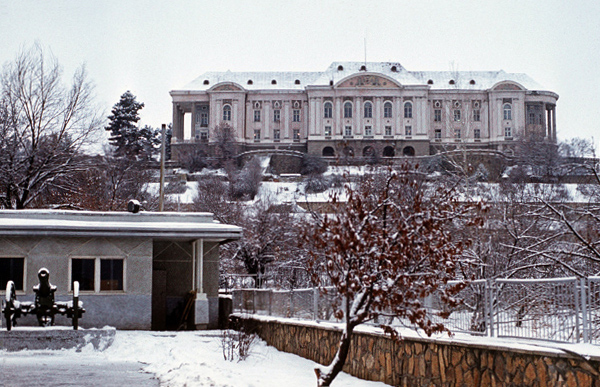 In the German Democratic Republic alone, there were six armies (1st Guards Tank, 2nd Guards Tank, 3rd Shock, 8th Guards, 20th Guards and 28th).  There were two more in the CSSR, a tank army in Poland, and so forth.  The main effort for the Soviets was Europe: full stop.  Afghanistan was a side show for them.  It did not force the end of the cold war (as some would posit), but rather the cold war was so expensive, it forced the Soviets to abandon efforts in Afghanistan.
Second, the Soviets were up against pretty well everyone in Afghanistan.  And those "everyone" were supplied by the US.  Everything from Stinger missiles to whatever else they could get in there.
NATO has a few shows on the go right now: the Balkans and Afghanistan are the main two.  We aren't fighting "everyone", but essentially a group of Pashtuns.  We are there because the Mujahadeen (sp?) were defeated by the Pashtuns, and those Pashtuns allowed such gentlemen as Osama bin Laden to set up camp in town.  Fast forward to 9-11, then beyond, and here we are.

So, the false association/comparison with the Soviet Afghan war are errroneous at best.

Sorry, my history is horrible.  I speak of the Russians because they failed to take over.  Yes, they were trying to take over the world...and now they're hauling stuff for us...the world is strange.  We are trying to help these people and the Taliban don't like that. Maybe I should just go back to school and get my head out of me arse ans stop commenting on stuff I really don't know much about.

sorry attachment in regards to my post
scoty b

We need more soldiers on the ground.
Not soldiers from countries who don't let their troops outside of the wire who sit around and eat all day either.
You must log in or register to reply here.

NATO nations being asked to send troops back to Afghanistan.