One Canadian soldier has been killed and three injured after an improvised explosive device detonated near their armoured vehicle in Afghanistan's Shah Wali Kowt district.

The three injured soldiers are members of the same battle group. They were evacuated by helicopter to the hospital at Kandahar Air Field and are reported to be in good condition.

The soldiers were "participating in an ongoing operation when the incident occurred" around 8 a.m. local time, approximately 35 kilometres north of Kandahar City, according to a statement issued by Col. Jamie Cade, acting commander of Task Force Kandahar.

In his statement, Cade described Good as "an easygoing individual who would do anything for anyone. He was active in his community and the best neighbour you could ask for. He had a distinctive laugh, a smile that reached from ear to ear."

Cade said Good was devoted to his wife, Sandra, and two daughters, of whom he spoke often.

"We are truly saddened by the death of Trooper Good, and his friends and family are in our thoughts and prayers," Cade said.

The fatality brings Canada's troop death toll in Afghanistan to 107 since the mission began in 2002.

OTTAWA – One Canadian soldier was killed and three others were injured when their armoured vehicle struck an improvised explosive device approximately 35 kilometres north of Kandahar City in the Shah Wali Kowt District.  The incident occurred at approximately 8:00 a.m., Kandahar time, on January 7, 2009.

The injured soldiers were evacuated by helicopter to the Multinational Medical Unit at Kandahar Airfield. All three soldiers are reported to be in good condition.  Their names will not be released.

The thoughts and prayers of every member of Joint Task Force Afghanistan are with Trooper Good’s family and friends during this very difficult time. Despite our grief, we will continue our mission to help the Afghan government and the Afghan national security forces bring security and stability to their people.

Afghan national security forces and Joint Task Force Afghanistan continue to work together to protect the population in Kandahar Province, and remain committed to improving the security situation in order facilitate reconstruction and development in the region.

A photograph of Trooper Brian Richard Good is available on the Combat Camera website (search under last name) at: www.combatcamera.forces.gc.ca

Condolences to the family, colleagues and friends of the fallen, and hopes for a speedy recovery for the wounded.

My sympathies to the loves ones, family, friends, comrades and RCD Regimental Family.

Rest in peace Trooper,but the fight goes on. With those who carry your memory, may I offer my deepest condolences. To the wounded, get well soon, we still need you. Ubique. 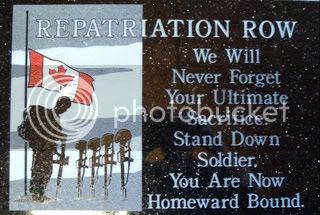 RIP.....and condolences to all this brave soldier's friends, family and loved ones.

Statement
Statement by the Minister of National Defence on the Deaths of Trooper Brian Richard Good
NR–09.002 - January 7, 2009

OTTAWA – The Honourable Peter Gordon MacKay, Minister of National Defence and Minister for the Atlantic Gateway, issued the following statement today on the death of a Canadian soldier in Afghanistan:

“I would like to offer my most sincere condolences to the family, friends and colleagues of Trooper Brian Richard Good, who died today in Afghanistan when the armoured vehicle he was travelling in struck an improvised explosive device north of Kandahar City. Our thoughts and prayers are with them during this time of loss.

I would also like to wish a speedy recovery to the three Canadian soldiers injured in the same incident. Our thoughts are very much with you during this difficult time.

Despite our grief, we will continue to contribute to the United Nations-mandated, NATO-led mission to bring peace and stability to the people of Afghanistan. Whether improving the security situation in order to set the conditions for reconstruction and development, or providing humanitarian assistance, the Canadian Forces are making a considerable difference in a country that has seen decades of war. Rest assured that Trooper Good’s sacrifice was not made in vain.

Trooper Good served his country proudly. He will not be forgotten.

Message from Her Excellency the Right Honourable Michaëlle Jean, Governor General and Commander-in-Chief of Canada, on the death of Trooper Brian Richard Good
January 7, 2009

OTTAWA—We have once again received terrible news from Afghanistan, having just learned that Trooper Brian Richard Good was killed and three others were injured when an improvised explosive device detonated in the Shah Wali Kowt District. A member of The Royal Canadian Dragoons, Trooper Brian Richard Good was serving with the 3rd Battalion, The Royal Canadian Regiment Battle Group. The relentless violence with which our troops are confronted in Afghanistan continues on a daily basis.

My husband, Jean-Daniel Lafond, joins me in extending our sincerest condolences on behalf of all Canadians to the family, loved ones, friends and comrades in arms who are mourning the loss of this courageous soldier, a generous man who was driven by his desire to help a population in danger and by his sense of duty. Our thoughts also go out to the wounded, to whom we wish a full recovery, and to their families who are also grappling with this tragedy.

I have the utmost respect for all members of the Canadian Forces, who are risking their lives to ensure the success of this very difficult mission in Afghanistan, the purpose of which is to secure and rebuild a country that has been ravaged by so much hardship, misery and inhumanity.

Prime Minister Stephen Harper issued the following statement today on the death of a Canadian soldier in Afghanistan:

"I was very saddened to hear the loss of a Canadian soldier today. On behalf Canadians and of the Government of Canada, I would like to offer my sympathies to the family, friends and loved ones of Trooper Brian Richard Good who died while serving in Afghanistan. Our thoughts and prayers are with them during this difficult time.

"Trooper Good was killed and three other Canadian soldiers injured when their armoured vehicle struck an improvised explosive device north of Kandahar City in the Shah Wali Kowt District.

"I would like to wish a quick recovery to our injured soldiers. Our thoughts are also with them.

"Canadians, and the Government of Canada stand proudly in support of our Canadian Forces members as they strive to bring safety and stability back to Afghanistan. While the task is not easy, Canada – along with our NATO and international allies - will continue our efforts to secure and rebuild this war torn country.

"Trooper Good's sacrifice will not be forgotten."

At ease trooper Good, your work is done.

My condolences to the family, friends and comrades of the Trooper... and for the injured, get well soon - we nee you.

at tht goind down of the sun,
and in the morn,
we will remember them!

My condolences to Trooper Good's family and the Royal Canadian Dragoons.

RIP trooper, my thought are with is family, friends and the regimental family,


Adsum my friend
You must log in or register to reply here.