I wonder if this ship will be completed before both of the RN's new CVFs slated to be built?

Northrop Grumman Shipbuilding and the U.S. Navy marked the keel-laying of the newest aircraft carrier Nov. 14 in ceremonies at Newport News, Va.

The ship is named after Gerald R. Ford, the 38th U.S. president. Ford's daughter, Susan Ford Bales, is the ship's sponsor and authenticated the keel when her initials were welded onto a metal plate.

The carrier, numbered CVN 78, represents the first new U.S. carrier design since the 1960s. The ship will have a smaller crew than previous flattops and incorporate new technologies, including an Electro-Magnetic Aircraft Launching System, advanced arresting gear and dual-band radar.

Nice to see the name coming back.

Next carrier to be named for President Kennedy
Staff report
Posted : Sunday May 29, 2011 13:55:49 EDT
BOSTON — Navy Secretary Ray Mabus announced Sunday the next Gerald R. Ford-class aircraft carrier will be named in honor of President Kennedy.

The selection, designated CVN 79, pays tribute to his service in the Navy, in the government and to the nation.

“President John F. Kennedy exemplified the meaning of service, not just to country, but service to all humanity,” Mabus said in a Navy news release. “I am honored to have the opportunity to name the next aircraft carrier after this great sailor and inspirational leader, and to keep the rich tradition and history of USS John F. Kennedy sailing in the U.S. Fleet.”

During World War II, Kennedy took command of PT 109 at Tulagi Island in the Solomons, with a mission to intercept Japanese ships attempting to resupply their barges in New Georgia. On the morning of Aug. 2, 1943, Kennedy’s ship was struck by an enemy ship and split in half. Over the next six days, Kennedy led his crew members to safety and an eventual rescue. Kennedy received the Navy and Marine Corps Medal for the rescue of his crew and a Purple Heart for injuries he sustained when his ship was struck.

After his military service, Kennedy became a congressman representing the Boston area, was elected to the Senate in 1953 and in 1961 became the youngest person to be elected president.

One previous aircraft carrier, CV 67, was named in Kennedy’s honor. It was decommissioned in 2007 after nearly 40 years of service, including Operation Desert Storm.

The ship will be constructed at Newport News Shipbuilding, Va.
C

An update of the ship's construction so far:

USS GERALD R. FORD: Check Out The Construction Of The Most Expensive Ship Ever 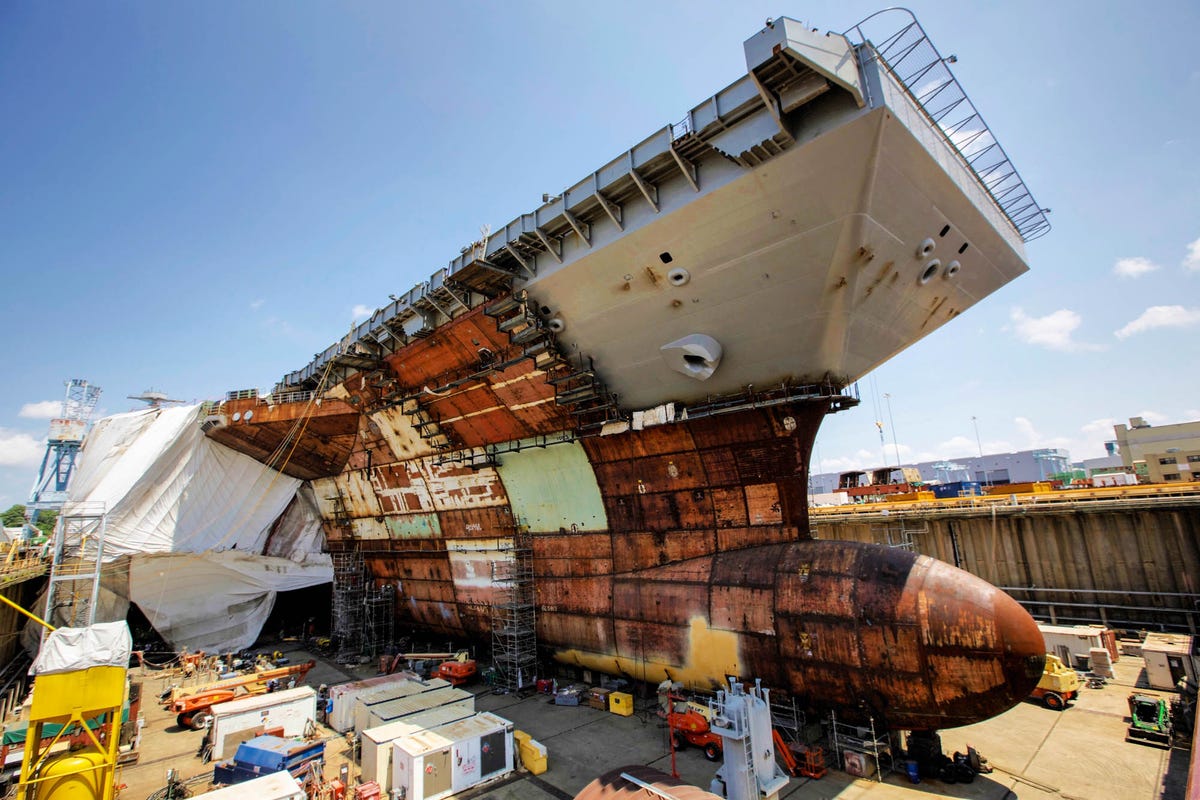 Plus info on the other ships of the class:

Current Named Ships of the Gerald Ford class are:

The Ford's hull meets water for the first time...

It was a rainy Oct. 11 at Newport News Shipbuilding in Newport News, Va., but spirits remained high as the future USS GERALD R. FORD (CVN 78) was floated for the very first time. Four years after construction began in a huge graving dock, ship’s sponsor Susan Ford Bales, daughter of the late president,  pushed a series of buttons to start the flow of more than 100 million gallons of water into the dry dock.

The flooding of the dock takes place in phases during which various tests are conducted. Initially, the dock is flooded about 4 feet high to its keel blocks, wood-capped concrete pads on which the ship has been supported during construction. Once the dock is fully flooded and initial afloat testing is complete, water will be partially pumped out and the ship returned to her keel blocks in anticipation of the ship’s christening on Nov. 9. The FORD will float again about a week later when it will be moved to a pier for outfitting.

(More pics and text at the link)

Beautiful lines on her hull
C

The USS Gerald R. Ford, the nation's first Ford Class aircraft carrier, is readying for christening on Nov. 9 and a rigorous set of tests and evaluations after that.

The 77-ton, next-generation carrier is slated for 27 months of assessments before it's commissioned for service in 2016, service officials said.  "This is going to the most challenging and integrated test program the Navy has ever faced," said Rear Adm. Tom Moore, Program Executive Officer, Carriers. "Ford has a level of integration that no other ship has ever had. Because the ship is all electric, almost every system on that ship is integrated in some way."

I think somebody goofed: The ORCA's are more than 77 tons.

Oldgateboatdriver said:
I think somebody goofed: The ORCA's are more than 77 tons.

Hell, the crew alone would be in the range of 375 tons.

77 meters is the flight deck length beam according to Wikipedia ...

Again, that must be a typo: I would hope that 77 meters would be the flight deck's width, not length, which should be closer to 315 meters.

I'll own the flight deck length vs beam typo ...

Curious to know how the sensitive electronics both onboard and enplane are going to be protected from the magnetic waves rolling across the flight deck but I'm not expecting any kind of a detailed answer other than "shielding".
D

cupper said:
Hell, the crew alone would be in the range of 375 tons.

tomahawk6 said:
The Ford will be the first carrier to not use steam for the catapults,rather the catapults will be driven by electricity. Four linear motors will create magnetic waves that propel the catapult.
Click to expand...

I wonder if the designers ever watched "The Philadelphia Experiment"  ;D

dapaterson said:
I'd be hard pressed to find many sailors at or below 175 lbs...
Click to expand...

Especially in the US Navy. :nod:

dapaterson said:
I'd be hard pressed to find many sailors at or below 175 lbs...
Click to expand...

The US Navy has christened the first of its new Ford-class of nuclear-powered aircraft carriers.

The new super-carrier, which is only 70% complete, is named after late US President Gerald Ford.
It is the first of 10 carriers designed to get more fighter planes into the sky more quickly, but
with 1,000 fewer crew members. The USS Gerald R Ford is reportedly about 22% over budget,
at a cost of almost $13bn (£8.1bn, 9.7bn euros). It comes at a time of growing budget
pressures for the US.

The carrier, which will weigh 100,000 tonnes, is reportedly due to be finished in 2016 when
sea trials are likely to begin.

'Courage'
The ship is said to be the most technologically advanced aircraft carrier the US has built.
"She is truly a technological marvel," Chief of Naval Operations Adm Jonathan Greenert
said. Mr Ford's daughter, Susan Ford Bales, smashed the traditional bottle of champagne
into the ship at a ceremony in Virginia on Saturday. Former US Vice-President Dick Cheney
and former Defence Secretary Donald Rumsfeld were among those leading tributes to the
38th US president.

"He was a man of courage and solid values... and I know the men and women who sail
this ship will bring those same qualities in their service to our nation," Mr Rumsfeld told
the audience.

Delays with the ship's completion mean the US Navy will be reduced to a 10-carrier fleet,
following the USS Enterprise's deactivation last year. Fewer crew members mean the
Ford-class carrier is expected to save $4bn (£2.5bn, 3bn euros) over the ship's 50-year
life span, according to the ship's website.


It is designed to increase its ability to launch fighter jets and helicopters by 25%,
generate more electrical power and allow the use of unmanned drones.

Mr Ford, who took office after Richard Nixon quit over the Watergate scandal in 1974,
died in December 2006 at the age of 93.
C


When the next-generation aircraft carrier CVN 78 Gerald R. Ford takes to the seas later this decade, it will face one of the most dangerous threats to the U.S. maritime military behemoth - the Chinese DF-21 anti-ship ballistic missile (ASBM).

But U.S. Navy officials remain confident that the technological improvements to the Ford as well as the other ships shielding the carrier from attack should be able to protect the vessel.

But zeroing in on a carrier with such a missile is more difficult than it seems, says Rear Adm. Michael Manazir, director of air warfare.


"People think this is a big target. But they have to get to the carrier and then discern that it is a carrier. It's a series of systems. We want to attack it on the left side of the kill chain. The ship will have the kind of electrical power margins to make it possible to incorporate lasers or other energy weapons aboard the vessels. The Ford's electric power distribution grid kicks up about 13,800 volts. The Ford was designed with a 60 percent increase in capacity."

The ship also will be sporting the Navy's new dual-band radar (DBR), another major technology improvement for the Ford-class carrier that should help provide missile defense.

Similar to the shock tests in the picture at the link below:

By Christopher P. Cavas4:43 p.m. EDT August 11, 2015
WASHINGTON — The Pentagon rejected a US Navy plan to carry out shock and survivability tests on the second ship of its new aircraft carrier design, and instead directed the service to test the first ship — even though doing so may delay the ship's first deployment by at least half a year.

In an Aug. 7 memo to Navy Secretary Ray Mabus, Frank Kendall, the Pentagon's top acquisition official, ordered the "full ship shock trial" (FSST) to be carried out on the Gerald R. Ford (CVN 78), first of a new class of carriers and expected to enter service in 2016.

The ship is in the final stages of construction at Newport News Shipbuilding in Virginia.

Plus a belated update from last year:

The U.S. Navy's newest aircraft carrier — a massive warship outfitted with the latest radar technology and sophisticated systems to accommodate unmanned, carrier-launched drones — is set to undergo more than two years of rigorous testing.
<snipped>
The USS Ford was christened during a special ceremony in November in Newport News, Va. The massive warship is slated to officially enter service in the Navy in 2016. But first, shipbuilders will spend 26 months meticulously testing the aircraft carrier's various systems.
Click to expand... 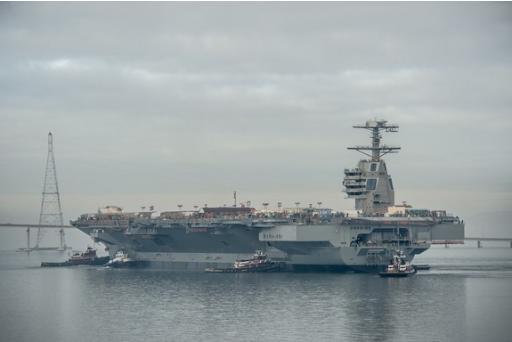 Photo by Chris Oxley/Newport News Shipbuilding
You must log in or register to reply here.