I've been told we're straying into OPSEC here, so please try to keep the discussion away from specific weapon capabilities or limitations.

Right, because we always get what we pay for. :
P

In this case we did get what we paid for.
A prototype that many other NATO countries are still behind the 8 ball on; one of our fellows just returning from the UK equipment course got  to put some pointy heads at Larkhill in their place who didn't even know that it is in service now.
And it works, and with a Canadian designed system; accomplished in a bit more than a year.

Excalibur round debuts in Afghanistan
Written by Army Sgt. Henry Selzer 173rd Airborne Brigade Combat Team Public Affairs
Monday, 10 March 2008
KUNAR PROVINCE, Afghanistan –Soldiers of Charlie Battery, 3rd Battalion, 321st Field Artillery Regiment, fired the first 155mm GPS-guided Excalibur artillery round in Afghanistan Feb. 25.
The GPS-guided Excalibur round was given the proper grid coordinate to seek out and destroy a target using the Enhanced Portable Inductive Artillery Fuse Setter by placing the system on the tip of the round and sending a digital message containing the coordinate for the round to find.
“The Excalibur round travels farther and is designed to hit targets that conventional ammo does not always hit,” said Army Staff Sgt. Darius Scott, 36, of Sumter, S.C., deployed with C Battery, 3-321st FAR.
The Excalibur was fired using the M777A2 155MM howitzer.  The M777 is designed to be a completely digitally programmed weapon and is about 9,800 pounds lighter than the more commonly used M198 Howitzer and is more accurate.
“The main purpose of the M777A2 is that it is more able to help the units in the Korengal Valley by providing more timely and accurate fire,” said Army Capt. Ryan Berdiner, 28, of Landsville, Pa., commander of C Battery, 3rd Bn., 321st FAR.
“By using the Excalibur, we are mitigating a lot of collateral damage that other rounds may cause,” said Scott.
The test fire was deemed to be a success when word came back from the impact area that the Excalibur successfully completed its mission by finding and destroying the target at the provided grid coordinate.

The excalibur sounds like it's a good piece of kit, but just remember Artillery is a area weapon.
P

A close up shot. 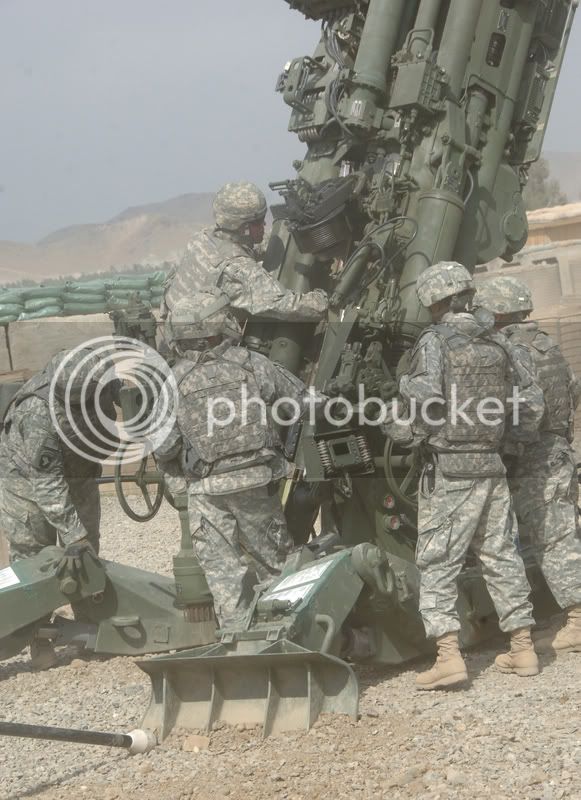 OTTAWA — Canadian army gunners in Afghanistan are now cleared to fire GPS-guided artillery shells at Taliban militants - at the cost of $150,000 a round.

The Excalibur shell could very well be the most expensive conventional ammunition ever fired by the military.

Supporters argue that the weapon, which has the ability to correct itself in flight, has pinpoint accuracy. They predict that will cut down on the mounting civilian death toll from air strikes in a war-torn region, where insurgents often hide among the population.

"It lands exactly where you want it to land," said Lt.-Col. Jim Willis, a senior officer in charge of acquiring the munitions.

About 18 months ago, the army announced its intention to buy a handful of the experimental shells to go along with its brand new 155-millimetre M-777 howitzers.

Introducing the weapon to the army's arsenal has been slower than expected because of concerns related to the shell's performance in cold weather and precautions to make sure the GPS signals can't be jammed or scrambled by insurgents.

Willis said battery guns supporting Canada's battle group in Kandahar recently test fired the shell in the desert and the new weapon performed flawlessly. He wouldn't say how many shells were fired.

A U.S. army unit in eastern Afghanistan conducted its own tests late last month and has also cleared the Excalibur for action.
More on link
E

Oh yes it can be right! The Excalibur has a hardened GPS system in the nose. Imagine the development costs for that program and then do the math.

Originally the expected cost per shell was budgeted at $80,000 but during testing it was discovered that cold weather caused the internal battery to malfunction(loose power).
It was anticipated that when production started the cost per shell would lower the cost to $40,000 per shell.

If $150,000 is the production cost than some major improvements were made in the shell. We are fortunite our dollar is so high or the cost would be prohibitive.

I seen it on CBC news world this morning; they used as a way to bash the CF  :.  along the lines of look how the CF is wasting tax dollars.  They played down what it was, and tried to pass it off as a regular arty shell  :

who cares about the cash! FIRE MISSION!

lets give the soldiers doing the business the right tools!

The MsM and naysayers will consider any improvement in capacity by the CF in a negative light....

I think Excalibur is necessary, and I'm sure the CF won't be using them unless they are needed (the military is concerned with cost just as much as the taxpayer). But I also don't think the CBC is doing a bad job of reporting this. The story on the website featured proponents of Excalibur as well as nay-sayers. We can't attack the CBC every time it's critical of the CF. I think the last few years have seen the CBC feature some very "pro CF" material. We've seen a special on CF snipers (CBC Sunday Night I think), Mansbridge did that week reporting from various CF bases, and then there's Don Cherry, and who can argue that he's not the most ardent supporter of the CF on TV in general? We have to stop being so sensitive and accept the fact that we live in free country, with an active media that sometimes gets it right, and sometimes gets it wrong.
P

GUNS said:
Originally the expected cost per shell was budgeted at $80,000 but during testing it was discovered that cold weather caused the internal battery to malfunction(loose power).

If $150,000 is the production cost than some major improvements were made in the shell. We are fortunite our dollar is so high or the cost would be prohibitive.
Click to expand...

the $150K price is higher than any values I've seen associated with it, even in 2005 dollars, I'm not sure where that value is coming from.
As for the high cost, this is not because the battery malfunctioned or lost power in the cold (which it didn't, it needs a bit more time to become active) or because they had a product at price X then decided to rejig it and sell it >priceX; it is mainly because it is still a developing technology, and no one else is anywhere near achieving the level of functionality Excalibur already has, the main one: mitigating collateral damage risk significantly and still giving the supported arm the effects needed on the target. To achieve something as technically challenging as that, when no one else has "found the Cadburry secret", is going to cost high $ in R & D costs.
I recently toured the plant where these projectiles are made, I would say there are a lot of indicators the next batch will most likely be a lot cheaper.

The initial technology of anything is always extremely more expensive. From civilian to military, it doesn't matter, because private industry is usually behind the creation of said tech. 2nd, 3rd, 4th, etc generation always gets cheaper.

If it can be pinpointed on some douchebag terrorists camp and keep even 1 civvie alive my tax dollars are working well.

friendly fire is no joke either and if these shells give troops on the ground a little more piece of mind, I'd say my taxes are being used right

If the cost for firing an Excalibur is a concern, we won't even start to mention how much it costs to fire some of the Naval weapons.  If the use of these weapons gets the job done, makes it safer for those on the ground and further reduces civilian casualties, I have no problem with the use of them. You can't fight a battle on a budget.
You must log in or register to reply here.

New 120mm Bullet for the Leopards?