Soldier: I want A

DLR: sorry we don't have A in your size

Soldier: okay what can I have?

DLR: take C no one else wanted it.

Soldier wear C for two months, just has it broken in as the first 3 week he took trying to get his CSM/RSM to lket him wear them, as they where different and there was no message attached to the boots authorizing them for wear.

DLR: great what do you think of the boots.

Soldier: Well I have only worn them a few times, never been on ex, or rucked with them.

DLR: we dont care - what do you think of them

Somewhat facetious stab at the trial method but in all reality, unless soldiers get multiple pieces of gear, they cannot offer a true opinion on how something compares.

Feet are very individual - I had a boot chit since 1995, when I got back in 2002, the system had changed, and they had no boots, so I just wore what I wanted, and only a few times did an RSM ever bother to ask me why.

Quite honestly the boot is the ONE thing that soldier should get some leeway on.  Its not like its the end of the world is Pte Bloggins has a slightly different boot than Cpl What'shisnose, or Capt Clownshoes.  The end of the day is the mission getting accomplished?

From where I sit the CF could save a metric shit ton of money in a $200/year boot allowance.  And also admit that if an individual boot is destroyed by a service related incident that the soldier turns that boot in for another allowance that year.
(I had a set of LPO Danners ruined in Bridgeport CA in Mountain Training, and was just out a pair of Danner -- good job system).

Worried about boots for deployed troops - fix the MAIL, and/or just mandate another set to be brought.

Ahh boots money; save some now and pay lots later in some cases.

Foot clinic staff all pretty much agreed that the culprit was the crappy insoles/liners.  Since then I've been in orthotics and LPO boots.

Doing some rough math, replacing the orthotics every 2 years, my LPO Temp cbt boots every 3 years and my LPO CWWB every 6 years, the CF is forking out about $16-$17k between '03 and my CRA date.

For whatever reason, when I go to the physio folks for my assessment/new orthotics every 2 years its not big deal ($300/pr x 2 sets).  Trying to get LPO boots that fit "my feet" (foot + orthotics IAW the med and physio folks) was one fucked-up exercise in retaining my sanity.

And all because of those shitty insoles/liners....I don't know what is more painful at this point, not wearing orthotics or the LPO Boot Square Dance/Gong Show every few years... :

Why I have to go back to physio every time I need new boots for them to confirm my arches have not "UNfallen" is beyond me...then there is the haggling over what place I get to go to, and if they actually have boots that meet the RCAF boots specs... :Tin-Foil-Hat:

That Liner/Insole is/was a disaster.

I've not been in since 2005, but the on the bus, off the bus routine with the boot fiasco is an utter cluster.

I still blame the "Cornwallis Crippler" runners that I was originally forced to wear (1987) for the foot problems that plague me to this date.

So- I was issued two sets of these brown boots yesterday. They aren't uncomfortable at the moment but they dont seem to be durable. Im concerned about doing anything in them and then having to make them presentable.

container, there comfortable, and there is a bit more ankle flexibility, but be prepared to see scuffs. for parade I use daubin polish, its clear and makes them sparkle, Coc knows there isn't anything you can do about the scuffs so don't baby them in a sense.
I've noticed shin strain if the top lace isn't completely tight, just passing it down.
M


From the original document

3.3.5 Design. The overall design of the LOTB should be heavily influenced by current
commercial-off-the shelf (COTS) ruggedized, outdoor footwear.
Click to expand...

4.1 Whole Boot - Weight. The overall weight for the boot, excluding the removable inserts and
the laces, must not exceed the maximum average weight of 900.0 grams per boot.
Click to expand...

The current timeline is ambitious and envisions completing user trials in late autumn 2013. A contract could then be
awarded to deliver boots into operational service in spring and summer 2014.
Click to expand...

Question 15: Commercial Brown
Annex B page 5/18
3.3.3 Colour. The colour requirements for the LOTB (upper material(s), outsole and midsole (if
utilized), lining, removable inserts, and fittings (lacing system, laces, etc.)) must be a commercial
brown. The shade and pattern is left at the discretion of the bidders. The LOTB must be made
with a matte finish to decrease the ease of visual detection. Colours must remain consistent
before and after any manufacturing process.
At the Industry Day held on December 12, 2012, “Commercial Brown” was defined in the
questions period from “tan” or “beige” to “dark brown”. Would DND please confirm that this is still
what is expected.
Response 15: Yes, DND is still expecting a “Commercial Brown” ranging from “tan” or “beige” to
“dark brown”.
Click to expand...

Went to Valcatraz's clothing store the other week to change my general purpose boots.  They were totally out of my size and only issuing  rown boots.  On the bright side, the clerk said the boots that were ripping were quarantined boots that were issued because they had nothing else to give out to the troops.

So we are issuing the rejects. What a sad state we have come to.

duplex drive said:
container, there comfortable, and there is a bit more ankle flexibility, but be prepared to see scuffs. for parade I use daubin polish, its clear and makes them sparkle, Coc knows there isn't anything you can do about the scuffs so don't baby them in a sense.
I've noticed shin strain if the top lace isn't completely tight, just passing it down.
Click to expand...

Ya I have a pair and wore them on Ex in WX this spring, they do scuff easily.  I just use commercial brown polish, most are a bit darker than the actual leather and eventually darken the boot, but nothing that makes it look horrible.  They are light and comfortable, though I would not wear them for a BFT as they don't have a lot of ankle support.
M

Has anybody ever tried a pair of Alt-Berg's?  I am gonna take a chance and order a pair.  Hopefully the British MOD brown will fit our DND brown.

Im going to try the Altberg sneeker model in brown.  They have black and olive too.

Mr. St-Cyr said:
Has anybody ever tried a pair of Alt-Berg's?  I am gonna take a chance and order a pair.  Hopefully the British MOD brown will fit our DND brown.

Im going to try the Altberg sneeker model in brown.  They have black and olive too.
Click to expand...

They look like the Lowa amd Haix boots a lot of guys wear.  My SEK9000s dont look like most boots people wear either and I havent been bothered by anyone.  Even here in QC where they stresd out if you wear non issue socks.
M

They are surprisingly comfortable when you compare them to the general purpose boots. I was pl comd for a DP1 infantry course so I got ample field use out of them.

Word to the wise, water goes right through tongue right underneath the laces.  Boot stays relatively dry in rain but when you walk through wet bushes... your boots fill up. However, they dry out substantially faster than the general purpose boots thanks to the fabric around the ankles. I completed a BFT after a week or so with them, no issues to report there either.  Although, I wear two layers of 5.11 socks so that helps out. The final FTX was 10 days of rain. My feet were wet all the time but I was a DS so... changing gear isn't much of an issue.  I wore one of the pairs on 4 different combat patrols and they are now badly scuffed.

In my opinion, they are a marked improvement over the general purpose boots; I have had no blisters or anything and they only take about 1-2 days to break in before they are really comfortable. As far as maintenance goes, I tried brown kiwi on one pair to get the scuffs out; the boot is a little darker and the scuffs are less visible. The colour works out great when you're in the field, a lot less conspicuous than black.

Was the care and instructions pamphlet that comes with the boot recommending you use polish on them?  I'm not sure applying polish to the desert boots is the way to go, but something more like a suede boot cleaning kit(has a brush, and white bar you rub on scuffs).
M

The instructions say not to put excessive amounts of polish or paste on them. They are brown leather, I tried nubuk oil too but it didn't help with the scuffs.
M

My bad, I was thinking of the old style Arid/Hot Weather boots.

Applying a water proof spray might help the boots repel water if you are going to be wearing them in the rain, etc.

Out of curiosity,  how much darker did the brown polish make the boots?
M

Here: Can you tell the difference? haha 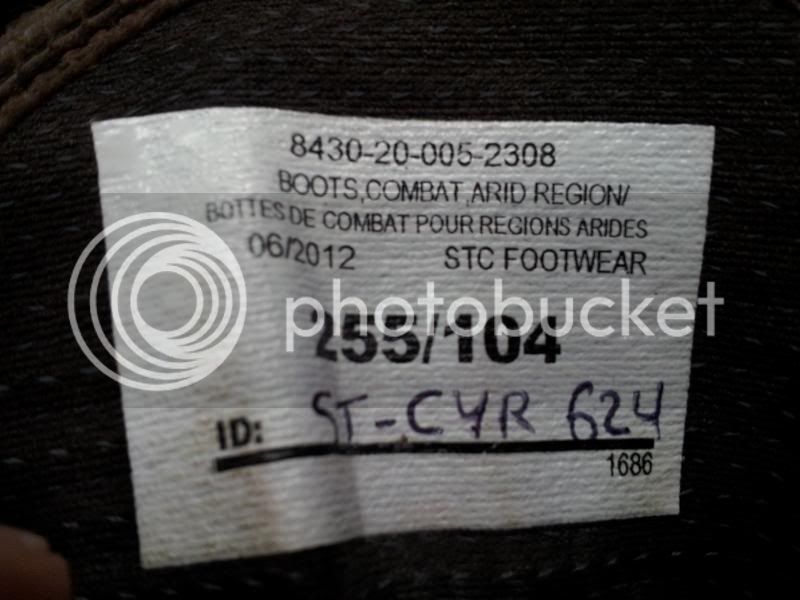 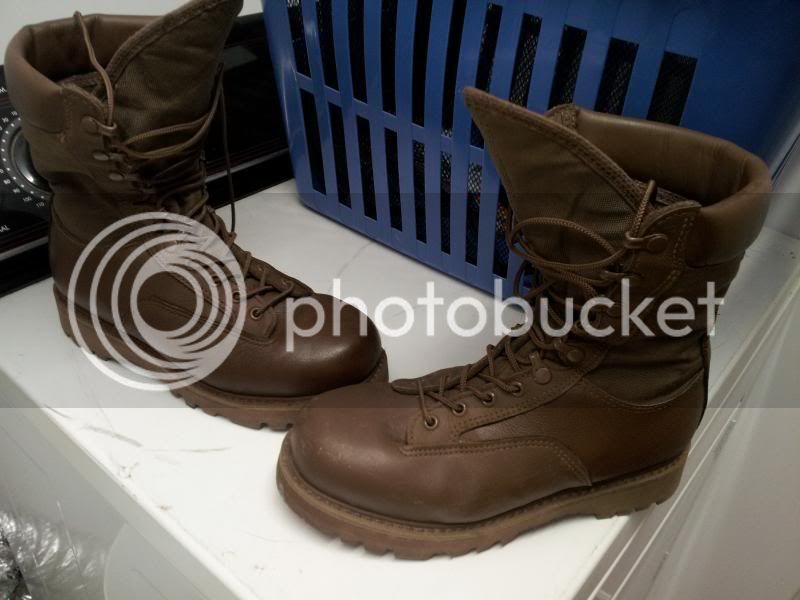 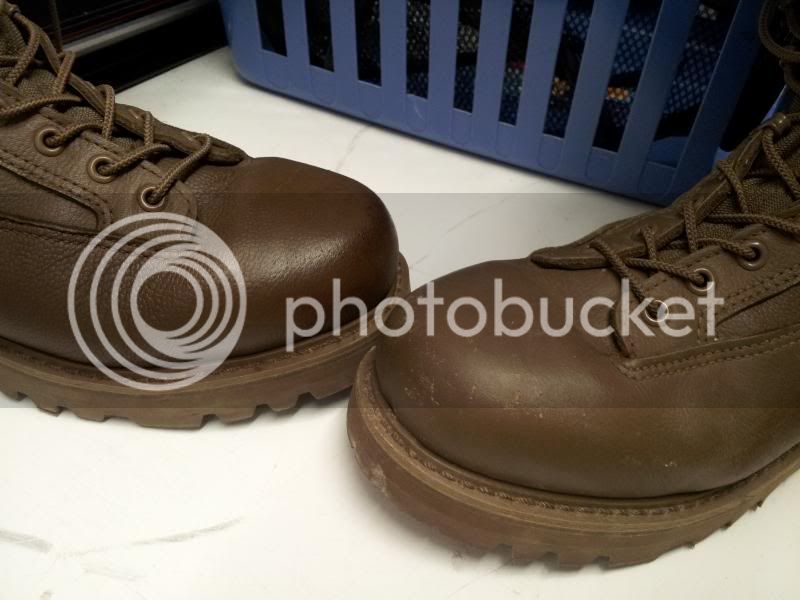 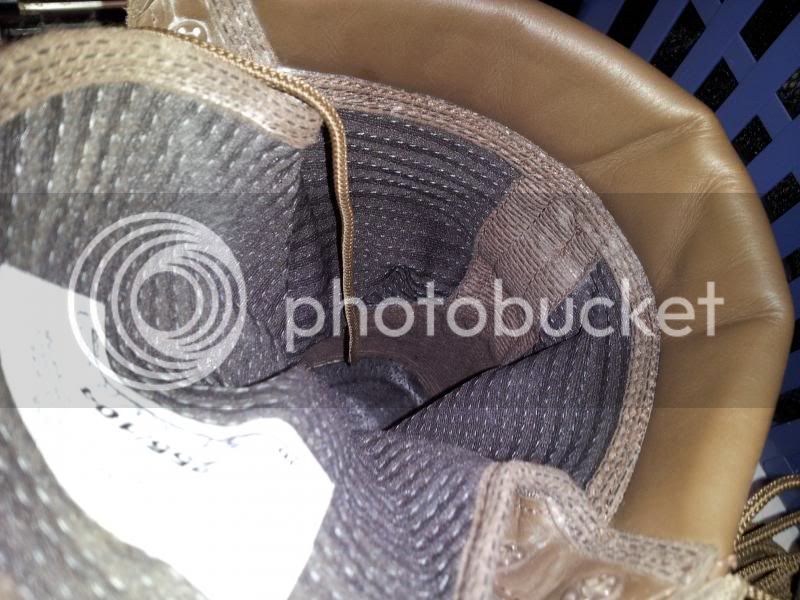 The boot on the left has a light coat of polish and nubuk oil.  They finally fixed the piece of leather on the heal that cut up our ankles and added fabric to cover that up.

Mr. St-Cyr said:
Here: Can you tell the difference? haha

The boot on the left has a light coat of polish and nubuk oil.  They finally fixed the piece of leather on the heal that cut up our ankles and added fabric to cover that up.
Click to expand...

Our Maint O is now on his 4th pair of these useless boots.

Utilizing your pic, boot on the left:

1)  First pair:  Sole split into two. Straight up the whole depth and width of the sole immediately in front of the heel.  They had been worn in the extremely harsh environment of his air-conditioned office for a whole 2 weeks after being issued;

2)  Second pair:  Just above the outside heel, the mesh fabric totally separated and frayed out from the brown leather fabric where it had been stitched.  Again purely office wear and lasted 5 weeks;

3)  Third pair:  Right boot this time.  Total separation of the sole from the leather on the outer edge of the foot beginning at the baby toe and running approx 1.5 inches in length.  2 weeks.


Cue typical CAF boot contract soundtrack:  Ooooops I did it again, I fucked up the boots, I didn't care how important they aaaarrrrre, but now we've got the pips to go with our croooowns

In exactly 30 days of field time, I went through 2 and a half. Many other CF members and CIC call bullshit and I just redirect them here.

ArmyVern said:
Cue typical CAF boot contract soundtrack:  Ooooops I did it again, I ****ed up the boots, I didn't care how important they aaaarrrrre, but now we've got the pips to go with our croooowns
Click to expand...

:rofl:
You must log in or register to reply here.

A
Purchasing Combat Boots in NCR

My University Sacrificed Ideas for Ideology. So Today I Quit.
2 3