Command sense act, i feel honoured to be even mentioned by you. Thats a great post. Plus +10! You've got it all. Tankies arent regular foot sloggers. They dont need a weapon to pick bad guys off with, they need a weapon to ruin the bad guys day and make him shit bricks.
I totally agree with all you've said, especially the ratio's (ie C8 for him, SMG for him etc)
L

Command-Sense-Act 105 said:
The thinking behind these weapons is akin to the pistols that aircrew carry - a weapon of last resort in case you must dismount without grabbing a carbine or SMG to take along.
Click to expand...

We can never count on having anything with us unless it's firmly attached to our bodies in an emergency. The helicopter could be burning or sinking or you may not be able to get back in due to enemy action. We should each have something better than a pistol in the hel, but still need the pistol.

I understand that Israeli tank crews also have pistols for the same reason.

If you were going to wear a pistol all day in a tank, something like the G19 would be a good bet, the G26 is smaller but takes practice to shoot it well. Pilots carry the Sig 235 if I recall correctly?

They had tanker model revolvers, can't see why they can't get a specialized gun again. Although I think the procurement department pretty busy right now...
L

I was looking at a picture with the P90 and F2000 side by side, the difference in size is not great and the F2000 uses the same mag and bullets as the C7, really makes the P90 even less appealing.

Colin P said:
If you were going to wear a pistol all day in a tank, something like the G19 would be a good bet, the G26 is smaller but takes practice to shoot it well. Pilots carry the Sig 235 if I recall correctly?

They had tanker model revolvers, can't see why they can't get a specialized gun again. Although I think the procurement department pretty busy right now...
Click to expand...

Thanks for the correction.

Sorry I was out for a bit and the MWR net sucks ass.

I'm not a tanker and I dont pretend to teach then tank stuff -- but I do have a 10th of a 1/3rd of a schmick about shooting people.  NATO not just PEO Soldier is looking for a PDW -- since the US wants to go back to a .45ACP round PEO is freaking -- the Army killed their monolithic stupidity of OICW and the aborted XM-8 fiasco -- and basically PEO look like the turds they are.  The problem with these staff types in this case is they do not understand the enduser requirement.  What may work or sound nice on a drawing board needs to be immediately shelved if it does not work in combat -- failing that you are empowering the enemy.

Shooting people to neutralise a threat can be accomplished two ways either shutting down the CNS - or blood loss.  Since while neural motor strip shot look really cool but are real fricken hard in the real world -- we need a round that causes massive trauma - in a Hague Convention acceptable manner.
M193 (55gr), M855/SS109/C77 (62gr) and Mk262 (77gr) do a pretty decent job due to they will yaw and fragment at certain impact velocities.

HOWEVER when they do no yaw - they too create small .224 holes -- which tend to look like an icepik.
The issue is to find the best round/platform for yoru requirements -- I tend to argue that the PDW is an answer in search of a problem. 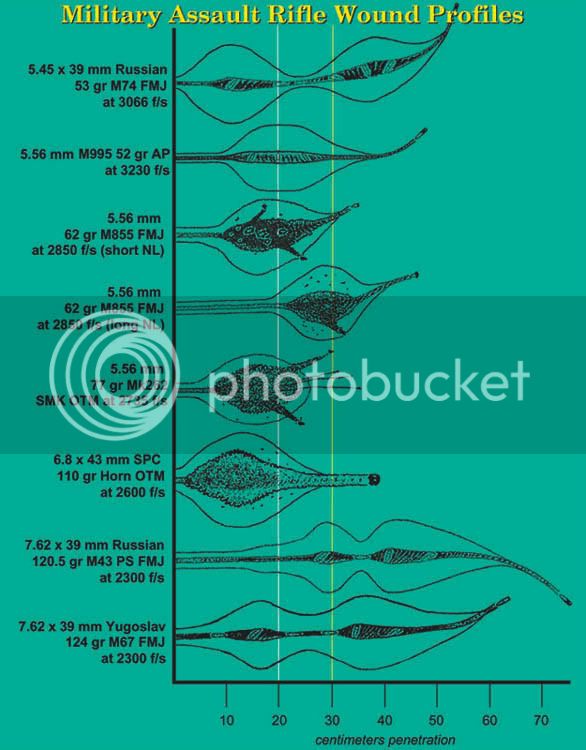 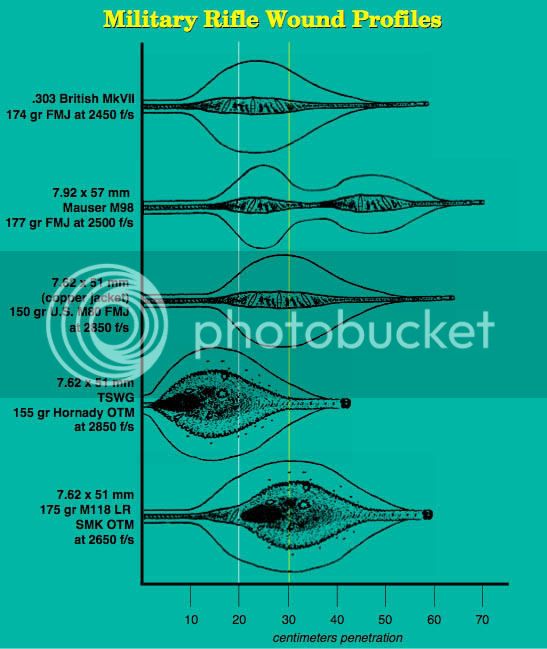 I beleive that 99% of the CSS trades would be much better suited with a C8CQB -- and the same with many personnel in the Cbt Arms.  A 10-11.5" barrel with properly ammunition will be much more effective than most shooters can employ it.  I shot someone with one ~400m so no one come out and say it won't work or you cant hit that far.  The problem is 1) a system that refuses to learn 2) the fact that that system is too cool for non SOF types  :.
WRT the MP-5 -- while it is a good subgun.  Its still 9mm and I would not willingly use it in a long gun role -- heck while I use a 9mm pistol -- it is a 147gr JHP.  Ideally I will be able to find a .45 around here sometime (BigRed has a sweet 1911 he's running around with now).  I've been shot at a few time when the other guys with me had MP-5's -- fine and dandy if your in someone house -- but -- when the other guy brought a PKM or DsHk and is sitting at 700m -- not so fun.

I-6 Does the F2000 have a long enough barrel to make the best use out of the 5.56mm ammo being issued? Have you had a chance to play with one?

I played with one at SHOT one year -- but never fired one.  It appears from fondeling them that they are a better designed bullpup than the Fa-Mas G2, SA80 series and Steyr AUG, but admittedly until I fire several thousand rounds through one - its all subjective.

I've found with other bullpup weapon systems that the ergonomics are ass -- either that or I and 99% of the world are unco-ordinated and did not understand the skill sets required to operate them that the engineer had envisioned  :
Due to the design the bullpuds recoil differently than convetional rifles or carbines -- plus thats a nasty muzzle blast pretty close to the face --

Secondly one of my biggst fears is to return to a two tier weapon system (remember the C1A1 and C1 SMG?) where muscle memory was different - and the drills where different -- the issue was not as bid a deal then (before we really knew what muscle memory was - and before we really payed much attention to CQB ascpects -- I remember shooting 600m with the disk sight on the C1A1) Sorry I digress.  Envisage a weapon that the Infantry (and SOF) would not use -- then imagine the center of excellence for said weapon being with some guy who eats donuts for a living in Base Borden or (worse) the Puzzle Palace.  As if we have not had to relearn people to muscle and effective motion drills for the C7/C8 and C9 -- now was need another Pam written by a moron who's experience with the weapon was using it to pick his nose in QL3...

Infidel-6 said:
Envisage a weapon that the Infantry (and SOF) would not use -- then imagine the center of excellence for said weapon being with some guy who eats donuts for a living in Base Borden or (worse) the Puzzle Palace.
Click to expand...

Your being silly here.  The intent is for a weapon that the infantry don't use (except maybe LAV gunners & drivers).  However, if the Infantry School does not want to be the centre of excellence for this weapon, then it will be the Armd School.  So you can put away your contempt for the CSS world.

Silly was that fat little troll trying to justify his 64 million dollar project -- running around NDHQ with a Hk MP7, FN P90 and the 4" M2 Corps C8 variant, .
Its not contempt for the CSS world -- its revultion for the antics of some specific individuals both in Canada and the US. 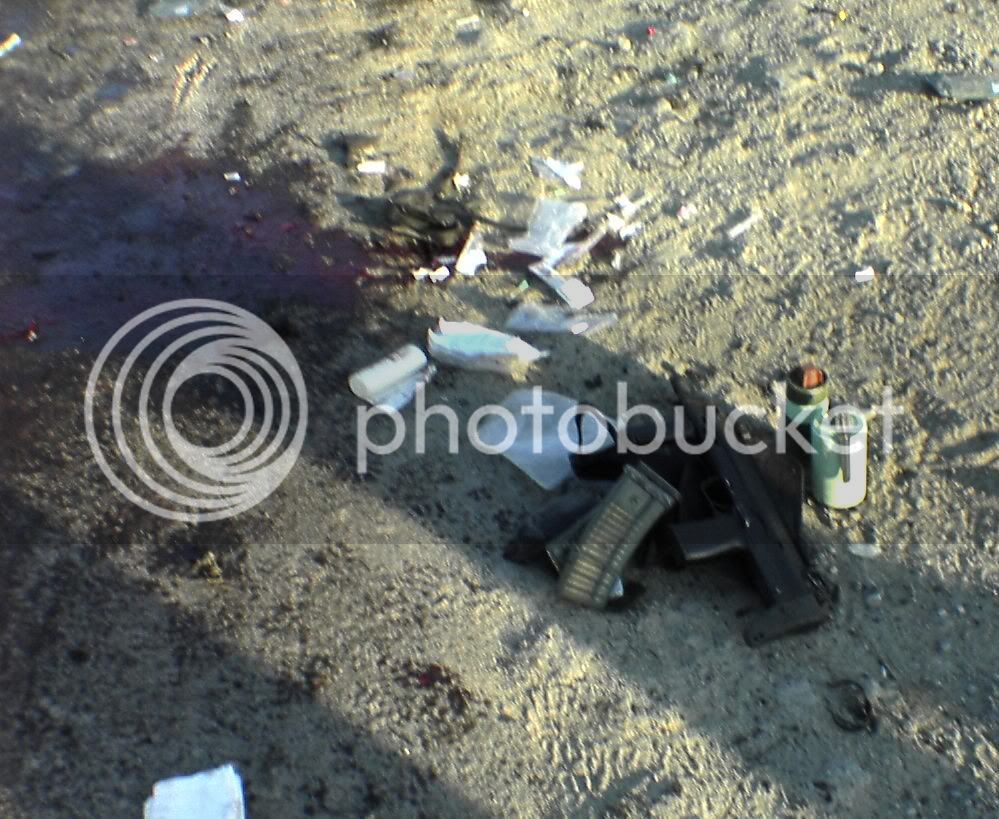 G36 mags beside it 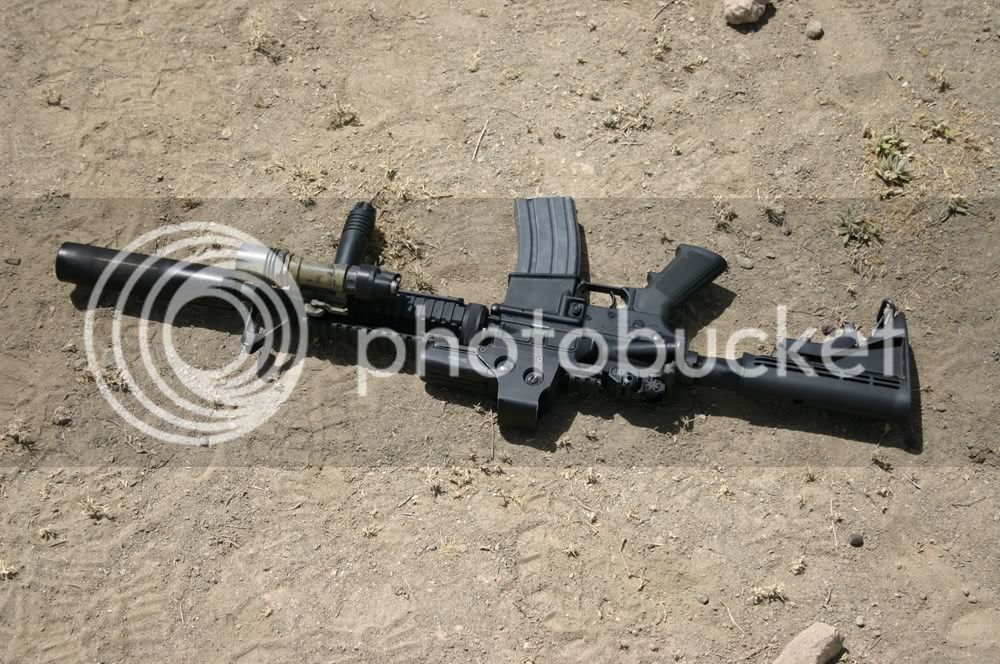 IMHO this setup would be a better (sans can) PDW for 99% of the people out there.

Secondly based on my experiences and other who have way more than I -- I do not beleive that a PSD is a realistic pistol substitute.  There are roles for the pistol that the PSD does not cover either. 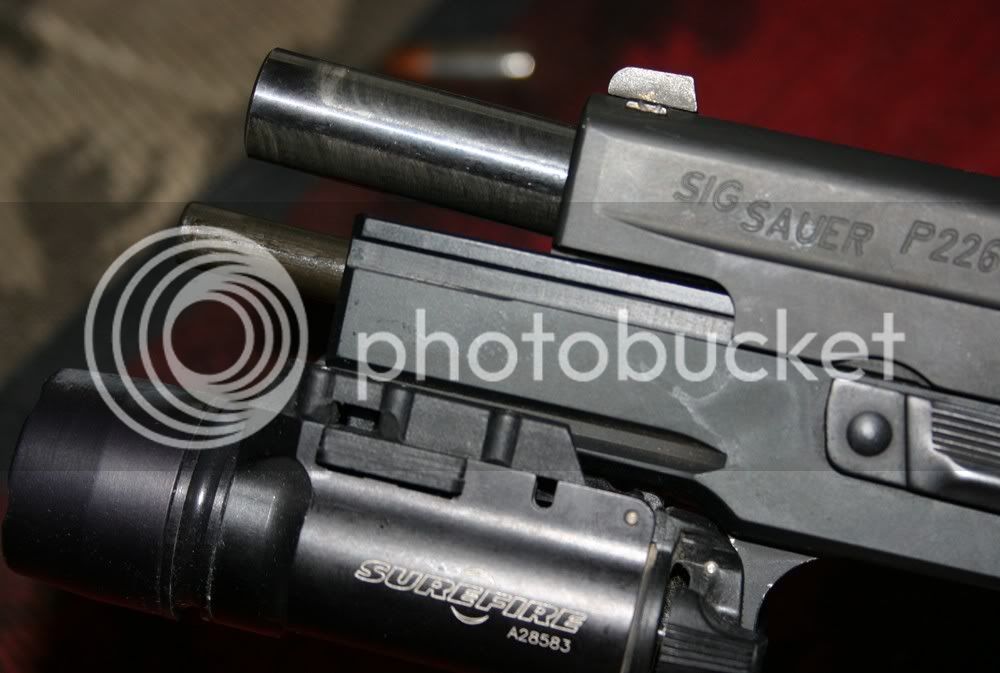 A handgun is much more easily concealed (for those who need to), and can be stowed (holstered or other means) much easier than a PSD when need be.
Secondly it can be fired and manuvered with one hand (if nec) with reasonable accuracy (if your crawling in Mohammed's house and you've already needed to strip down your armour and other stuff and are in a T Shirt..) or so I was told

To get an effective system you need to balance it for the role you require.
A larger (and thus typically more effective terminally) payload will increase recoil energy -- and to tame that the mass of the weapon is increased.  Bullets cause damage by either crush or fragmentation (or a combination of both).  The large diamater of the projectile (all else being equal) will result in more tissue damage.

Keep in mind these PDW's fire a rifle type round (5.7 is a .224 calibre bullet) but at drastically reduced velocities - C77 (M855/SS109) needs a impact velocity of ~2500fps (and greater) to impact human tissue and yaw and fragment.  The longer Mk262 round is ~2200 fps impact velocity (and due to the greater mass causes wounds of a greater degree).  The SS190 round is of the same diameter - but shorter (less likley to yaw) and also leaves the weapon at a lower velocity.

The RCMP and FBI have in addition to USSOC conducted testing with the systems --
Several papers have described the incredibly poor terminal performance of projectiles fired by the FN P90.

Edit MCG -- it is deffinately a ball propellant (my trusty CF SOG tool was used to remove a bullet head -- don't do that at home folk the CF frowns of tampering with ammo)
I will post some pics in a bit -- but I have to go earn my keep for the day.


I don't have any C77 here -- but I have M855 and M856 - so I will put a comparrision of the powers out too -- if I had my scale here I could give a readout -- my civilian Mk262Kev loading for service rifle use an extruded powder (Varget) --
Second point to note is BlackHills (and if the rumoured Canadian 77gr load is a copy it will too) uses a Flash suppressant in the powder as well so the Mk262 has much less muzzle flash at night than either M855 and C77.

Okay back from my daily grind  ;D -- heading to the pool with BigRed - but first 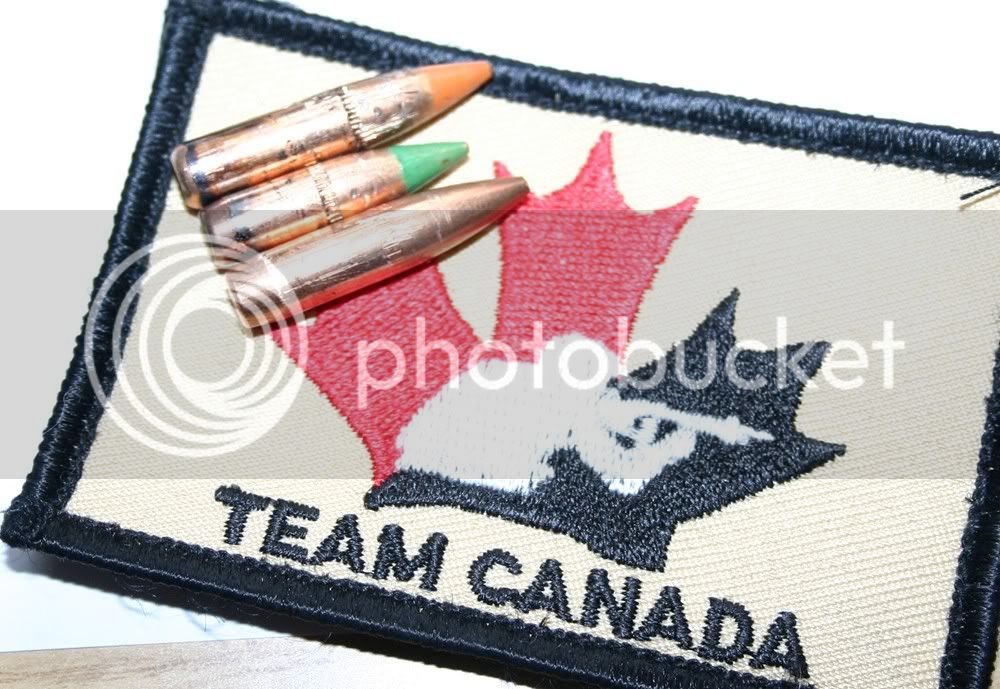 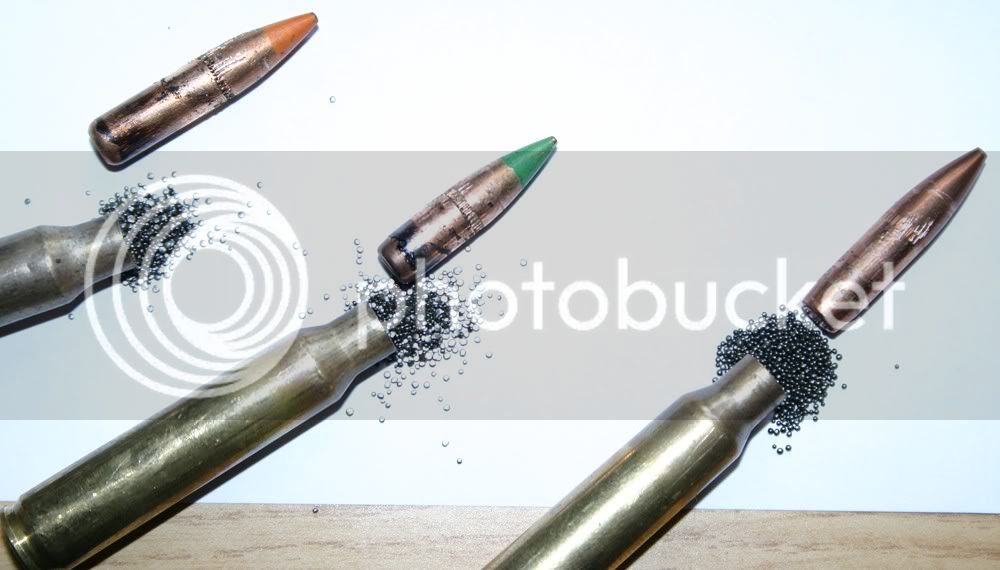 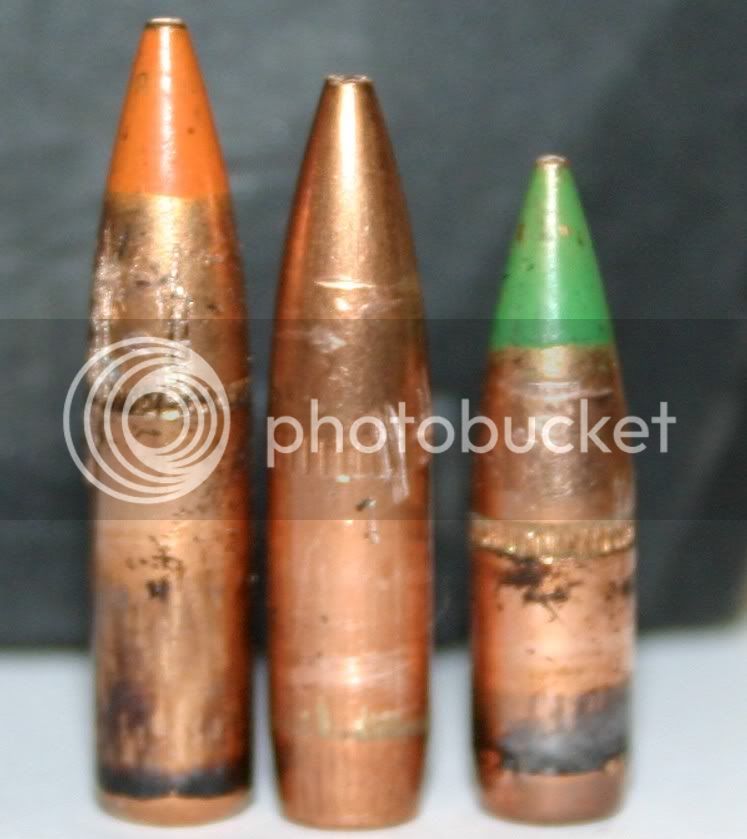 Mk262's ball propellant is much circular than the ones from M855 and M856 -- and Mk262 does not have the tar sealant on the bottom of the bullet.
Mk262 Mod1 uses a cannelure -- while the early and discontuned Mod0 did not have a cannelure (this allows the bullet to be properly crimped into the casing) -- As to the tar issue -- reports showed that the lack of tar increased accuracy and did not make the ammuntion any less weather resistant than ammuntion with the standard tar sealant.

I agree with Kevin, a shorter barrel on the same platform is the way to go for soldiers who carry a rifle while performing their primary combat function (vs those whose combat function is carrying a rifle). A 10" upper with an EOtech and a 20" with a 3.5X ACOG, both fit on the same lower receiver and can be swapped in about 15 seconds.

Muscle memory can not be discounted, my wife laughs at me when I drive her car because I am always hunting for the clutch pedal and reaching for the shifter of her auto equipped car.
You must log in or register to reply here.