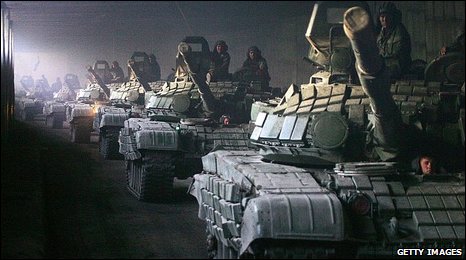 
While Russia made many headlines in 2008 for its military assertiveness, it is still open
to much greater co-operation with the West under US President Barack Obama, foreign
policy analyst Irina Isakova argues.

Russia's actions in 2008 left no doubt that it was interested in being a global partner to
the US and European states in a multipolar world. Moscow denied it was interested in a
revival of Cold War competition with the West. Still, it made it clear that it was ready to
defend its national security and economic interests by all means, including what it would
call an "appropriate level of force". That was demonstrated in the Georgia crisis last
summer.

Its increased military activity was designed to set out the parameters of its "red line alerts",
as a warning against possible US/Nato interventions in the former Soviet Union, and to
show that any attempts to encircle Russia strategically were bound to fail, as the country's
strategic and trade ties extended beyond just its immediate neighbours.

Anticipating a changing world order, with more senior players - where the G7/G8 may give
way to G20+ and other regional groupings - Moscow has also been re-establishing its contacts
and presence in Latin America, Africa, Asia, the Middle East and the Gulf. The most visible
re-emergence of Russia as a global player has been in Latin America. 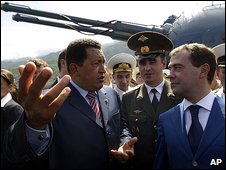 President Medvedev has accompanied
the Russian navy in Venezuela

The unprecedented level of defence-related activities there - in the US backyard - was
meant to prove that Moscow had legitimate economic and security interests in the region,
similar to those that the US has claimed to have in the former Soviet Union.

President Dmitry Medvedev's visits last year to Brazil, Venezuela and Cuba led to substantial
defence deals, as well as agreements to co-operate in energy, space and other hi-tech areas.
They were also accompanied by highly publicised military exercises, like those between the
Russian and Venezuelan navies.

The Russian general staff has confirmed its support for an expansion of naval bases abroad -
but not that Syria, Libya and Yemen have already been earmarked. Despite the global financial
crisis, defence orders remain strong. According to data revealed by deputy prime minister
Sergei Ivanov, Russia earned more than $8bn in arms sales in 2008, with $33bn more in the
pipeline.

And Russia is looking for more buyers. For instance, it is to resume arms sales to Lebanon,
has expressed interest in intensifying defence co-operation with Saudi Arabia, and is
competing with British, US and French defence contractors for orders from Lebanon,
Algeria and elsewhere.

Russia is also considering buying in foreign-made defence hardware, like unmanned drones
from Israel - an unprecedented step. And despite the deepening financial crisis, the government
has promised that its defence procurement programme up to 2015 will be completed in full and
on time. It has reiterated its commitment to provide the military with one trillion roubles ($28bn)
for armaments programmes in 2009 and up to 4trn roubles ($112bn) until 2011.

While these decisions on Russia's defence posture have already been made, the new "military
doctrine", which would specify the main risk and threat factors, as well as potential friends and foes,
is not expected until the end of 2009. A special security council task force is to submit the final
document. The new doctrine is expected to reflect current and forthcoming international developments,
including any changes Nato may set out this year, missile defence deployments, and WMD proliferation. 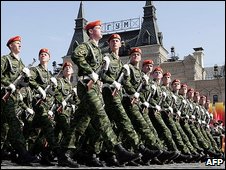 The Kremlin has promised to fulfil an
extensive military funding plan

By delaying submission of the new doctrine, the Russian military gains a certain level of flexibility in
redefining its place with potential partners in response to new US and European security and defence
policy. Plans to reform Russia's military were approved long before the five-day Russia-Georgia war.
However, that speeded up the process, as it demonstrated the need for a comprehensive and urgent
modernisation of the armed forces, and the completion date was brought forward from 2016 to 2012.

The wide-ranging structural reforms cover command and control, the mobilisation of reserves,
education and training, and logistics. They confirm that Moscow's priorities lie not just in defending its
national territory, but also in increasing its expeditionary capabilities. That could allow its armed forces
to increase their presence in international missions like UN peacekeeping or EU disaster relief operations,
as well as providing expeditionary support abroad or monitoring activities along the main trade routes.

Between 2003 and 2008, Russian defence spending increased five-fold. However in real terms, allowing
for inflation and devaluation of the rouble, it may actually only have doubled, according to Ruslan Pukhov,
director of Russia's Centre of Strategy and Technologies. And while that sounds expansive, in fact the
defence ministry and the armed forces in general are to experience cuts in personnel that are
unprecedented in peacetime.

In the next three years the Russian military has to cut 200,000 of its 1.2 million personnel - most of them
officers. This will be done mainly by discharging officers at retirement age or with limited combat
experience.

Russia's six regional military districts will take on a greater role, to be able to resist any hostilities within
their borders and mobilise immediate defence.

The brigade-oriented posture is considered by the military, on the one hand, as a more appropriate module
for responding to current security risks, allowing the country's defence establishment to respond to several
local and regional conflicts simultaneously. On the other hand, it is seen as the best module for co-operation
with US or Nato forces in possible joint operations.

Nevertheless, the essential element of the current defence reform is based around securing active deterrence
capabilities. In September 2008, President Medvedev ordered its military to be able to prevent nuclear and
terrorist attacks on Russian soil by 2020. Establishing adequate missile defence is seen as a counter-strategy
priority. Russia said last year it would deploy Iskander operational tactical missiles to its Baltic exclave of
Kaliningrad, as a response to US/Nato missile deployments in the Czech Republic and Poland.

However, Russia has reportedly put this deployment on hold while it waits to see whether President Obama
will push ahead with the missile shield. It is obvious that the emphasis of the new defence policy could go
both ways. It could be either anti or pro co-operation with the West, depending on negotiations with the
Obama administration regarding Nato's enlargement plans and the new Strategic Arms Reduction Treaty.

The initial START, signed by the first President George Bush and Mikhail Gorbachev in 1991, is set to expire
in December 2009. Moscow has repeatedly stated that the signing of a new nuclear disarmament deal will
only be possible if Washington abandons its plans to place elements of the US missile shield in Europe.

One can therefore see that developments over the next several months will be crucial in deciding Russia's
policy towards co-operation with the West.

Irina Isakova is a freelance foreign policy analyst based in London.
You must log in or register to reply here.

Sweden to increase defence spending by 40% over 5 years