Return of the Battle Cruiser ?

Under pressure from the Navy to develop a new cruiser based on the DDG 1000 Zumwalt-class hull form, and from Congress to incorporate nuclear power, a group of analysts working on the next big surface combatant may recommend two different ships to form the CG(X) program.

One ship would be a 14,000-ton derivative of the DDG 1000, an “escort cruiser,” to protect aircraft carrier strike groups. The vessel would keep the tumblehome hull of the DDG 1000 and its gas turbine power plant.

The other new cruiser would be a much larger, 25,000-ton nuclear-powered ship with a more conventional flared bow, optimized for the ballistic missile defense (BMD) mission.

In all, five large CGN(X) ships and 14 escort cruisers would be built to fulfill the cruiser requirement in the Navy’s 30-year, 313-ship plan, which calls for replacing today’s CG 47 Ticonderoga-class Aegis cruisers and adding a specially designed sea-based missile defense force.

The ideas are taking shape as part of an analysis of alternatives (AoA), due to the Navy this fall from the Center for Naval Analyses, a federally funded research center in Arlington, Va.

Details of the AoA have been closely held, but sources have confirmed that two different designs are being considered. They also say the analysis will recommend dropping the Kinetic Energy Interceptor (KEI) from the CG(X) program.

The KEI is a large ballistic missile-defense rocket under development by Northrop Grumman as a ground- or sea-based weapon to intercept ballistic missiles in their boost, ascent and midcourse flight phases.

The KEI is much larger than the SM-3 Standard missile developed by Raytheon to arm Navy cruisers and destroyers for the BMD role. The 40-inch diameter KEI is nearly 39 feet long, while the 21-inch diameter SM-3 stands just over 21 feet tall. Both missiles use a kinetic energy warhead, intended to ram an enemy missile.

Sources said a missile launch tube for a KEI would need to be so large it would take the place of six SM-3 launch cells.

“That’s a poor exchange ratio,” said one naval analyst familiar with the AoA.

Tactics generally call for at least two interceptors to be launched for each incoming target. Just how many missile cells the AoA is considering for each cruiser variant remains under wraps.

The Missile Defense Agency included money for the sea-based KEI in its 2008 budget request, although the program is concentrating first on developing the ground-based missile, with Northrop’s first flight test next year. No contracts have been issued for the sea-based KEI, said Northrop officials.
Nuclear Cruisers

The analysis group is said to be firm in its recommendation for the smaller escort cruiser. Details are less developed on the nuclear-powered variant, sources said.

Reps. Gene Taylor, D-Miss., and Roscoe Bartlett, R-Md. — the current and former chairman, respectively, of the House Seapower subcommittee — are strong proponents of nuclear power for surface ships, citing concerns about the future supply of oil. Navy officials testified earlier this year that the rising price of oil could soon make the more expensive nuclear option viable, and the House is expected to include language in the 2008 defense bills requiring nuclear power for the new cruisers.

But halving the 209-megawatt plant of current nuclear carriers would yield a bit more than 100 megawatts, enough juice for power-hungry BMD radars plus an extra measure for the Navy’s desired future directed-energy weapons and railguns.

The anti-missile cruiser also wouldn’t require the high level of stealth provided by the Zumwalt’s tumblehome hull, analysts said, since the ship would be radiating its radars to search for missiles. Returning to a more conventional, flared-bow hull form would free designers from worries about overloading the untried tumblehome hull.

“There will be great reluctance to use the wave-piercing tumblehome hull form for the larger ship,” said one experience naval engineer. He noted the DDG 1000 stealth requirement is necessary for the ship’s ability to operate in waters near coastlines, but that the open-ocean region where a BMD ship would operate “means you don’t need to go to the extremes of the tumblehome form.”

“There’s a concern that the DDG hull has stability problems and doesn’t have growth margin,” said a congressional source. A nuclear-powered option, the source said, also would placate Congress, and “a cash-strapped Navy wouldn’t be fully committed to a nuclear ship.”

Nuclear power, of course, comes with a price — in dollar amounts and in size.

An appropriate plant for the ship might cost $1 billion, one source said.

Another analyst, using very rough figures, guessed the cost for a CGN(X) would range from something just under $5 billion to as much as $7 billion.

The Navy estimates its first two DDG 1000s will cost $3.3 billion each, although estimates from the Congressional Budget Office and others put the potential true cost at over $5 billion and as much as $7 billion.

Ron O’Rourke, a naval analyst for the Congressional Research Service, was asked by Defense News to estimate the potential cost for a nuclear cruiser.

“Depending on DDG 1000 construction costs and how the cost of the cruiser would scale up from the cost of a DDG 1000, and also taking into account the additional cost for a nuclear power plant, a follow-on ship in a class of 25,000-ton nuclear-powered cruisers might cost roughly $4 billion to $5 billion.”

The nuclear ship also would need to be larger than the DDG 1000. In separate statements, Navy officials have been hinting that a 20,000-ton-plus ship could be in the works.

Sources said early analyses of the CGN(X) showed a 25,000-ton ship, which the Navy said was too large. More realistic, one source said, would be about 23,000 tons.

Another cost for developing a new power plant for the nuclear cruiser, even if an existing reactor was used, would be time to design a new propulsion system.

“Five years of research and development would be needed to come up with the turbines, reduction gear, shaft and propeller,” said one experienced naval engineer. The Navy now plans to order the first CG(X) in 2011, with the last ship included in the FY 2023 budget.

The Navy declined to comment on the current state of the CG(X) analysis.

“The content of the AoA is predecisional,” said Lt. Cmdr. John Schofield, a Navy spokesman.

Definitely much bigger then the Kirovs(19,000 tons) that are sometimes rated as Battle Cruisers. I wonder if 14 Escort cruisers will be enough for both CSG and ESG?

My guess is that what they may lack in numbers can be made up with the new DDX/DD21 destroyer as it will have a similar capability in its 14,000t hull.Both ships will benefit from automation to reduce crew size which will also act to enhance crew comfort - more personal space.

The problem with reducing crews on warships and what the supposed experts have yet to address is damage control. Unless warships and their crews have become disposable, reducing crew size should not be considered a good thing.

Grinch said:
The problem with reducing crews on warships and what the supposed experts have yet to address is damage control. Unless warships and their crews have become disposable, reducing crew size should not be considered a good thing.
Click to expand...

That and cleaning stations! ;D

IN HOC SIGNO said:
That and cleaning stations! ;D
Click to expand...

No more cruisers in the US Navy in 5 years:

All 22 remaining cruisers are set to leave the fleet by 2027.

The Navy’s proposal is expected to continue years of debate between the service and Congress, as lawmakers have repeatedly criticized the Navy’s push to get rid of the cruisers without a platform to replace them.

Shedding the cruisers has been a thorn in the side of the Navy – and lawmakers – for over a decade, with the service offering various proposals to mothball and later modernize the ships or to decommission them permanently. All of the service’s ideas have been repeatedly rejected by Congress.

The back-and-forth between the service and lawmakers is convoluted, changing in detail and reasoning from year to year, but consistent in the overall theme of the Navy pushing to reduce the cruiser force and Congress pushing to keep the ships until there’s a viable replacement.

“The cruisers right now and the modernization are running 175 to 200 percent above estimated costs, hundreds of days delay. These ships were intended to have a 30-year service life, we’re out to 35,” Chief of Naval Operations Adm. Mike Gilday told the House Armed Services Committee last year.
Click to expand... 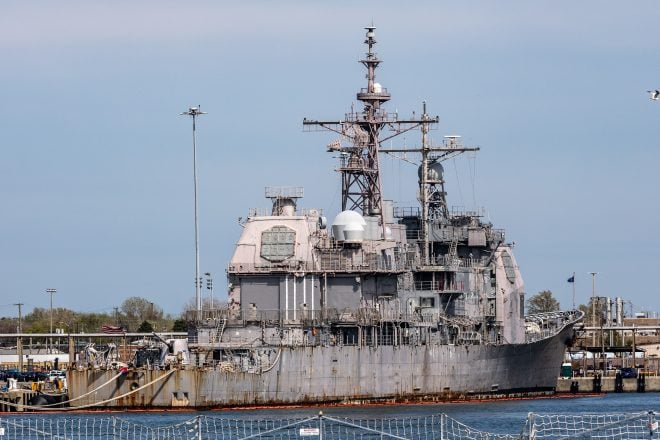 After a Decade of Debate, Cruisers Set to Exit Fleet in 5 Years - USNI News

NORFOLK, Va. – USS Vicksburg (CG-69) is in the middle of a $200 million repair period meant to keep the guided-missile cruiser in the fleet well into the 2030s. Shrouded in scaffolding and white plastic at BAE Systems Ship Repair, shipyard workers have been upgrading Vicksburg since 2020. The...

news.usni.org
You must log in or register to reply here.