The designer of the preferred weapon of our enemy has died.... more on link...

NFLD Sapper said:
The designer of the preferred weapon of our enemy has died.... more on link... 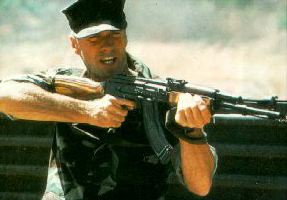 This is the AK-47 assault rifle, the preferred weapon of your enemy; and it makes a distinctive sound when fired at you, so remember it. Gunny Highway

"I didn't put it in the hands of bandits and terrorists, and it's not my fault that it has mushroomed uncontrollably across the globe."

Mikhail Kalashnikov, inventor of the world's most popular assault rifle, the AK-47, a simple and durable weapon of war used by tens of millions in about 100 countries, has died. He was 94.

He died today after a long illness, Elena Filatova, a spokeswoman at Kalashnikov Concern, the plant named after the inventor, said in an interview. He lived in Izhevsk in the Ural Mountains, the town that produces his rifles.

The Automatic Kalashnikov - Avtomat Kalashnikova, or AK-47, for the year its design was finalised - became prized by governments and rebels alike for its low cost, ease of use, light weight and resistance to corrosion and jamming. The Soviet Army made the weapon standard issue in 1949, as did most Warsaw Pact countries and dozens of liberation armies in Africa, Asia and Latin America during the Cold War.
The AK-47 was used in at least 40 of 60 large armed conflicts since 1945, Alexander Uzhanov, an associate fellow at the Academy of Military Science in Moscow, wrote in a 2009 biography of Kalashnikov. More than 100 million AK-47s have been sold worldwide, half of them counterfeit, according to Rosoboronexport, Russia's state arms exporter.

Al-Qaeda leader Osama bin Laden posed next to the rifle in videos he released to the public before he was killed in 2011. Mozambique, an African nation that endured a long civil war after gaining independence from Portugal in 1975, includes an image of the AK-47 on its flag.

Kalashnikov said he came up with the AK-47's design while recuperating from wounds suffered when invading Germans shelled the tank he was driving during the Battle of Bryansk in 1941. He long insisted that his goal had been to design a rifle to help the Soviet Union fend off a German invasion - not to arm extremists or criminals.

"I didn't put it in the hands of bandits and terrorists, and it's not my fault that it has mushroomed uncontrollably across the globe," he said in 2006. "Can I be blamed that they consider it the most reliable weapon?"
Sturdy and dependable, the AK-47 can fire 600 bullets a minute and is so easy to handle that Soviet schoolchildren were taught to assemble it with their eyes closed and child soldiers in African conflict zones are seen carrying them.

The Soviet Union awarded AK-47 licenses to 18 countries during the Cold War, including China, Poland, Romania, Bulgaria, East Germany and Egypt. Many of them continued to make the weapon illegally after their permits expired, then-Deputy Prime Minister Sergei Ivanov said in 2008 in calling for a crackdown on black-market production. Other countries produced copies of the weapon without any license.
Saiga brand

In the US, officially licensed civilian versions of the AK-47 are sold under the brand name Saiga. AK-47s were used in two mass shootings in 1989, in a Stockton, California, schoolyard and a Louisville, Kentucky, printing plant.

US lawmakers outlawed the AK-47 and all other AK models in the assault-weapons ban signed into law by President Bill Clinton in 1994. The law expired in 2004.
Congress and President Barack Obama are again considering new limits on weapons such as the AK-47, in the wake of the December 14, 2012, massacre of schoolchildren in Newtown, Connecticut. The weapon used by the killer in that case, Adam Lanza, was a Bushmaster AR-15, another type of semiautomatic, or self- loading, rifle.

While Kalashnikov said he never made money from his namesake weapon, he did gain a degree of celebrity.

"What you've done has made Russian weapons one of our best national brands," Dmitry Medvedev, then Russia's president, said during a 2009 meeting with Kalashnikov in the Kremlin to mark his 90th birthday. "Kalashnikov is one of the most famous Russian words."

The Soviet Union's official account of Kalashnikov and his firearm was heavy in patriotic appeal, at the expense of accuracy, according to C.J. Chivers's 2010 book, "The Gun."
"The carefully packaged history of Soviet times, a cheerful parable for the proletariat, was that the weapon sprang from the mind of a gifted if unlettered sergeant who wanted to present his nation an instrument for its defence," Chivers wrote. "This was a message made in the Communist Party's propaganda mills. It required redaction and lies."

In fact, the AK-47 "was the result of state process and collective work, the output not of a man but of committees," he wrote.

Kalashnikov fought back when challenged on his role in designing the famous firearm.

"Certain people would like to cast doubt on the paternity of the AK-47," Kalashnikov wrote in "The Gun That Changed the World" (2006), originally published in France in 2003. Citing one newspaper article that had accused him of copying the work of competitors, he wrote, "I'm 83 years old, but unfortunately I'm still here to reply to those mendacious accusations!"

Mikhail Timofeyevich Kalashnikov was born on November 10, 1919, in Kurya, a village in the Altai region of south-central Russia. He was the eighth of 18 children of the former Alexandra Frolovna, a religious Cossack, like her husband, Timofey, Chivers wrote in his book. Mikhail, one of only eight of the children to survive childhood, was weak, small and prone to illness, according to Chivers. Poetry was an early interest, and remained so throughout his life.

The Kalashnikov family, repressed as "kulaks," or relatively affluent peasants, was relocated to western Siberia when Kalashnikov was 10, following Josef Stalin's decree that turned private farms into collectivised state enterprises.

Kalashnikov was drafted into the Red Army and during World War II was wounded while commanding a tank struck by a German shell.

During his recovery, he studied firearms and tried his hand at new designs. Though his early ideas were rejected by the Red Army, he won assignments to military institutes, a weapons-testing facility and an arms-design centre, where, in 1947, he and his chief deputy, Sasha Zaitsev, refined his design into what became the AK-47.

In subsequent decades, Kalashnikov designed more than 150 modifications of the rifle, and other guns.

In recent years he still worked four days a week at Izhmash, the company that produces the AK-47, according to an interview he gave in 2009 to Rossiyskaya Gazeta, the government's newspaper of record.
Izhmash is a subsidiary of Russian Technologies Corporation, the Russian weapons and technology company formed by the government in 2007 and recently renamed Rostec.

With his wife, Ekaterina, who died in 1977, Kalashnikov had four children - a son, Viktor, who has promoted his father's creation at international arms fairs, and daughters Nelli, Elena and Natalia, who died in 1983.

R.I.P.  Mikhail
Even Nobel and Oppenheimer did not initially intend their work to be used the way it finally was.
You must log in or register to reply here.

Brian Urquhart, Troubleshooter for the U.N., Dies at 101