Another "Unknown Soldier" will be repatriated to Canada his home country, Newfoundland.

Remains of unknown soldier to be repatriated for St. John's War Memorial's centennial​

A new tomb will be added to the memorial, containing remains of soldier who died during the First World War 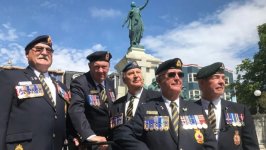 These legionnaires were in high spirits Tuesday following an announcement that the National War Memorial in St. John's will have a rededication ceremony for the site's centennial on July 1, 2024. The centrepiece of the makeover is the addition of a tomb of the unknown soldier, with plans to repatriate the remains of a Newfoundland Regiment member who died in battle during the First World War. Pictured here, from left, are Berkley Lawrence, Gerald Budden, Nathan Lehr, Frank Sullivan and Gary Browne. (Terry Roberts/CBC)
Click to expand...

The Commonwealth War Graves Commission has granted approval for an unknown soldier from the Royal Newfoundland Regiment who died in France during the First World War to be repatriated, with his remains to be interred at a new tomb at the foot of the National War Memorial on Duckworth Street in St. John's.

The tomb will be the centrepiece of a major makeover for the memorial, which will be unveiled during a dedication ceremony planned for July 1, 2024, the site's 100th anniversary.

It's the first time the commission has approved the repatriation of a second unknown soldier to a country, said legionnaire Frank Sullivan, one of a group of veterans who are spearheading what's called the National War Memorial Centennial Project.

There's also an unknown soldier interred at the National War Memorial in Ottawa.

"This is the first time it's ever happened worldwide, and it's so significant it scares you to think about it," Sullivan said Tuesday morning during an interview at the war memorial with a handful of other legionnaires.

The announcement was made Tuesday morning during a ceremony at Confederation Building.

"One of our fallen heroes, courageous, will be coming home," said Premier Andrew Furey.

Gravesite still needs to be selected
St. John's South-Mount Pearl MP Seamus O'Regan said the specially constructed tomb "will contain the repatriated remains of one of our lost sons, cut down too young, and too soon in the Battle of the Somme."

"We are proud that the unknown soldier who will honour all Newfoundlanders and Labradorians who served and sacrificed, will come from the regiment, and the sacred battlefield at Beaumont Hamel," added Lt.-Col. Lawrence Hatfield, commanding officer of the Royal Newfoundland Regiment.

The Commonwealth War Graves Commission is in the process of selecting a gravesite from which to exhume the remains. It's expected the repatriation will take place next summer, a year ahead of the centennial, said Sullivan.

The plan is to have the unknown soldier placed at Confederation Building in the days leading up to his interment so the public can pay their respects, Sullivan added.

Sullivan said he was inspired to lobby for the tomb after learning the unknown soldier in Ottawa was repatriated from Vimy, site of a massive battle in France involving Canadian units.

Since Newfoundland and Labrador did not become a Canadian province until 1949, Sullivan said he didn't feel the unknown soldier in Ottawa represented the sacrifices of the men and women from what was then an independent country.

"Now we'll have our own who will represent our great province," said Sullivan.

Once interred, the unknown soldier will represent Newfoundlanders and Labradorians who served in all branches of the military.

"Soon he will be back, to rest for all eternity in the place that he called home."

And a statement for the CWGC

The Government of Newfoundland and Labrador and the Government of Canada have received approval from the Commonwealth War Graves Commission on the National War Memorial Centennial Project.

An important part of this Project is the repatriation of an Unknown First World War Solider from Northern France. This soldier will be re-interred in a specifically designed tomb at the National War Memorial in St. John’s to represent Newfoundlanders and Labradorians who served in all branches of the military.

This fallen soldier will symbolically honour Newfoundland and Labrador’s war dead from the years before the province became part of Canada in 1949. The process will be to select this Unknown Soldier, transport the remains home and re-inter him in St. John’s. This is similar to process followed when Canada established the Tomb of the Unknown Soldier at the National War Memorial in Ottawa in 2000.

Frank Sullivan, Royal Canadian Legion, Newfoundland and Labrador Command said:
“In 1919, Padre Thomas Nangle of the Royal Newfoundland Regiment had a vision, a dream of a National War Memorial in St. John's to remember our fallen. Work commenced in 1919 and during this time, he requested the repatriation of an Unknown Soldier to be part of this memorial. The request was never actioned. With this approval to repatriate an Unknown Soldier by Sir Bill Rollo and the Commonwealth War Graves Commission for the Rededication in 2024, his vision, his dream will be complete.”

Claire Horton, CBE, Director General, Commonwealth War Graves Commission said:
“We are proud to have been able to facilitate this exceptional step for the repatriation of a Newfoundland soldier from the Western Front who, though unknown, represents the collective contribution and sacrifice of all those who lost their lives in conflict, from Newfoundland and Labrador, for the freedoms we all enjoy today.”
Click to expand...

This is great news.

But I hope this an one and done thing. Being Newfoundland is a special case. I would hate to see every province do this. Sorry if you think it not appropriate putting my comment in for something that is very important and heart felt.

At that time Newfoundland was still a British possession. This is awesome !!

OldSolduer said:
At that time Newfoundland was still a British possession. This is awesome !!
Click to expand...

Yes that is why its a special case. And I agree.

And at the time Newfoundland was not a possession. It was a full self governing Dominion in the Empire.
F

I always thought the Tomb of the Unknown Soldier was a American Hollywood Production for the US Forces, and thought when they did it in Ottawa it was silly and disrespectful. Then I visited the Tomb of the Unknown Canadian. I found it very moving and to be a fitting tribute to all of the fallen of all Canadian Wars. I gave him the name of Uncle Bob, as a family we sent a few to all wars and were lucky only 2 of the 8 sent to WW1, WW2 and Korea, only 2 did not come home. Both have marked grave sites. In Newfoundland this is a special honor, and if I ever make it to Newfoundland I will go and pay my respects because that is the right thing to do. Fitting memorial to the Blue Puttees.

I wonder how difficult it will be to not identify the remains that are repatriated.

While the losses were staggering for the Regiment and the small country at the time, the total numbers were (in the grand scale of the war) not huge.

820 names are inscribed on three bronze tablets at the base of the Caribou Monument in memory of those who died during the First World War and had no known grave. The list includes 591 members of the Royal Newfoundland Regiment, 114 sailors in the Newfoundland Royal Naval Reserve and 115 Merchant Mariners.
Click to expand...

I was watching footage of the 2022 Memorial Day ceremony at the War Memorial and thought that the Regiment's turnout was a little sparce and then was reminded that the previous day (30 Jun), a contingent had laid to rest, in Belgium, the now identified Pte Lambert whose remains had been found, along with those of some British soldiers, a couple of years ago. The only identifying mark that started the process was the metal "NFLD" shoulder title. Modern forensic technique, including DNA, led to the ID. I wonder if the same forensic process will be carried out on whomever is disinterred for a journey home. It could be a second (or third) cousin once (or twice) removed; was never able to figure out that genealogy chart.

As I recall when the Canadian Unknown was brought home - the CWGC only agreed to allow the unknown to be brought back if Canada agreed to never attempt to identify the remains.

I suspect the same sort of agreement will be put in place for NFLD.

Blackadder1916 said:
I wonder how difficult it will be to not identify the remains that are repatriated.

While the losses were staggering for the Regiment and the small country at the time, the total numbers were (in the grand scale of the war) not huge.

Well, barring the other 590 being discovered, I don't think that there will be an issue. I don't know if there was any investigation involving these specific remains, but it's not like they are going to publish his height or anything for someone to sort through the records looking for.

Kilted said:
Well, barring the other 590 being discovered, I don't think that there will be an issue. I don't know if there was any investigation involving these specific remains, but it's not like they are going to publish his height or anything for someone to sort through the records looking for.
Click to expand...

I would expect that the Casualty Identification Program will do their thing.

. . . Investigations for skeletal remains begin when they are discovered and identified as Canadian war dead because of an artefact that identifies Canada, or the military history of the area of discovery. The Casualty Identification Program uses a number of historical and scientific research methods to identify the remains.

Investigations for “unknown” graves begin when external researchers submit detailed research reports that suggests the identity of an “unknown” grave as belonging to a Canadian war dead. The Casualty Identification Program then conducts extensive historical research to confirm the findings and possibly identify the grave.

When the Casualty Identification Program’s investigation is successful, identified human remains are buried with a name, by their unit, and in the presence of their family. When an identification of an “unknown” grave is successful, the headstone is replaced with one that fully identifies the individual and a small rededication ceremony is held. . . .
Click to expand...

'We were good men': Last words of SAS heroes murdered in cold blood