LOVED the series (including the episode cooking for an officer's mess dinner at a Ghurka Rifles barracks) - will have to drag out the DVDs for a memorial viewing.

Clarissa Dickson Wright, one half of TV cookery duo Two Fat Ladies with the late Jennifer Paterson, has died in Edinburgh aged 66.

The former barrister filmed four series of the BBC Two programme before Paterson's death in 1999.

"Her fun and laughter, extraordinary learning and intelligence, will be missed always, by so many of us," said a statement from her agent.

"Loved dearly by her friends and many fans all over the world, Clarissa was utterly non-PC and fought for what she believed in, always, with no thought to her own personal cost," said agent Heather Holden-Brown.

She and Paterson were brought together for Two Fat Ladies by TV director Patricia Llewellyn in 1996, during which they were often seen travelling the UK together in their motorbike and sidecar in search of good British grub ....
Click to expand... 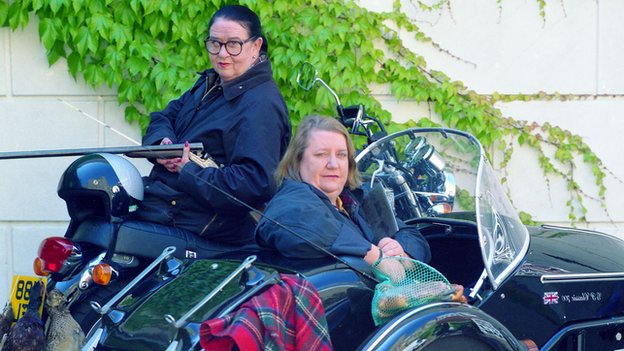 I loved that show.  RIP