Oilers look to give troops a night on the town

For the Nov. 24 Hockey Night in Canada game against the Chicago Blackhawks at Rexall Place, the Oilers are asking their devoted season ticket holders to donate their seats so that troops from the local garrison can use them in a groundbreaking new initiative being called “Tickets for the Troops.”

“We’re happy to have them here and we appreciate the struggle that they’re going through,” Oilers President and CEO Patrick LaForge said in a press conference to announce the program. “The idea, to me, was just a natural.”

The brainstorm of the Oilers Community Foundation, Edmonton’s season ticket base can show their support for the troops by donating their tickets to that Saturday night game. The goal is to pack the house with as many grunts as possible, allowing the soldiers to enjoy a night at a hockey game for free.

The Oilers have about 5,000 season-ticker holders representing 14,000 seats. As a way to collect the ducats, the team has created a package featuring Canadian soldiers flying the Oilers flag overseas with the message, “Join the Oilers and show your support for our Canadian Forces. Donate your seats to our troops on November 24.”

On the back of the photo, which, according LaForge, “Not all of them are still living in this picture,” there is a postage-paid envelope to send the tickets back to the Oilers to pass along to the troops. The game, one of only six home Saturday night dates, should be an emotional night during which the soldiers are warmly welcomed into the place affectionately known as “Oil Country.”

“Hockey, of course, is very popular among the troops and they’re up late at night on missions overseas to watch playoff games and stuff like that because it reminds them of home,” Lt. Colonel Gary Blenkinsop, the Edmonton base commander, said. “Maybe in their travels, they haven’t had a chance to actually be at a game in a long time. Here in Edmonton, the Oilers game will be very popular among the soldiers.”

The offer has only been extended to season-ticket holders, but after mini-plans and additional seats are sold, the request to donate seats will be extended to more fans.

The “Tickets for the Troops” initiative is just the latest example of the NHL supporting the men and women of the armed forces. The Stanley Cup visited troops stationed in Afghanistan last year, and small groups of soldiers are honored at just about every home game around the League. In other sports, such as baseball and lacrosse, teams have traded in their regular colors for camouflage on special occasions to honor the armed forces. But this is the first time so many troops will be welcomed into one barn at the same time, with paying customers giving their seats up for them.

“Every troop is a hockey fan,” Blenkinsop said. “Because they’re Canadians, it seems whether it’s Tim Hortons, or hockey or Don Cherry, they all know it’s a part of Canada’s history and part of our culture.” 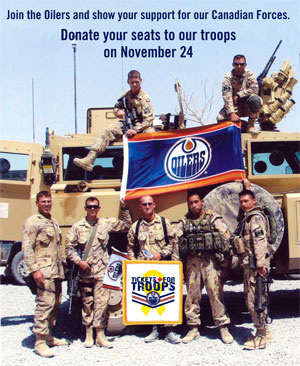 Sorry if this was posted already.

Ran across these pic's of the Tickets for Troops Night. Great idea !!

The game was Tickets for Troops night, which meant that a number of Oilers Season Seat and Mini-Pack Holders donated their tickets to members of the Canadian Forces. At the end of the game, Oilers players went to centre ice and saluted the largely-military crowd
Click to expand...

I watched that game after the leafs got spanked by Phoenix. Toaws(spelling) and Kane are a couple of good players(Chicago). Wish the leafs could get some players. :

Was a great game, and a great gesture from the Season ticket holders, and the Edmonton Oilers.

First, Kudos to the Oilers fans, for giving up their seats so this could happen.

Second can any of our American friends tell us if this kind of thing has ever been done in the USA ?

Perhaps this could become an international idea ?

Nice to see the CF getting recognition.

Sig_Des said:
Was a great game, and a great gesture from the Season ticket holders, and the Edmonton Oilers.

Will have to look for pics.  We has a similar deal in Montreal for TF 3/07 last June.  Exhibition game where some 2000 soldiers heading out to Kandahar were honoured.

jimb said:
First, Kudos to the Oilers fans, for giving up their seats so this could happen.

Second can any of our American friends tell us if this kind of thing has ever been done in the USA ?

Perhaps this could become an international idea ?

They play hockey in UK? I thought it was the "football" craze across the pond....
G

Calgary announced a special "Salute to the Military" night on Dec. 21, featuring hundreds of game tickets for the troops and an on-ice presentation prior to the puck drop. Asking season ticketholders to donate to these fine men and women and their families for home games in December or January, please send them to the Calgary Military Resource Centre.

Yes there are SOME  minor  pro hockey leagues in the UK, but my point was more around  the idea of a " thanks guys event " not just an  exact  copy of the way we are doing this here in Canada.

About the USA............I wonder if NASCAR, or NFL  fans would do something similar, if they knew that the  persons who would get their seats were about to deply, or had recently come home from Iraq ?

Jim B. Toronto.
You must log in or register to reply here.

Hockey Coming Back to Winnipeg?
2