NATO will deploy a permanent full-scale military force on its border with Russia to combat a future invasion, alliance's chief says 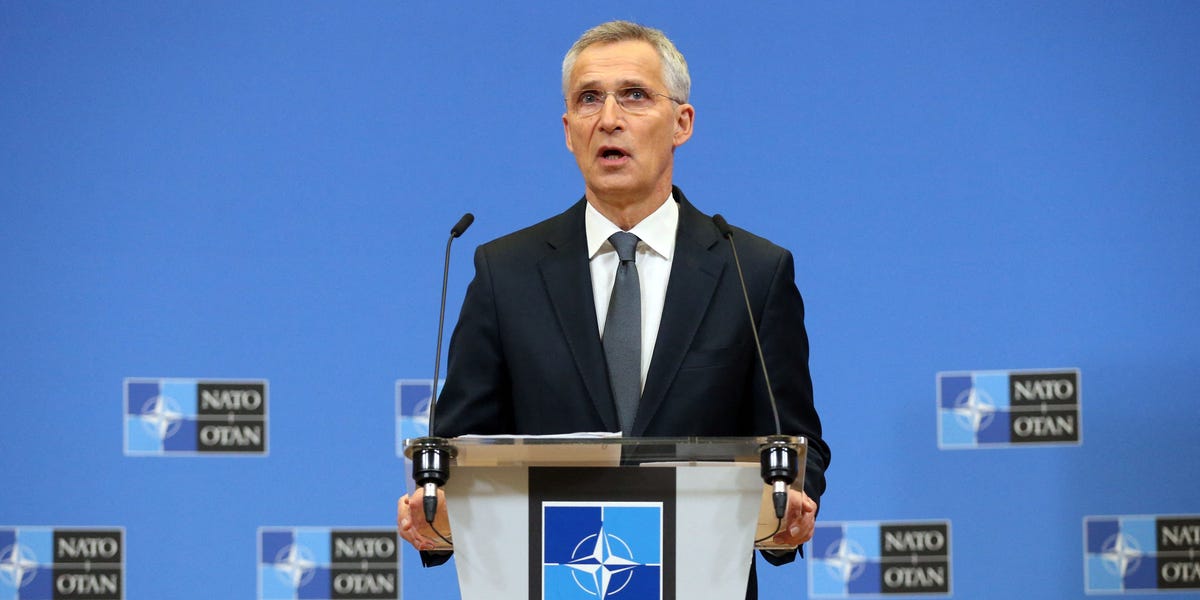 NATO will deploy a permanent full-scale military force on its border with Russia to combat a future invasion, alliance's chief says

NATO Secretary-General Jens Stoltenberg told The Telegraph that the alliance was "in the midst of a very fundamental transformation."

I would like to see more than just a brigade stationed on Russia’s border. As scary as this may sound, the notion of brinkmanship has its advantages for preventing war.

I was never a fan of Ronald Reagen when he was president, especially with his “trickle-down theory” of domestic Reagenomics. However the one thing he did that, in my opinion, succeeded beautifully was how he forced the Russians into an arms race that they could not afford, which contributed significantly to the downfall of the USSR.

So I am in favour of huge numbers of NATO troops on Russia’s border to scare the crap out of them. Dangerous? Probably. But not nearly as dangerous as the way we’ve been doing things for that last twenty or thirty years.

Sometime in the late 1940s or even in 1950, while he was President of Columbia University, General later President Eisenhower developed his "tripwire" theory which became, de facto, Western doctrine. Ike said, in a letter, I think, to someone in the Truman administration but which was widely circulated, including to Louis St Laurent, that he expected the Soviets to deploy millions of men on the inner-German border to threaten the West. The natural response, he said would be to want to deploy almost as many Western soldiers there to face them down.

That response, Eisenhower said, would be wrong. The best place for millions of young Western men, he opined, was at home: growing crops, building homes and roads and cars and refrigerators and washing machines. That he suggested, not standing "nose-to-nose" against the Russians is how the US-led West would win.

What was needed in Europe, Ike, said, was a tripwire force ~ a smallish force of professional, regular soldiers who could fight a mobile defence in depth (I'm not sure he used those words, I think they come later) which would be only one part of a full response that would include tactical and, if necessary, strategic nuclear weapons. (Remember, please, that this was before the first H-bomb was tested (1952), before the first B-52 was delivered (1955) and before the first ICBMs flew (1957). The difference between strategic and tactical nukes was not huge, the real difference was the nature of the targets. Ike probably intended to bomb the second echelon forces while they were forming up.) This idea formed the basis of what I believe is still NATO's policy which is NOT to agree to "no first use." Ike disliked nuclear weapons and he hated the idea that America had been the first country to use them but he understood their value and he was, always, morally willing to use them again to save Western lives.

Ralph Bunche, Mike Pearson and Brian Urquhart used the same tripwire notion in 1957 when they proposed a large, lightly armed UN peacekeeping force in the Middle East to separate Israel and Egypt ~ it was significantly different from the previous (late 1940s) peacekeeping "observer" missions on India's and Israel's borders.

It seems to me that what Secretary General Stoltenberg is proposing is that tripwire, yet again. The notion is that the tripwire doesn't have to be huge ~ just big enough to put up a credible fight because it is backed up by a nuclear arsenal that America and Britain are able and willing to use.

(I believe it was that letter, as much or even more than anything else, which persuaded St Laurent to ignore Grant (CNS), Foulkes and Simonds (CGS) and tell Brooke Claxton to press ahead with his plan to "professionalize" the Canadian Armed Forces even as the global strategic situation was nearly falling out of control.)

Edited to add: The tripwire idea may have been Gen George Marshall's, I'm not sure. The references I have seen credit Eisenhower but it is generally accepted that Ike didn't say or write much that wasn't, at least blessed if not originated by Marshall.
J

E.C. I agree that a “tripwire” may be all we need. On the other hand…Putin may see it as NATO using minimal force to basically blunt any Russian advances. In which case he hasn’t really suffered all that much from a military perspective. Also, he doesn’t need to worry that NATO will, for some reason or other, go on the offensive and attack Russian territory. But if the NATO forces are substantial and on his border he will be forced to spend more money (which Russia cannot afford) on countering the NATO forces.

Back in the 1950s the Soviet Union was a much different beast than today’s Russia. Their economy was never robust but at least they could count on some of their satellite neighbours for military support. Also, back then, many of their supposedly awesome weapons (including planes and missiles) were more Mayday Parade pieces that Looked far scarier than they were. In many cases, some of their advanced weapons were just hollow shells and never went into production.

I think Putin is counting on NATO assuming a very passive role in what’s happening today and, knowing that he controls the narrative, will only back off when he’s gone a bridge too far. That’s what he’s been doing for 30 years now and what makes him a survivor. In the meantime he has all but declared war on the western world in the form of undermining our society through internet subversion. It’s NATO that must control the narrative and put him on the defensive In every way, militarily and economically. Then perhaps the Russian people will put an end to him and people like him, and Europe can once again live in peace.
S

Hard to believe there needs to be any more NATO forces in eastern Europe right now. I'm pretty sure Putin has his hands full with Ukraine. Huge US presence in the UK, Germany and Italy alone. I can see a need for substantial force in Ukraine at the conclusion of this debacle though

suffolkowner said:
Hard to believe there needs to be any more NATO forces in eastern Europe right now. I'm pretty sure Putin has his hands full with Ukraine. Huge US presence in the UK, Germany and Italy alone. I can see a need for substantial force in Ukraine at the conclusion of this debacle though
Click to expand...

EOD and reconstruction is going to be busy

The US DoD Force in Europe is 250k Pers. Soldiers, Sailors, Marines and AirForce (Air People? As Airmen is no longer kosher).

Clearly it’s not a standing force, it’s nearly 3x the forces we have had in Europe for the last 20 years. It’s way too many forces for simply defense. It is an intentionally large invasion force designed to make Putin think.

Aviators are pilots, perhaps Aviationators
You must log in or register to reply here.