While the country celebrates Canada Day in whatever fashion current circumstances permit, Newfoundlanders concurrently take a moment to remember our war dead.

In a normal year, Terry Hurley rises early on July 1.

By 8 a.m., he'd already be in downtown St. John's, preparing for the Memorial Day parade in his role as parade commander.

This year, he's at home, sitting on his deck.

The pandemic may have cancelled the annual Memorial Day ceremonies that traditionally fill the morning of July 1 with sombre remembrance and a march through the downtown streets, but veterans like Hurley are still marking the day with inward reflection.

Hurley did nine tours overseas during his lengthy military career that only ended when mandatory retirement kicked in at age 65.

Missing out on seeing other veterans is hitting him hard this year, particularly because some of them — now in their 90s — inspired him to follow in the footsteps of his four relatives who fought in the First World War.

"It just brings back so many memories for me," he said.

His wife Roxanne Hurley, who served before an injury forced her out of the military in 1997, also looks forward to the ceremony each year.

"It is disappointing that we can't go down and parade like we normally would. But I do understand the concerns about the pandemic that we're in," she said.

Instead, she'll spend part of July 1 by her flower bed, where her pink and blue forget-me-nots are blooming.

"I'll probably just go there, and sit at the side of my garden, and just reflect on those that fought for us in the First and Second World War," she said.

'There's no fanfare'
In place of the usual march to the National War Memorial, a few dignitaries and representatives from the Royal Canadian Legion and the Royal Newfoundland Regiment performed a short ceremony and wreath laying at the monument, the surrounding sidewalks empty of the normal thousands of spectators.

The legion asked the public not to attend, and posted a Facebook livestream in its place, although a few passersby stood at a distance and watched.

"There's no bands, there's no parades, there's no fanfare. And unfortunately, that's the way it has to be," said Nathan Lehr, the president of the province's division of the Royal Canadian Legion.

Lehr directed all 45 legion branches in the province to follow suit, allowing a maximum of five personnel to perform a short ceremony and salute. To everyone else, Lehr asked they take a private pause to remember sacrifice.

"Speak about it, and pay your respects in your own way, that's all I can say."

July 1 is a double holiday across Newfoundland and Labrador, marking not only Canada Day but also the contributions of the province's veterans. It coincides with the First World War Battle of Beaumont-Hamel, when more than 800 Royal Newfoundland Regiment soldiers leapt from the trenches of the French battlefield in an ill-fated attempt to drive back German soldiers on the morning of July 1, 1916.

Just 68 men answered roll call the following day, and the battle's legacy has lived on and shaped the Newfoundland and Labrador psyche.

Overseas ceremonies
Wednesday morning in northern France was an overcast one, as a group of less than 35 people assembled at the site of the Beaumont-Hamel Newfoundland Memorial for a short ceremony, instead of the normal day-long series of events that dot the Somme.

Among the government representatives, diplomats and handful of locals in attendance was Arlene King, the program manager of operations for Veterans Affairs Canada, and a Newfoundlander herself.

"The skies were grey and very sombre, which actually I think reflected the history and the emotion that came through in the speeches... people said it was a very poignant ceremony," she told CBC Radio's St. John's Morning Show.

Beyond King, there was no Newfoundland and Labrador presence on hand to contribute to the ceremony, but a few Royal Newfoundland Regiment recordings were used.

"While they weren't here in person, they were certainly in our thoughts and our hearts," said King.

A recording of the provincial anthem Ode to Newfoundland was played. Its lyrics predate the conflict but ring true to the occasion, with the line where once they stood, we stand, often used to memorialize veteran's sacrifices.

The nearly empty memorial site stood in stark contrast to an area that functions as a place of pilgrimage for many in Newfoundland and Labrador, among others.

King said the site used to welcome about 80,000 people annually, but in the years leading up to and after Beaumont-Hamel's centennial in 2016, the number has grown to more than 175,000 in a normal year.

"It has grown exponentially, it's amazing," said King, adding many of those who visit are young people, learning about and connecting to history.

Visitation this year probably won't be anything near that number, although as public health restrictions have eased in France King said a trickle of locals have been coming back, "which is lovely."

Having served her post for almost 20 years, King is set to retire soon — a milestone, like so many others, interrupted by COVID-19 — meaning Wednesday's ceremony is her last in an official capacity.

"It's an absolute honour to have played a very small role in helping to commemorate the history," she said.
Click to expand...

Similar to the lady mentioned in the article, I scattered some "forget-me-not" seeds in the flower bed along side my home last year (that's about the extent of my gardening skills or interest) and have been rewarded with some flowers.  The forget-me-not was the designated flower of remembrance in Newfoundland before the poppy was added for Armistice Day.

Spectators gathered in St. John's Friday for a sombre service to honour the Royal Newfoundland Regiment, which lost many of its soldiers in a First World War battle more than a century ago.

The battle was a defining moment for the Regiment, many of whom never came home, and has etched itself into Newfoundland history.
On July 1, 1916, British and French forces attempted to take German soldiers by surprise, but failed. Only 68 Newfoundland Regiment members were able to fight the following day, with over 700 wounded, killed or missing in the span of those few bloody hours. 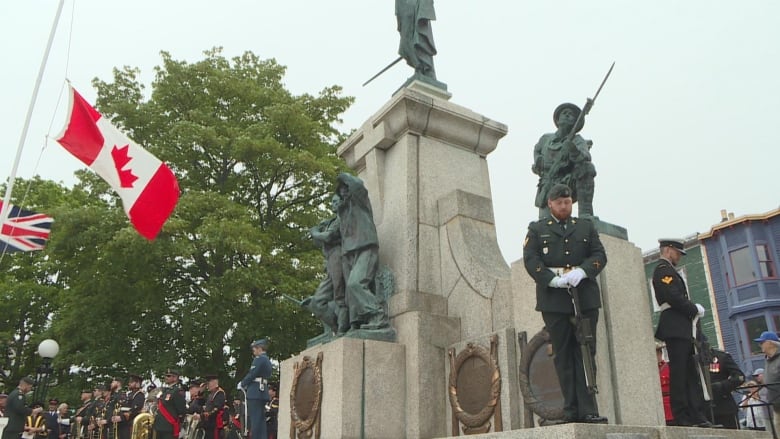 The War Memorial in St. John's is the site of the annual remembrance service. (Garrett Barry/CBC)

On Friday morning, David Akenhead placed war memorabilia at the foot of the memorial to the fallen solders.

His great-uncle, David, served as a medic with the British army and teamed up with the Newfoundlanders. He aided the Regiment a few months after Beaumont Hamel, at the Battle of Flers–Courcelette, where tanks were used for the first time.

"It's what they call a pyrrhic victory," Akenhead said. "It scared the lights out of the opposition momentarily." 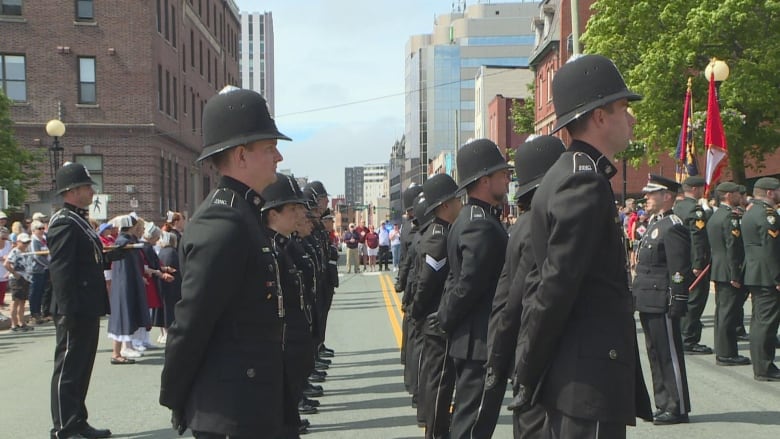 Perry Grandy, chair of the Royal Newfoundland Regiment Advisory Council, addressed the crowd, telling the tale of the Regiment's most harrowing challenge.

"The First Newfoundland Regiment was a proven combat unit.... Members were in excellent spirits, and there was little sign of tension or anxiety," Grandy said.

"They were an impeccable example of cohesion, teamwork and deadly efficiency."

But those qualities couldn't prevent the slaughter that lay ahead.

"The battalion was decimated, reduced to just over 10 per cent of its strength," he said.

"A generation of future fishers ... was lost to war."
Click to expand...