I'd forgotten about this one...

Today – May 8th - in 1984, a mentally distressed Canadian Army Corporal stole two C1 submachine guns, and a pistol from CFB Carp. He sent a disturbing envelope with the message "The government now in power is going to be destroyed" to the local radio station.

Before authorities could be contacted, he had stormed the National Assembly of Quebec killing 3 people, and wounded 13 others. Due to a scheduling fluke, no politicians were sitting in the National Assembly that morning, which enraged the gunman. He mounted the Speaker's seat and sprayed rounds wildly all around him. Several hostages, and wounded victims huddled under chairs and desk. They were completely helpless as the gunman screamed incoherent demands and continued to shoot random bursts around the chamber.

As the mad man rambled on, and continued to shoot, Sergeant-at-Arms René Jalbert entered the room. Jalbert had fought with the famous Royal 22e Régiment ("The Vandoos") in France during WW2, and throughout the Korean War. He was also one of the few Canadians who had seen service in the Vietnam War under ICSC Command.

He approached the gunman from behind, and quietly asked "How are you doing?" in French. The gunman proceed to empty a magazine inches from Jalbert's face as a response.

Completely unbothered, Jalbert responded "I am a soldier, like you", and lit a cigarette. His exchange with the gunman at this point had allowed the hostages and wounded to escape. He offered the gunman a smoke, and brought him down to his office where they talked in private.

After four tense hours, the gunman surrendered to police without further incident. Jalbert was awarded the Canadian Cross of Valour for his heroics that day, defusing the situation with some cigarettes.

Jalbert passed away in 1996. A characteristically humble man in life, despite his extensive military record and heroics in 1984, he is buried with a simple marker reading "Major René Jalbert - An Officer and a Gentleman". 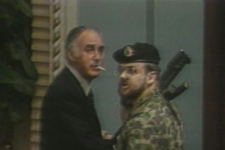 I was in Ecuador when this happen, could not figure out what was going on, so went to the Canadian Embassy, where the Ambassador invited me into his office for coffee and let me read some of his reports on the matter. Couple days later sitting in a hotel with some American girls, bumped into him, he joined us for a beer and after he left I told them who he was, they were shocked as their ambassador would never socialize with common tourists.

I remember this episode quite well. Lortie lived down the street in SHH at Uplands. While acquainted with him, it was mainly to see him around the neighbourhood or on the few occasions when I had contact with him when he came to the NDHQ MIR where I worked at the time. The reasons for his medical visits in the period just before this were the subject of interviews that some of the MIR staff had with investigators following the murders in Quebec.
You must log in or register to reply here.