In the late 1700s, a King of India developed rocket artillery that fired swords in order to fight the British

Mysorean rockets were the first iron-cased rockets successfully deployed for military use. Hyder Ali, the 18th century ruler of Mysore, and his son and successor, Tipu Sultan used them effectively against the British East India Company during the 1780s and 1790s.

Their conflicts with the company exposed the British to this technology, which was then used to advance European rocketry with the development of the Congreve rocket in 1804.

Hyder Ali’s father, the naik or chief constable at Budikote, commanded 50 rocketmen for the Nawab of Arcot. Tipu Sultan brought the concept of using sword and blade thrust rockets in their military force to fight the advancing British army. There was a regular rocket corps in the Mysore Army, beginning with about 1,200 men in Hyder Ali’s time. At the Battle of Pollilur (1780), during the Second Anglo-Mysore War, Colonel William Baillie’s ammunition stores are thought to have been detonated by a hit from one of Hyder Ali’s rockets, contributing to a humiliating British defeat.

Hyder Ali and his son Tipu Sultan deployed them effectively against the larger British East India Company forces during the Anglo-Mysore Wars. These ‘missiles’ were fitted with swords and traveled several meters through the air before coming down with edges facing the enemy. 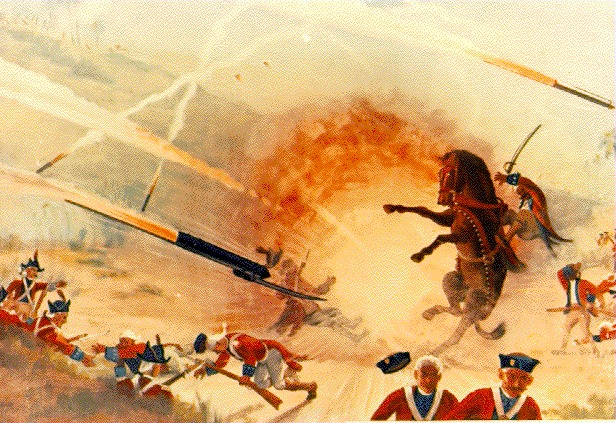