An old report and my apologies if this has already been posted. Its an interesting article on the sinking of a decommissioned Oliver Hazard Perry-class frigate USS Rodney M. Davis by US and allied forces, including HMCS Winnipeg which launched one Harpoon missile at the ship.


The U.S. Navy released video of a sinking exercise, or SINKEX, from the 2022 Rim of the Pacific (RIMPAC) exercise off Hawaii on Saturday.

The frigate eventually sank into 15,000 feet of water after a barrage of bomb and missile hits. Named for posthumous Medal of Honor recipient Marine Sgt. Rodney Maxwell Davis, the frigate was commissioned in 1987 and spent its nearly 30-year career in the Pacific. It was the second to the last example of the class to be built.

Decommissioned in 2015 and was reportedly considered for donation to Ukraine in 2018. The former Rodney M. Davis is the most recent of several sister ships to be sunk as targets in recent years, joining the Thach, Ford, and McClusky to name a few. This week's sinking comes on the heels of June's Valiant Shield exercise in the Marianas Islands, when the ex-USS Vandegrift met its end in a SINKEX off Guam. Last summer's Valiant Shield exercise saw the ex-USS Ingraham, the last Perry-class frigate built for U.S. service, torn to pieces with air attacks and a devastating torpedo hit.

The Winnipeg and the Poseidon fired Harpoon anti-ship missiles at the former Rodney M. Davis, while the Lekir fired a French-made Exocet Block 2. 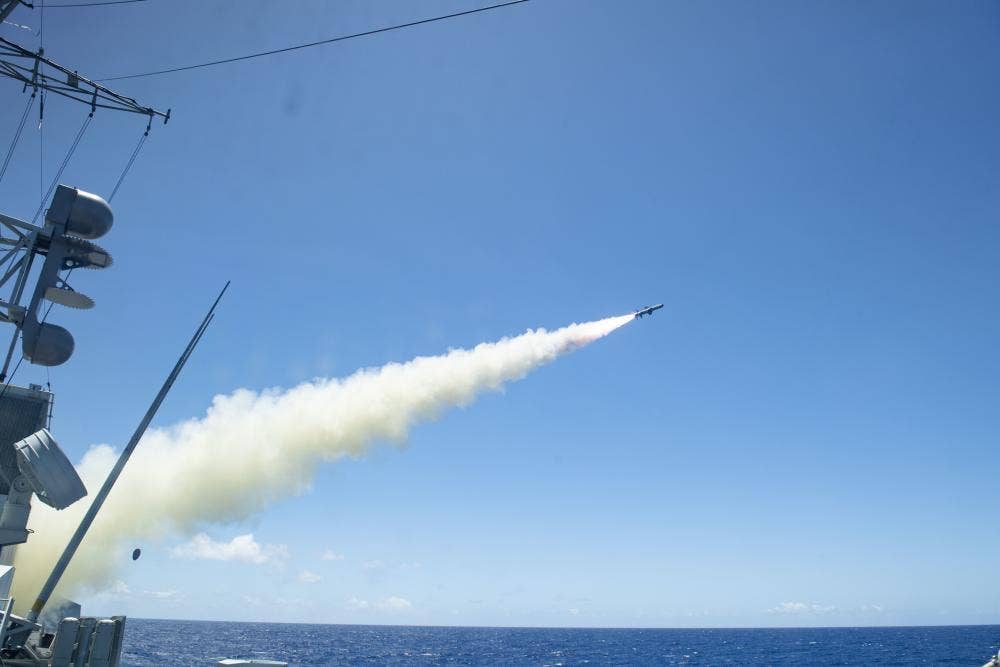 While the tough old warship remained afloat and burning after numerous hits, it’s important to note specific conditions for such sinkings that make the damage done both more and less survivable.

First, there are no combustibles aboard, be that equipment, fuel, or ammunition of any kind, so secondary explosions shouldn’t happen and fires have less to consume and thus spread. Second, there’s no crew for damage control efforts to mitigate the ship’s injuries. Finally, compartments are sealed throughout the ship to make it even more resilient. So, the true severity of these attacks, as seen in the video, is a bit skewed.

There’s indisputable value in using weapon systems for real, planning the strike and feeling a ship reverberate from a missile leaving the canister, or that telltale release of a bomb falling from a fighter’s pylon. It’s also living proof that these legacy weapons like the Harpoon, Exocet, and Paveway can still hit hard despite their age.
Now their effectiveness against a modern surface combatant trying to defend itself, that's another issue.

A warship closed up for combat is a abnormal condition?

Colin Parkinson said:
A warship closed up for combat is a abnormal condition?
Click to expand...

Yes. Action stations isn't normal sailing condition, ship gets even more compartmentalized. Usually a number of doors and hatches are left open (but still more watertight zones than you have on a commercial ship). It takes forever to get from A to B in action stations.

Colin Parkinson said:
A warship closed up for combat is a abnormal condition?
Click to expand...

Yup- what Navy Pete said. There are a varying degrees of warfare readiness states, which all have implications on what hatches/doors can be open, what maintenance can be done and what equipment is allowed to be flashed and what weapons systems are loaded/fully powered up.

There is more than closing things up for watertightness in action. As you an see in the video, it's fire that ultimately dooms the frigate to her death. Modern missiles are designed to set the ship on fire around the impact point. The Falkland taught the Western navies that. Ships in the Falkland war were lost because the crew was overwhelmed by fire and smoke, so nowadays, even in sections not relevant to watertightness (such as the superstructure), we have closing doors and curtains that are closed to create smoke control zones. That is yet another impediment to ease of movement onboard. Obviously, when not in action, such sections can be completely open while steaming.
You must log in or register to reply here.

‘You’re on your own’: US sealift can’t count on Navy escorts in the next big war