I was wondering if anyone could help me identify my Great Grandfather's uniform and the year/war? I don't even know if it's Army or not. He would be 100-103 if alive today, and was from Nova Scotia.

The uniform appears to be WWII vintage.  However, the basic battledress of the Second World War lasted well beyond the war years as the standard issue uniform.  The picture here does not show any identifying features such as unit insignia, brigade/division patches, or medal ribbons.  If you had any other articles from his service, they might help narrow it down a bit.  Other pictures showing the full uniform or some of these other features might help.

further, there are links and Subject Matter Experts on the boards that can help you identify exactly what units he served in, when, and where. They will need some info to do it, and I don't expect you to post it on open boards, but you may want to have it at hand -

his full name,
place 7 date of birth/death
the years of service (approximate)
was he in WW I or WW II
do you have any idea what he did?( Infantry? Cook? That sort of thing.)

The more info you can provide them, the easier it will be for them to help you.

As I said above, there are some links on the boards, in this forum, that any Canadian can use to discover their family's military background.
L

Unless my guess of his age is off. How old does he look to you?

Or maybe it's not my great grandfather, but my grandfather - who I never met but who would have been born around 1925.

I wish I had more information, I lost my great grandmother 5 years ago (at the age of 96!) and my grandmother shortly after. No one in the family seems to know anything except the fact that they say it's my great grandfather, who would have been approx 12-19 during WWI and 33-46 during WWII.

Did people back then enlist in the services as a profession? Like they do today, or did they only join up when there was a war on? I suppose if he joined up between wars that would solve the age problem....what was the year that this uniform became standard issue? Was it before WWII? It looks like this is a picture he had taken shortly after "graduating basic training" (sorry if I'm not using the proper words, it's just that I know my great grandparents were not well off, and I doubt they would have spent money to get a picture taken just because.)

Sorry for my ignorance, all I'm really trying to do is date the picture, and I don't have anything else to go on.

Edited to add: I just saw your reply and that's the biggest obstacle, I have nothing more than what I've posted here to go on (besides his last name). No birthdate or middle name, just first and last name and genrally area in a province. Oh well thank you for trying.

Odds are it’s your Grandfather. The timeline would be about right. The uniform is battledress Second World War vintage. IIRC the habit of doing up the collar went put of style around 1944. So its not post war I would think. Also I think that style of overseas cap wasn't used much after the war either.

Theoretically this would suggest earlier than that date which would go with the year of birth of around 1925. He looks fairly young and would have been say 20 at wars end.

As noted it’s almost impossible to tell unit or branch of service as we can’t make out any shoulder titles, and the cap badge is hard to make out. We can surmise he’s not from one of the Highland units. The badge is not Artillery, or Engineers so we can discount those too and Armoured units as well I think

I’m presuming he’s from Atlantic Canada (your profile info implies that you’re from there) which narrows it down even more.

Feel free to PM any other details you’re not comfortable posting here, such as Province, hometown etc and I’ll see if I can narrow it down some more.

Two possibilities for the cap badge are 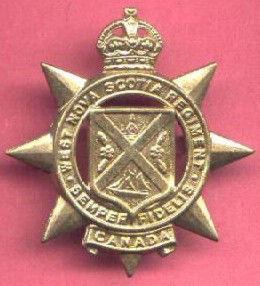 It could also be the Royal Canadian Army Service Corps badge (none of the other assorted WW2 vintage badges looks similar). 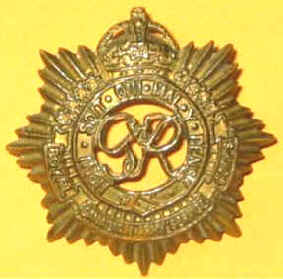 Anyone else see similarities?
L

I think WNR might be a good guess, he was from the Wolfville area which is only about a half hour from Windsor.
L

Okay I took a closer look at the original photo, it's much clearer than the one I uploaded which is a picture of a picture. I can distinctly see that the badge has three and only three points on its upper half, much like a maple leaf. I took a look at a site posted in another thread and although I'd never be able to make a definitive match because it's impossible to see the deatil or the entire badge, the top portion most closely resembles those of:

I found a middle initial, birthdate, and specific birthplace for my great grandfather, and family is adamant that this photo is him. Can you tell me if it's possible he's wearing a jacket which is covering up his uniform? I see no buttons whatsoever, and the pockets are HUGE....lol. I don't even know if they had zippers back then.

Where would I start with this information? You said there was a thread for Subject Matter Experts? Do they charge a fee?

Was he / Would he have been in the Veterans Guard of Canada during WW2?

Was he / Would he have been in the Veterans Guard of Canada during WW2?
Click to expand...

Here's a pic of their cap badge:

That doesn't look like the badge but thank you.

If you wait a second with your cursor over the pic, you can enlarge it even more by clicking in the bottom right corner, and get some much better detail on the badge.

There's one person I know who may be able to take that high-res photo, look at it, and come up with something on it.  Now, that is definately a WWII photo.  The wedge cap wasn't worn in WWI (as far as I know), and the beret was pretty well "it" by Korea, some five short years later.  His name?  He's on here as M O'Leary.  He may be able to help.
L

That badge looks somewhat like the ones used by the Cape Breton Highlanders.

But then, in this 1942 pic they were wearing a glengarry...http://www.centralcapebreton.com/photoalbum/cape_breton_highlanders_england.html

The breast pockets have their buttons concealed - which marks the jacket as being made after 1941?

There are no Volunteer medal or campaign star ribbons so +/- 1942 would be my guess....

Ok Sorry preoccupied last night, so couldn’t come back to this.

One are we sure re the DOB there and that it is your Great Grandfather? He would have been in his late 30s early 40s in that picture and llos too young. Mind I guess it is possible, some people don’t look their age.

All evidence points to this pic being taken late 1930s early 1940’s. Headress out of use after 1945 and by thenm we're really pushing the age thing.

Geo is right re lack of medal ribbons and hidden buttons that also helps date it to pre 1943.

The Cap badge is definitely not one of the Permanent Force ones so I would say post 1939. It was possible he was in the Militia but from most of what I’ve read they were short of BD uniforms prior to mobilization and wore WW1 hand me downs. That would have been reserved for officers and NCOs I would presume and no evidence of him being either,as we would see part of the rank showing in the picture.

Not Cape Breton Highlanders as noted they wore a Balmoral.

Not Oxford Rifles their Cap Badge was Black and this one is made of brass and/or white metal.

So that leaves us Kent Regiment, Perth Regiment, QOR’s in addition to my earlier possibilities and despite the geographic connection the better picture seems to discount the WNSR.

If we knew where he served and/or if he went overseas it could help too.

C&Y were in the 1st Division and served in Sicily and Italy.

QORS were in the 3rd Division and initially raised in and around Toronto.

Perth Regiment was part of the 5th Armoured Div in Italy. However to discount them they didn’t arrive there until 1944, and I would presume that all the older 40+ who joined up in 1939 would have been replaced by younger men by then.

Kent Regiment never went overseas IIRC, but he could have transferred later.

RCASC could have been anywhere.

Well we’re not really much further along, as soon as we discount one possibility another pops up.

The problems with assumptions BTW is evident. We presumed because he's from Nova Scotia he would have joined up there and/or been in a Nova Scotia regiment which is not always true. My Uncle and his brother both from the northern part of the province joined up in
1939. My uncle served overseas with the WNSR, his brother ended up in the Royal Winnipeg Rifles and was KIA with them in 1944. My maternal Grandfather joined up in 1914 also from Nova Scotia and some how ended up serving in a mounted rifle unit raised in Western Canada. Therefore we can't automatically discount any possibility.

BTW lanai you were asking who the site SMEs were, I think they’ve shown up. Renumeration for this is solving the mystery.

would it simplify things for our new member if she were to simply contact (or if other members in those units were to do so for her) the units that the SMEs have indicated are most likely? She could provide the units with Gran'pappy's (or Great Grand-dad's, whichever) name, and they could do a search for her?

Did that make sense? It did in my head, but we all know what goes on in there.

I believe the battle dress in question was introduced in October 1939.

If your positive on the date of birth and name, It's probably time to start poking around
the National Archives for a service record.

the original poster is also advised to try this forum if her/his ?s haven't been fully answered:

the webmaster has published a couple of books on period uniforms and may be able to assist further; several other authors also post there regularly. battle dress actually changed quite visibly after WW.II - the responses thus far have Id'ed it correctly as wartime vintage. first issues were made in Oct39 ad indicated, not the "1930s". The wedge cap was also introed in 1939, and was not a pre war item. geo's comments on exposed buttons are a red herring i think, as canada did not produce 'economy pattern uniforms.
L

Wow, lots of good people out there willing to help out. I'm very impressed and want to say thank you, I will try some of these suggestions.
You must log in or register to reply here.