From Swastika to Thunderbird

From Swastika to Thunderbird 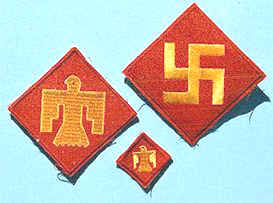 Here is a short history lesson of the 45th Infantry Division where my M38A1 has it‘s roots...

For the first fifteen years of its existence as a Division, members of the 45th Infantry division proudly wore on their left shoulders an ancient "good luck" symbol, the swastika, in yellow on a square red background. But when the swastika was adopted by Adolph Hitler and his Nazi party in Germany during the late 1930‘s, it became an odious symbol and was abandoned as the insignia of the 45th Infantry Division.

While members of the 45th took off their swastikas and wore no insignia for many months, the Adjutants General and Commanders of units of the 45th Infantry Division in Oklahoma, New Mexico, Colorado and Arizona called on guardsmen and citizens of all four States to suggest designs for a new insignia. Hundreds of designs were submitted, and a Board of Officers was appointed to consider all the designs and recommend one for adoption.

Before it‘s first meeting the Board obtained information from War Department files on the symbolism of the original insignia. It was learned that the four sides of the square red background represented the four States in which units of the 45th Division were located, the red and yellow colors were indicative of the Spanish heritage of the area, and the swastika had been selected as a typical American Indian symbol.

At the first meeting of the Board, held in Oklahoma City, members went through all of the designs and discarded those which were considered too fanciful, those which were not representative of all four States and others which were lacking in symbolism. In a discussion following this action, members of the Board agreed that the new insignia should retain the original red an square background and the red and yellow colors of the original insignia, with a new design replacing the swastika. All suggested designs which did not meet these criteria were then eliminated from consideration.

A second meeting of the Board concentrated on the remaining suggested designs and selected three which were considered to be the best. First choice was Thunderbird, submitted by Joe Tice of Oklahoma City, former enlisted man in the 45th; by Sgt. Raymond S. McLain Jr. of Oklahoma City, and also by Brigadier General Harold H. Richardson, the Adjutant General of Colorado. Second choice was a Colt revolver, caliber .45, of the type worn and used by frontiersman in ‘winning the west‘. Third choice was the figures "45" in various configurations.

These designs were submitted to the four Adjutants General in Arizona, new Mexico, Oklahoma, and Colorado. Major General Alexander M. Tuthill, himself a former commander of the 45th Infantry Division, returned the file to General Barrett with the comment: "Of the three designs submitted, I dislike the Thunderbird the least"!

After approval of the Commanding General, Eighth Corps Area, and the Chief, National Guard Bureau, the Thunderbird design was officially approved by the War Department and authorized for manufacture and wear. The document approving this design, stated that the Thunderbird was an American Indian symbol signifying "sacred bearer of happiness unlimited".

The following is reprinted from http://www.grunts.net/army/45thid.html

In 1950, the 45h was called to action for the Korean War. They were on of two National Guard Divisions to see action in the war. (the other being the 40th Infantry Division of the California National Guard) Throughout 1950 and into 1951, the 45th brought in new troops to fill its ranks and was transferred to Japan to finish its training. Almost 70% of the Division had combat experience from World War Two, mostly in leadership positions.

In December of 1951, the Thunderbirds arrived on the Korean peninsula and took up defensive positions in the Tonchon-Chrowon areas. Their primary mission was to hold their sectors and drive off any enemy advance. All through 1952 the 45th engaged in numerous small battles at Old Baldy, Pork Chop Hill, Heartbreak Ridge, and other places along their sectors. In every instance the Thuderbirds held their ground and the North Koreans never broke through. By the end of 1952, the Guardsmen of the 45th began rotating back home after their two year terms ended and were replaced by active duty soldiers. The division remained in Korea until the peace accord was signed and was then deactivated back to National Guard status. In 1969, the Division was disbanded and reorganized as the 45th Separate Infantry Brigade of the Oklahoma National Guard. The Brigade conducted numerous training exercises.

Only one unit of the 45th saw action during the Persian Gulf War, the 1st BY of the 158th Field Artillery. The battery was the first National Guard unit to fire on the Iraqi defenses and was called upon to support the 3rd Armored Division the 1st Infantry Division and the 2nd Infantry Division. In all the 1-158th fired 903 rockets onto Iraqi defenses and was instrumental in breaking up their positions for the armored and infantry forces.

Today the 45th Brigade is part of the 7th Infantry Division as an enhanced Brigade along with 2 other National Guard Brigades, the 39th and the 42nd.

Also if you go to S.E.Asia and South Asia you will see the sign and it is also a religous symble.
M

yeah when i was a kid i visited a buddhist temple with my school, and i saw swastikas everywhere and didnt know what the **** was goin on cos at the time i had no clue it was a religious symbol
S

Same here, till I watched a Show on Weirds homes and there was this swastikas house, and a man with 100‘s of swastikas tattooed to him. Then he explained what they really mean. I was like ahhhhhhh. I only knew them as evil nazi, but I still wouldn‘t post them around these days.
You must log in or register to reply here.

Is The Infantry Brigade Becoming Obsolete ?