I wonder just how effective any outside help will be at this point in the continuing, worsening drug war there?

France offers Mexico police aid
French President Nicolas Sarkozy has pledged to help Mexico in its battle against organised crime during an official visit to the country.

Mexico is currently engaged in a battle with feuding drugs cartels.

The gangs are fighting a vicious turf war in the north of the country over lucrative smuggling routes into the US.

Mexico deployed thousands of troops this week to Ciudad Juarez, near the US border, to try to wrest control of the city from the gangs.

"I have told President Calderon that we are at his disposal," he said.

"We are ready to receive Mexican equipment in French police laboratories. We are willing to send equipment to Mexico.

"We would like to help Mexico resolve this problem which causes so much distress such as insecurity."


The French president was accompanied by his wife Carla Bruni as well as French business leaders on his one-day visit.

Among business deals unveiled during the visit was an investment by helicopter maker Eurocopter to build a $550m (£397m) assembly plant in Mexico.

Mr Calderon said that the investment would not only be a boost for Mexico's aeronautics industry "but it will also improve equipment conditions for our armed forces".

Mr Sarzoky said he aimed "to bring France and Mexico's economic, cultural, political and diplomatic relations to a level never reached before."

The two leaders also discussed the case of French citizen Florence Cassez who is serving a 60-year prison sentence in Mexico for her role in a kidnapping gang.

Mr Sarkozy said a team of legal experts from both countries would examine whether she could be repatriated to France.

The French president also addressed the Mexican Senate during his visit.

Analysts say the trip comes as Mexico is seeking to diversify its export destinations, with 80% of its exports currently going to the US.
Click to expand...

Mexican police have found at least seven bodies on the outskirts of Ciudad Juarez,
near the US border. The bodies were partially buried in a desert area south of the
city. Police are working to identify the victims.

Ciudad Juarez is Mexico's most violent city. Fighting between drug gangs has led
the government to send thousands of troops to patrol its streets. About 1,600
people were killed in the city last year as criminals fight to control drug routes
into the US.

More than 1,000 people across Mexico have been killed already in 2009, about
one-third of them in Ciudad Juarez. 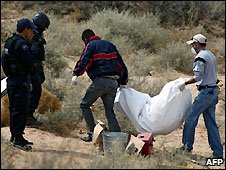 The bodies were found in the desert
outside Ciudad Juarez

Beheadings, attacks on police, and shootings in clubs and restaurants are a daily
occurrence in some regions. Five severed heads were found in ice coolers by the
side of a road in the central state of Jalisco on Tuesday, with notes addressed to
rivals of the killers, who were assumed to be involved in the drug war.

Some police forces across the country have been corrupted by the rich drug cartels
and journalists who report on cartel activities have been targeted.

Since December 2006 the Mexican government has deployed a total of about
40,000 troops and police to fight the country's drug cartels.

The Mexican government holds that the violence wracking the country is a reflection
of its success in tackling the drug gangs, which have been rendered leaderless and
reduced to fighting for fewer spoils. Others argue that the cartels have become so
powerful that they effectively control some parts of the country, and the violence
is evidence of their gang law.
You must log in or register to reply here.