A man in his 30s was shot dead by police south of Montreal on Monday morning after two Canadian soldiers were hit by a car. Police say the man fled the scene of the accident when police arrived, was involved in a chase, lost control of his car and flipped it, got out of the car and ran at police with a knife.

It began just before noon, when the soldiers were hit in the parking lot of a strip mall in St-Jean-sur-Richelieu and the suspect sped off. The regional police followed him and he lost control at an intersection.

When police caught up, the suspect climbed out of his car, a knife in his hand, and ran at them. Police opened fire and he died.
Because the local St-Jean-sur-Richelieu police were involved in a fatality, another police force, in this case the Sûrété du Québec, has taken over the investigation.
Click to expand...

Reproduced under the Fair Dealings provisions of the Copyright Act.

A man in his 30s was shot by police in Saint-Jean-sur-Richelieu, Que., earlier this afternoon after he hit two members of the Canadian Forces with his car and led police on a dramatic high-speed chase.

The soldiers were hit in a parking lot of a commercial plaza at around 11:30 a.m. ET. Both were injured, one critically.

The incident was raised in the House of Commons this afternoon by Conservative MP Randy Hoback, who questioned Prime Minister Stephen Harper about "unconfirmed reports of a possible terror attack" targeting members of the Canadian Forces.

Harper would only say he is "aware of these reports" and that they are troubling.

Police have not named the soldiers but confirmed at an afternoon press conference that they were members of the armed forces.

Lieut. Guy Lapointe of the Sûreté du Québec said it's too soon to say if the victims were targeted.

"All I can say is that the theory that this is a deliberate act is part of what we’ll be looking at," he said. "But it’s really too early to speculate at this point."

Lapointe said officers from the Saint-Jean-sur-Richelieu police spotted the suspect not long after the soldiers were hit and followed the driver for four kilometres.

The chase ended when the suspect lost control of his car, flipping it into a ditch.

Police say the man got out of the vehicle and several shots were fired by officers.

Conflicting reports on whether the suspect is indeed dead or not...

Stay safe out there folks.

A wish for quick and full recoveries to the injured troops.

A full and speedy recovery to both injured members.

As for the death of the (possibly) little Johnny Jihad, no tears here.  Good riddance.

This is reported, by Vassy Kapelos, Global National parliamentary correspondent, to be the PMO statement: 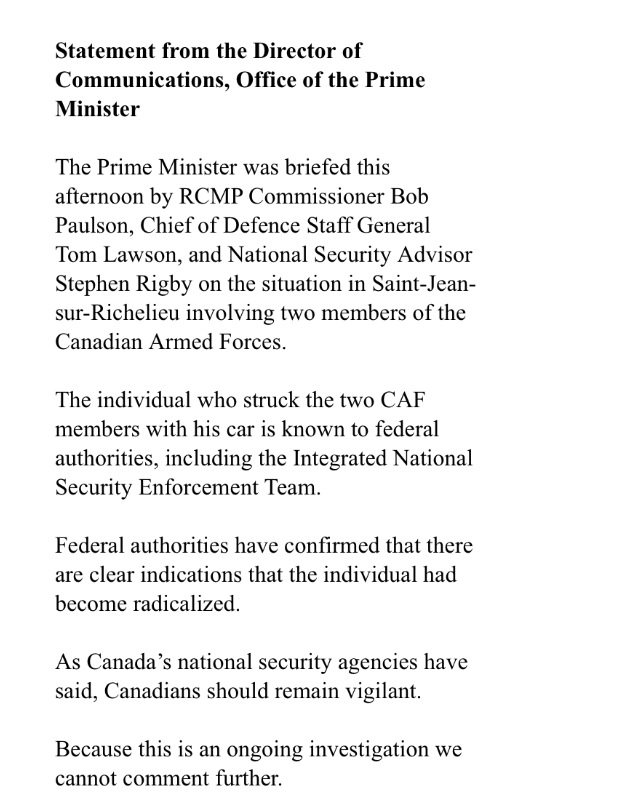 Hoping for a speedy and full recovery by the troops involved

Meanwhile, this from the RCMP:

This individual was known to Federal authorities including our Integrated National Security Investigations team in Montreal who along with other authorities were concerned that he had become radicalized.

Out of respect and deference to the ongoing Criminal investigation arising from today's terrible events the RCMP will not comment further except to say that we are working with our law enforcement partners to ensure all avenues of investigation are pursued.
Click to expand...

Perps name was Martin "Ahmad" Rouleau and he was a convert who had been radicalized, here is an article from La Presse which details more....

I had had a bad feeling that something like what happened to Lee Rigby would happen soon, what with the ISIS threat and all.

Prayers for their recovery and the comfort of their families.

My prayers and thoughts for a quick and full recovery of our two brothers.

Thoughts and prayers with the family, very difficult to read :S

Thoughts and prayers to the wounded and their families.  Kudos and much thanks goes to the SQ for ending this idiot's spree - Good riddance.

Weren't we told in the past not to wear uniforms out of work?

Sheep Dog AT said:
Weren't we told in the past not to wear uniforms out of work?
Click to expand...

One was not in uniform.


Clean shaven and clean, trimmed hair makes one not look like a barbarian.

Weren't we told in the past not to wear uniforms out of work?
Click to expand...

You'd think it wouldn't make a difference, at least for reservists travelling from armouries. Even in civvies (as is required for us newbie cornflakes with "pizza chef" berets), the CADPAT small pack/duffel bag and haircut make it blatantly obvious.

Quick recovery to the 2 members, and good shoot SQ.

Sheep Dog AT said:
Weren't we told in the past not to wear uniforms out of work?
Click to expand...

And let's hope we don't go down that road for a handful of reasons...

Perhaps, but if it keeps our families safe I'm not sure I'd be against it.
You must log in or register to reply here.

Man killed by police identified as RCMP officer after alleged attack on woman, teen in Monteregie