Anywhere in Canada there has to be one !!

I saw a cool austrailian Army recruiting video a few years ago with troops charging out of the back of one, I thought" that's a funny looking buffallo", that's how I learned about it.
A

I know this Caribou isn`t in Canada, but this just turn to be a coincidence that i had just was browsing through aircraft classifieds and i come across this just before i read this forum.

From Wikipedia... de Havilland CV-2B, AF Serial No. 62-4149
Exhibited at Cavanaugh Flight Museum in Dallas, Texas. (fully restored to flying condition, only one in North America)[14 http://www.cavanaughflightmuseum.com/CV-2B.html not %100 but close?

Come on folks -there has to be a Caribou aircraft somewhere in Canada.

Saw this one at Pt Dickson in Malaysia 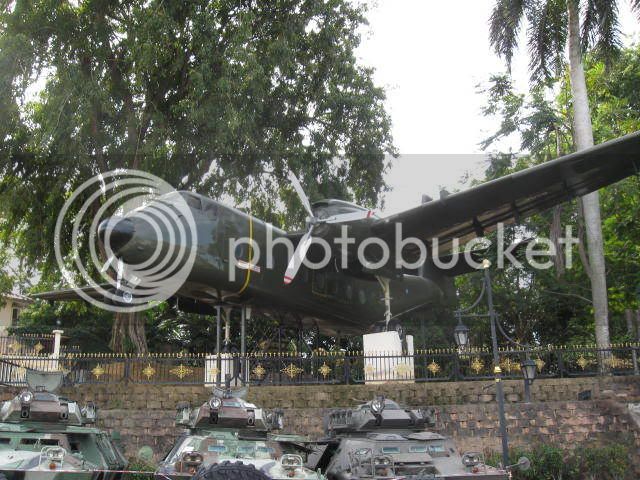 From what I have read on line, Canada did not save any of the aircraft for display  or  anything else.

The Royal Canadian Air Force acquired nine Caribou transport Aircraft in 1960. This Aircraft's primary role was transport flying, and it saw action overseas in many United Nations (UN) missions. One Aircraft was destroyed during a UN mission in India when it was strafed on the ground by a Pakistani Air Force fighter.
The aircraft were retired after 1971. No website found as to what  happened to them after retirement

Thank you Blackadder with reference to web page http://www.dhc4and5.org/CV2.html-alas has not been updated since 2005
and as for you Former HorseGuard   I suspect you are right about none kept in Canada

As for what happened to  I know three were returned to Canada from El Arish UNEF 1
and
as mentioned
one was destroyed in UNMGIP India  and of the nine I have accounted for five-  the rest..well .who knows ..but it would appear none of the 9 are in Canada


Five were given by Cdn military shortly thereafter to Tanzania ( where you can see it has been newly restored :>)


Again thanks for the help both of you

You know about the one in Hamilton??

I believe you are talking about the DHC Buffalo - to commemorate Canaian UN 116 ATU shot down in Syria which was restored and is now in "perfect restored - not yet flyable -  but an excellent restoration- I was on the Committee.
Alas
not a Caribou
- still looking -
in Canada

Quite the contrary
really appreciate your interest
Gord

gordjenkins said:
"perfect restored - not yet flyable -  but an excellent restoration-
Click to expand...

Is there an intent to get her flying?

When I was there in July, I got the impression that it would be impossible to make her fly-able again.

I could be incorrect.

No.
There is structural corrosion in the airframe.

Ah, ok, that's what it was.  I wasn't positive (we were kind of rushed on our visit.)

Bit of a Necro thread, but thought this video would be of interest. Now can we write it into the statement of requirements for the new SAR aircraft?  ;D

All of the remaining 'Boos' were taken off strength with the Canadian Forces in June 1971 and subsequently transferred to the Tanzanian Air Force.

Cheers...Chris
You must log in or register to reply here.

What if....A Super disaster? Impact on Canada or the world? Napkin speculation
2 3 4