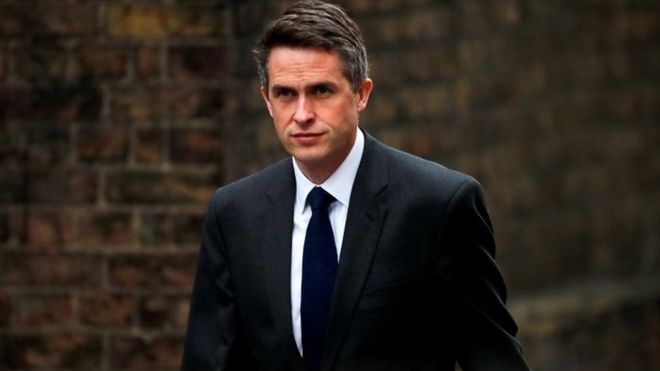 Gavin Williamson has been sacked as defence secretary following an inquiry into a leak from a top-level National Security Council meeting.

Downing Street said the PM had "lost confidence in his ability to serve" and Penny Mordaunt will take on the role.

The inquiry followed reports over a plan to allow Huawei limited access to help build the UK's new 5G network.

Mr Williamson, who has been defence secretary since 2017, "strenuously" denies leaking the information.

In a meeting with Mr Williamson on Wednesday evening, Theresa May told him she had information that provided "compelling evidence" that he was responsible for the unauthorised disclosure.

In a letter confirming his dismissal, she said: "No other, credible version of events to explain this leak has been identified."

Responding in a letter to the PM, Mr Williamson said he was "confident" that a "thorough and formal inquiry" would have "vindicated" his position.

"I appreciate you offering me the option to resign, but to resign would have been to accept that I, my civil servants, my military advisers or my staff were responsible: this was not the case," he said.

The inquiry into the National Security Council leak began after the Daily Telegraph reported on the Huawei decision and subsequent warnings within cabinet about possible risks to national security over a deal with Huawei.

BBC political editor Laura Kuenssberg said sources close to the former defence secretary had told her Mr Williamson did meet the Daily Telegraph's deputy political editor, Steven Swinford, but, she pointed out "that absolutely does not prove" he leaked the story to him.

Security correspondent Frank Gardner said the BBC had been told "more than one concerning issue" had been uncovered regarding Mr Williamson during the leak inquiry and not just the Huawei conversation.

Downing Street has made a very serious accusation and is sure enough to carry out this sacking.

For the prime minister's allies, it will show that she is, despite the political turmoil, still strong enough to move some of her ministers around - to hire and fire.

Mr Williamson is strenuously still denying that the leak was anything to do with him at all.

There is nothing fond, or anything conciliatory, in either the letter from the prime minister to him, or his reply back to her.

The National Security Council (NSC) is made up of senior cabinet ministers and its weekly meetings are chaired by the prime minister, with other ministers, officials and senior figures from the armed forces and intelligence agencies invited when needed.

It is a forum where secret intelligence can be shared by GCHQ, MI6 and MI5 with ministers, all of whom have signed the Official Secrets Act.

There has been no formal confirmation of Huawei's role in the 5G network and No 10 said a final decision would be made at the end of spring.

Huawei has denied there is any risk of spying or sabotage, or that it is controlled by the Chinese government.

Mrs May said the leak from the meeting on 23 April was "an extremely serious matter and a deeply disappointing one".

Foreign Secretary Jeremy Hunt said the prime minister had no alternative but to sack Mr Williamson, but he said on a personal level he was "very sorry about what happened".

Labour's deputy leader Tom Watson has called for a police inquiry to investigate whether or not Mr Williamson breached the Official Secrets Act.

But Scotland Yard said in a statement that it was a matter for the National Security Council and the Cabinet Office, and it was not carrying out an investigation.

Defence Committee chairman Julian Lewis told the BBC that Mr Williamson's sacking was a "loss" when looked at "purely" from the point of view of defence.

He said he thought "very highly" of Ms Mordaunt - the first woman to take the role of defence secretary.

Rory Stewart has been confirmed as the new international development secretary, taking over from Ms Mordaunt.
Click to expand...

Ok, who brought their Huawei mobile phone in to the meeting?

He's quite the walker: https://en.wikipedia.org/wiki/The_Places_in_Between

Penny Mordaunt is the replacement.  https://www.reuters.com/article/us-britain-politics-mordaunt-idUSKCN1S74GA

Some of you may remember her: https://youtu.be/Z91arJDZ7Fk

The Subbie on the left is the new Defence Secretary.

Ouch! That was quite the "splash"

And she did it twice...
You must log in or register to reply here.