My dad enlisted in the artillery in Victoria in 1941 and was first assigned to the coast batteries around town before being posted to the 3rd Div Arty. He was at Albert Head on the 9.2in guns and during one inspection, when the battery was supposed to be 'ready for action', the inspecting officer approached him and told him to hand over the lanyard to the gun, which he did. The officer, without warning, pulled the lanyard. Nothing happened. The battery commander was immediately sacked and the lesson 'we are at war and must be ready' was learned the hard way.

At subsequent inspections the inspecting officer did the same, without warning, and happily launched a 9.2 inch shell into the salt chuck.

Daft,
hijack okay. I met a few of more than likely of your dads co- gunners. One passed on with cancer recently but several are still in the Sooke area. Picked quite a bit of primary on the inter war period from them. Try using the BC archivies search engine, with the image/digital engaged or checked and various word search combinations. There is a lot of old information either finally catalogued and available or some very good new information that was recently acquired. For those of you history retrobates the photos include the 60th Foot, San Juan Island and the pig war......................

My father, Private Thomas R Docherty was an AA gunner stationed at Prince Rupert with the 33rd A.A. Battery of the R.C. Artillery.  Does anybody here recall him?  Was anybody here a member (or had friends/family) with the 33rd? Lastly, does anyone have any trivia or information relative to the post? I would love to hear... iper:

the book "Prince Rupert, the war years" by Susan Rose Harper has close up pictures of some of the 40mm bofors up there, who knows maybe one of the gunners might be your dad, check your library, the Vancouver system has it. Also check out "Barrett Point" in wikipedia, I set up a webpage there on Prince Rupert.

An interesting read, includes comments regarding the US defenses in the Strait of Juan De Fuca. Also talks about the Treatt report by a RA Officer who designed the intial plan for defending the West Coast. Also the fact that they added a 4th gun to Barrett Point is interesting.

Also created wiki pages for Yorke Island and Mcauly Point (Which I spelt wrong, trying to fix it):

I just did a quick look. In the Yorke Island entry, Major Treatt is called (or it is hinted that he is ) a Canadian, although he was a British officer loaned to Canada to do a survey of coastal defence. See Vol II of The Gunners of Canada, pp 41, 447.

Does anyone have a good colour photo of a BC coastal defence emplacement - with gun?

You could try looking up other sites about Fort Rodd or McCaulay Point and other coastal defence sites.

When I was younger growing up in Eastern Passage NS we would go into the Gun Batteries at Hartlen Point Golf Course. There is one main tunnel which we managed to get into. It would take you under 2 of the gun batteries, the 3 rd was flooded. We could  get into one of the magazines which was still full of the old ammo racks. We also used to check out the Forts On McNabs Island. If anyone has some real info on these sites could you post it. If you are in the area check them out. Bring a couple of Flashlights. it gets tricky with  a dead one.

I may be going up with a bunch of guys to spend a couple of days on Yorke Island helping them fix it up.

Shots of coastal artillery gun pointing out to sea on West Coast. Guns are loaded and prepared.

Troops run out of underground tunnel to man guns on East Coast. CU as gun is loaded. MS the gun is fired. Two officers look on through binoculars. More firing of coastal battery.

My maternal grandfather was involved in the construction of the WWII emplacements at York Redoubt as well as many of the buildings in Aldershot.

Just got back from visiting the remote coastal defence fort on Yorke Island  Thanks to the efforts of a avid local historian, A rather colourful ex-memeber of the RCA, Western Command (historical group), the Artillery association and the 15th Fd Regt RCA, the fort has now being protected made into a Conservancy which gives it certain protection. The volunteers have been busy over the last couple of years cleaning up the fort, removing dead trees, opening the drains, etc
Also the relatives of the only solider to die up there came up as well and during the ceremony we had a moment of silence to commemorate his sacrifice. Also the Commanding Officer of my regiment gave a gift and the honourary title of "Battery Commander" to the local who has been spearheading efforts to protect the fort for the last 10 years. Which clearly meant a lot to him as he got teary eyed!


The fort is in pretty good condition and features a fairly unique "Plastic Armour" made up of asphalt and cement. What's astounding is that all the stuff is pretty much built by hand and wheelbarrow. 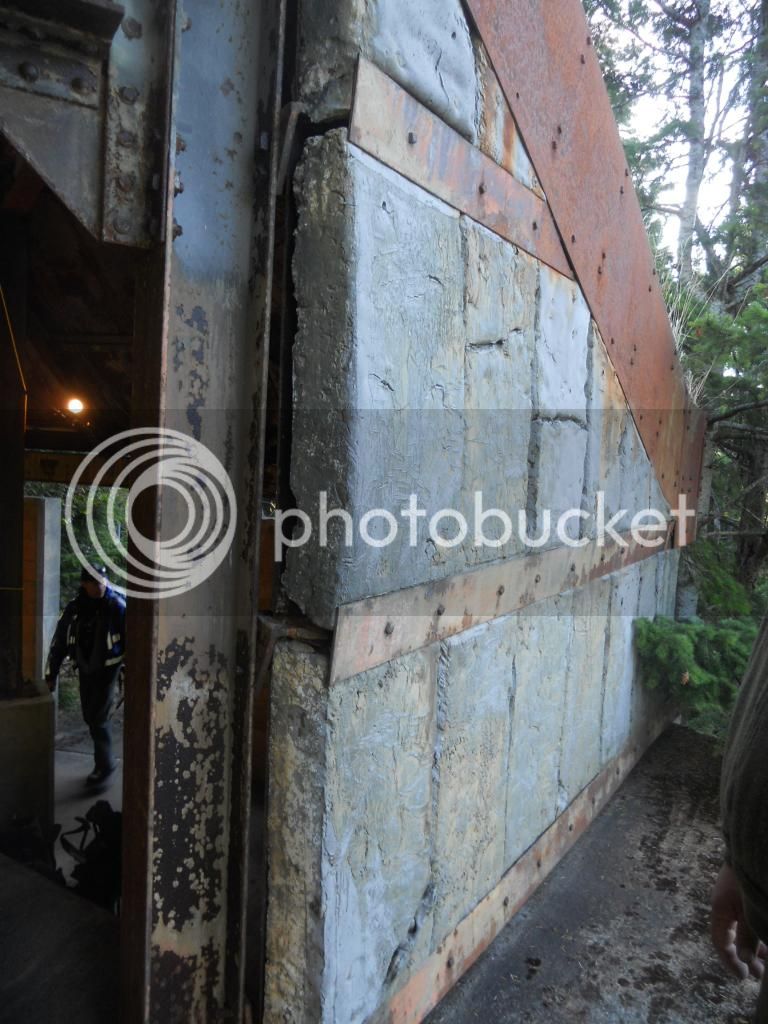 Here is the blurb from wiki

In 1938 Major Treatt of the Canada War Department, inspected the west coast of Canada and determined suitable locations for coastal defences. Yorke Island was determined to be a suitable site. The site was equipped with two 4.7” Quick firing guns, later replaced by two 6” Mk7 guns on Mk 2 mounting (transferred from the Stanley Park Battery). Also fitted was a 6 pdr Hotchkiss “examination gun”. Anti-aircraft defence was provided by two 40mm Bofors guns at two different sites. In all three 100 million carbon arc searchlights were positioned to maintain a night fighting ability. In addition examination vessels, nicknamed the "Gumboot Navy" due to the use of fishing vessels and their crew, were on station to assist the fort in examining all passing traffic.

Here is my album on it http://s690.photobucket.com/user/colinpark_photo/library/Yorke%20Island 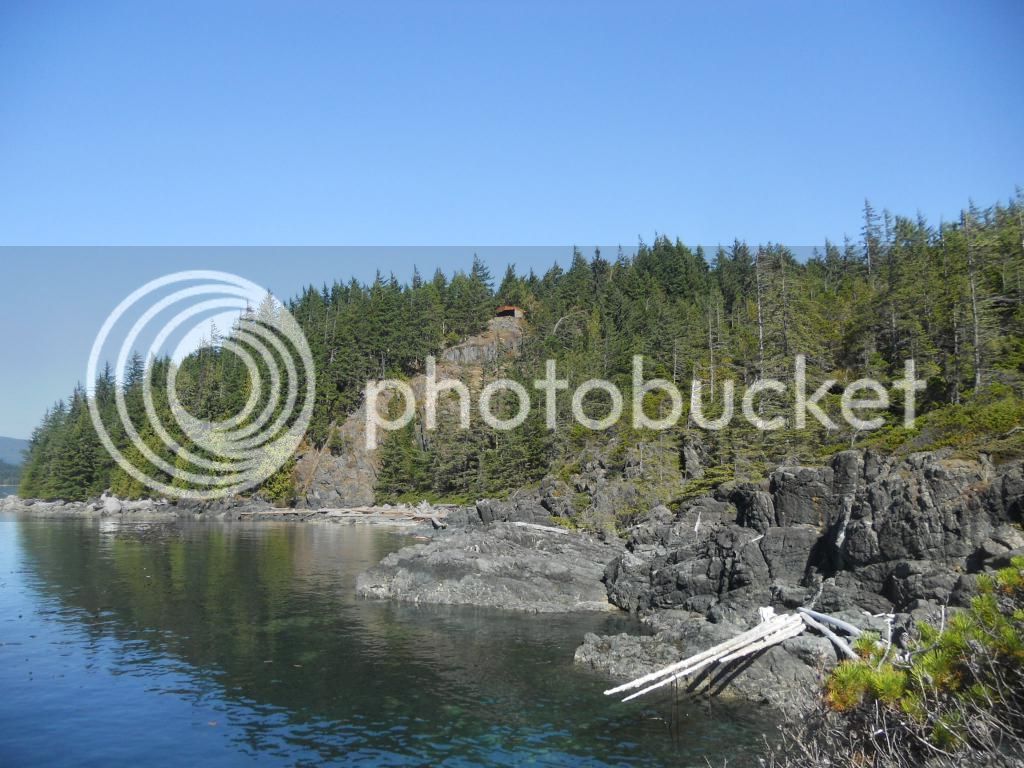 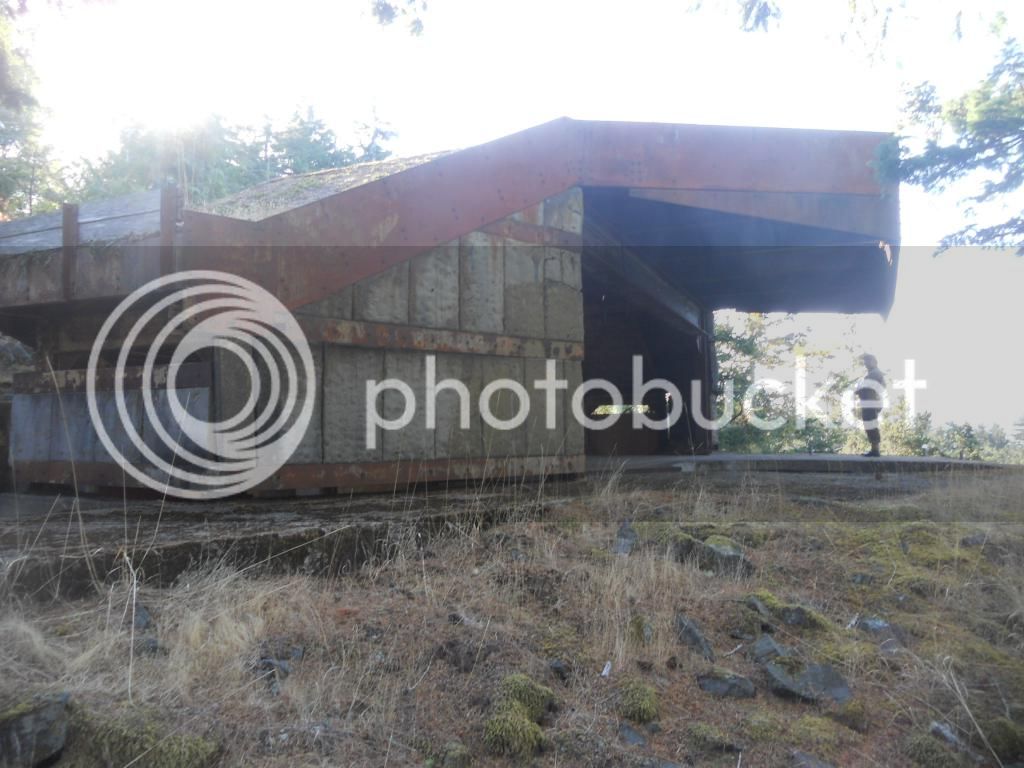 a picture of the early 4.7" mount at the same location

I was looking for something else in the City of Vancouver's Archives and came across a series of photographs from their collection that seem to be about coast artillery.  There is no description other than they are from 1943 and were taken by a photographer from a local Vancouver photo studio.  I suspect that they may be of the battery at Point Grey.

Blackadder1916 said:
I was looking for something else in the City of Vancouver's Archives and came across a series of photographs from their collection that seem to be about coast artillery.  There is no description other than they are from 1943 and were taken by a photographer from a local Vancouver photo studio.  I suspect that they may be of the battery at Point Grey.

I have to laugh at the archivist who definitely had no military grounding in any way, shape or form who recorded these fonds:  "Army training - big guns "

Colin P said:
Actually I think it might be Alberthead or one of the other Victoria forts
Click to expand...

Was thinking that too - some of the scenery looked pretty familiar, and not from Vancouver.

Colin P said:
Actually I think it might be Alberthead or one of the other Victoria forts
Click to expand...

You're probably right.  My original guess that it may be Point Grey was made on the assumption that the photos were accredited to a civilian, Vancouver based photographer and thus were likely of something local to his area.  On a closer examination of the photos, the gun is clearly marked as a 9.2 inch (see attached photo).  The guns at Point Grey were 6 inch.  A quick study of some of the history of West Coast defences indicates that the only 9.2 inch guns were at Albert Head.

the guns were shuffled around, so it gets confusing.
You must log in or register to reply here.

As US military sticks to airport, British and French forces are rescuing their citizens in Kabul: reports
2 3