This is reproduced, without comment, under the Fair Dealing provisions (§29) Of the Copyright Act from the Globe and Mail:

During the final months of the Second World War, as Allied armies waged a brutal campaign to liberate Europe, a rough-hewn band of Canadian soldiers revolutionized ground warfare with an unusual new technology.

They were called the 1st Canadian Armoured Carrier Regiment, assembled to drive Kangaroos, tanks modified to carry troops. The unit laid the groundwork for the tactics of today’s light armoured vehicles, protecting soldiers from gunfire while they travelled to enemy lines, but was swiftly dissolved at war’s end and its history was largely forgotten.

“There wasn’t really any push to recognize what the Kangaroos did,” said Colin McMechan, a trooper in the regiment. “It was just going to fade.”

In a ceremony this weekend, the regiment will get some overdue credit. After decades of obscurity, veterans alerted the Department of National Defence that they wanted formal recognition of the unit, and found a serving regiment to take up the Kangaroos’ battle honours, ensuring its story will be perpetuated.

The unit was born out of a problem after D-Day: Tanks often got ahead of infantry, leaving the soldiers to be mowed down in the open fields of northern Europe before they could reach enemy lines.

On the orders of Canadian Lieutenant-General Guy Simonds, a group of engineers hunkered down in an orchard near Bayeux, France, and removed the guns from U.S. M7 Priest motorized artillery pieces. The extra space in these “defrocked Priests” could carry 14 soldiers, a crew of two and a machine gun. The secret project was code-named Kangaroo, a reference to the safety of its namesake animal’s pouch.

In August, 1944, the new vehicles were rolled out at Le Havre, France, where the infantry units they carried captured every objective. The army soon converted more tanks, this time Rams, into Kangaroos and created a full regiment to man them. Members were drawn from across the Canadian Armoured Corps. Some were castoffs; many had never driven a tank.

“It was an opportunity for some units to get rid of their trouble makers,” said William Miller, the son of a Kangaroo veteran. “A lot of these men wanted to be doing stuff; they didn’t want to sit around and shine their boots.”

First, the Kangaroos helped push the Wehrmacht out of southern Holland in January’s Operation Blackcock. They then made their way north and east.

In some battles, enemy fire was so intense that infantry could not disembark. So they shot directly from the Kangaroos, turning them into moving bunkers. One time, Mr. McMechan said, they attached a howitzer and flame thrower to the back and towed them up a hill to capture a fortification.

The regiment also ferried supplies to the front and carried prisoners back. On one particularly miserable night, tanks became mired in the mud in Hochwald Forest and had to be pulled out with chains.

The unit wasn’t always successful. One infantry regiment was wiped out after the Kangaroos dropped them off. Another time, the Germans broke Dutch dykes, flooding roads behind the Canadians.

“Fear tends to leave you after a while, you say ‘If my number is up, it’s up,’ ” said Donald Simpson, a signals lieutenant, who had some close scrapes, including getting caught in the crossfire between the two sides during a mission to rescue wounded men.

The regiment was among the first Allies to cross the German border, the Rhine and the Siegfried line. By the time the Nazis surrendered in May, an estimated 770 men had served in it; 17 were killed and 21 injured.

The Kangaroos folded at Enschede in the Netherlands, the only Canadian regiment to disband without ever setting foot on home soil.

In recent years, the Kangaroos began pushing for recognition. Largely through the work of Mr. Miller and Chuck Konkel, a Toronto policeman and history buff, they reached an agreement with the 31 Combat Engineers, nicknamed the Elgins, to take on the regiment’s history.

“From a Canadian point of view, they received some unique battle honours. But they came and went pretty quickly,” said Ken Reynolds, a historian with the DND’s history branch.

At a ceremony in St. Thomas, Ont., on Saturday, the Elgins will accept a standard listing the Kangaroos’ honours to hang in their armoury. A Kangaroo bought by the Canadian War Museum – one of only a handful that still exist – will be paraded in the streets.

For their part, some veterans are greeting the immortalization with Canadian modesty.

“We followed orders,” Mr. McMechan said. “We just tried to do as good a job as we could.”

The 1st Canadian Armoured Carrier Regiment’s insignia was unique in the Canadian army, featuring an image of a kangaroo rather than a more traditional maple leaf or beaver, backed by the orange of the Dutch monarchy instead of British crimson.

The unit’s members and its commander, Lieutenant-Colonel Gordon Churchill, are said to have paid out of pocket to have their badges made.

While the regiment achieved a raft of battle honours in mere months during the Second World War, it had disbanded by the time they were granted.

Now, the 31 Combat Engineer Regiment, nicknamed “the Elgins,” has agreed to perpetuate the Kangaroos’ history. The union is appropriate, since many members of the CACR, including Col. Churchill, had previously served with the Elgins.

This relationship will be cemented by handing off a guidon – an armoured unit pennant listing battle honours – created by the Kangaroos to the Elgins at a ceremony on Saturday in St. Thomas, Ont.

A handful of the estimated 25 living Kangaroo veterans, plus their families, are expected to attend.
Click to expand...

Apologies if this was posted elsewhere.
D 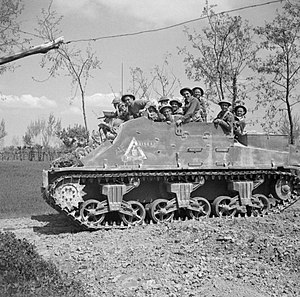 Necessity is the mother of invention.  Nice to see 1 CACR is being recognised in this way.  Hobart would have approved I'm sure.

On my way up to join the festivities this weekend :nod:

From what I've been told, they were the only Unit to be formed and disbanded outside of Canada.

For those that want to build one, here's Italeri's version:

ModlrMike said:
For those that want to build one, here's Italeri's version:

I have been looking for a 1:35 Ram version. But no luck. Unless I got deep pockets.

I've got a pedantic point ... engineering units don't get battle honours so how can they perpetuate battle honours of an antecedent regiment ? Do the Kangaroo honours not just get lost in ubiquity of it all


I do admit that a engineering unit does seem the most appropriate unit of those current existing to perpetuate
Are the Elgins going to stick a Kangaroo somewhere on the regimental regalia or is it just going to be hanging up the colours guidon in the armoury?

AJFitzpatrick said:
I've got a pedantic point ... engineering units don't get battle honours so how can they perpetuate battle honours of an antecedent regiment ? Do the Kangaroo honours not just get lost in ubiquity of it all


I do admit that a engineering unit does seem the most appropriate unit of those current existing to perpetuate
Are the Elgins going to stick a Kangaroo somewhere on the regimental regalia or is it just going to be hanging up the colours guidon in the armoury?
Click to expand...

I don't have the time right now, however I was at the ceremonies this weekend. You can be assured and take it from me, the Armoured Corps is absolutely onside with this and has given it the strongest blessing.

It's not about what trade the perpetuation goes to. It's the idea that it has come back to The Elgins, who had much to do with the original unit.

There was a replica Guidon presented, consecrated, retired and put up in the Officer's Mess which has all the Battle Honours on it. All with the blessing of DHH.

ModlrMike said:
For those that want to build one, here's Italeri's version:

They didn't use the Priest for very long. They found it very unsuitable. They moved to Ram tanks without their turrets.
O

recceguy said:
They didn't use the Priest for very long. They found it very unsuitable. They moved to Ram tanks without their turrets.
Click to expand...

The Priests were on loan from the Americans for the invasion, and were supposed to be returned. However there were a large number of Canadian Ram tanks in storage in the UK. Some were already being used to tow anti-tanks guns, so it was a logical step to convert a number of the remainder to APCs.

Don't get me going on why the best brains in the British and Canadian tank design and employment world were not turned loose on the challenge of getting infantry through the killing zone and onto the objective in 1942 or 1943. Instead a ton of effort was wasted on something called the Canal Defence Light which was a searchlight mounted on an AFV chassis which was supposed to blind defenders by beaming powerfull lights at them. Somewhere between 1500 and 2000 were made, but no more than a squadron or two saw operational service.
You must log in or register to reply here.

The Guns of the Regiment