B.C. dad and son honoured for rescuing two men in a capsized canoe

A B.C. dad and son have been honoured after they saved two men in a capsized canoe last summer while they were out fishing on a lake near Revelstoke.

On Labour Day long weekend, RCMP Cpl. James Moore, who was off-duty at the time, and his 11-year-old son Emmett went fishing on Griffin Lake, which is located about 27 kilometres west of Revelstoke adjacent to the Trans-Canada Highway.

RCMP say because the lake is glacier fed, it is clear and “intensely cold.” By mid-afternoon, the only other boat on the lake was a canoe with two men. When their boat capsized and they heard the men calling for help, Moore and his son sprang into action.

Emmett had been trained by his parents in self rescue and knew what they had to do, according to an RCMP news release. But they needed to paddle hard to reach the men across the lake.

Mounties say one man was in the water and clinging to the capsized canoe and the other had partially lifted himself onto the stern. Neither man had a life-jacket on.

Apparently Moore asked them if they could swim and neither could.


When the canoe flipped, all the contents scattered across the lake, according to RCMP, so the dad and son paddled to retrieve the life-jackets.

Somehow, Emmett managed to get the life-jackets on both men, who were exhausted and cold.

“I was concerned that the men would get hypothermia,” said Moore, a 12-year member of the RCMP Integrated Forensic Identification Services for the Southeast District, in a statement released by the RCMP.

Moore said he could see the men were turning a pale grey.

Moore decided to tow the canoe to the closest point on the shore. He found 40 feet of rope and Emmett told the men to grab onto the rope, according to RCMP.

There was no place to clip the rope onto on James’s smaller canoe, so RCMP say Emmett wrapped the rope around his wrists and braced himself against the side of his canoe locking his legs straight against frame.

RCMP say it took them 20 minutes to drag the men and the partially submerged canoe to shore, where Emmett jumped out and pulled the men by hand the rest of the way to land. Both men crawled out of the water and collapsed on the jagged rock.

Moore said he couldn’t have done it without his son’s help.

“It would have been a lot to manage without me getting into the water myself. Had we not been there, I fear these gentlemen would have become a recovery.”

On May 28, the Lifesaving Society awarded Moore and his son the Silver Medal of Merit that acknowledges meritorious service in saving a life during a water rescue.

The Lifesaving Society is a not-for-profit organization committed to the prevention of drowning and aquatic-related injury through water safety education. 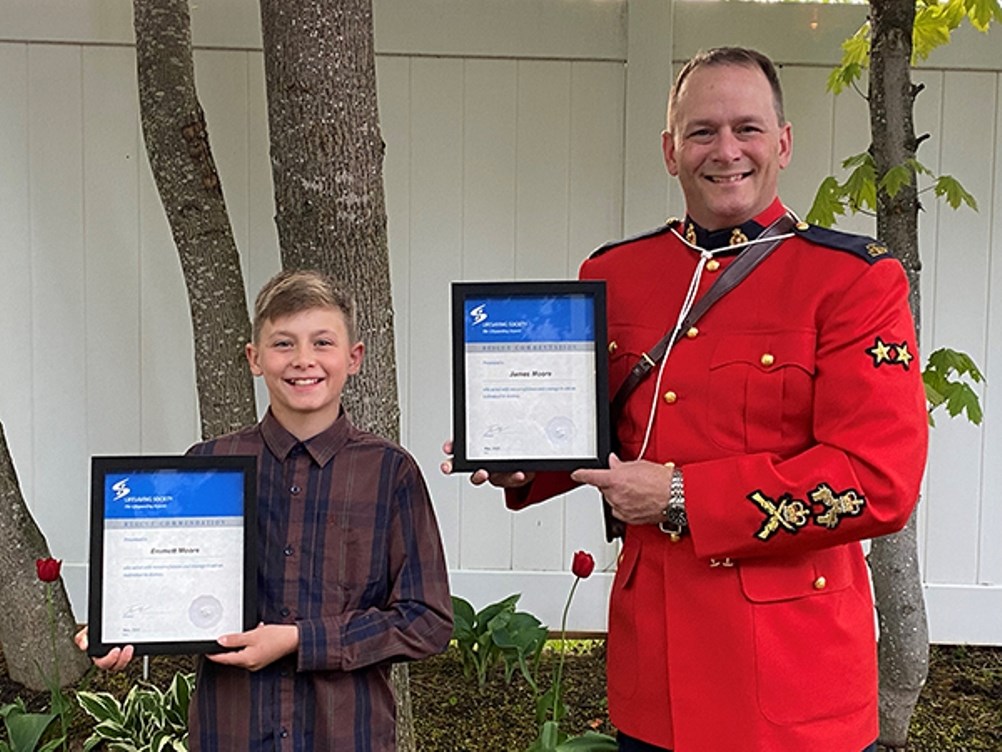 B.C. dad and son honoured for rescuing two men in a capsized canoe

www.timescolonist.com
You must log in or register to reply here.

Sgt. Ken Power, veteran and heroic rescuer, has brook named in his honour

How Ottawa abandoned our only Arctic port