A Deeply Fractured US

You meet some "interesting" people on the job. If the public only knew ...
C


"Kind of" related to the thread.  More for levity than anything else, just hope it makes some of you smile & chuckle  :nod:

Virginia prosecutors said on Monday a man facing charges for driving his pickup truck into racial equality protesters is a local leader of the Ku Klux Klan.

The statement says Rogers on Sunday night drove through a crowd blocking a street near Richmond, Virginia, and protesting the death of George Floyd, a black man who died in Minneapolis police custody. One person was hit by Rogers’ vehicle, but not seriously injured.

Henrico Commonwealth’s Attorney Shannon Taylor said in a statement on Monday that Rogers “by his own admission and by a cursory glance at social media, is an admitted leader of the Ku Klux Klan and a propagandist for Confederate ideology.”

That’s a lot of dead people...

LA homicides up by 250 percent over last week, LAPD reports

LA homicides up by 250 percent over last week, LAPD reports

So it went from 1(?) homicide in the last week of May to 6 in the first week of June.  It was 4 in the second last week of May.  Or those are the numbers I got using this app (directed there from the LAPD COMSTAT page).

Announcing a "250 Percent increase" makes it sound much more severe.  Makes one wonder if the department is playing the fear card.

https://homicide.latimes.com/
The Homicide Report  A STORY FOR EVERY VICTIM

A warning for First Responders:

A major divide is developing within the community of CrossFit enthusiasts in the wake of comments made Saturday night by company CEO Greg Glassman. 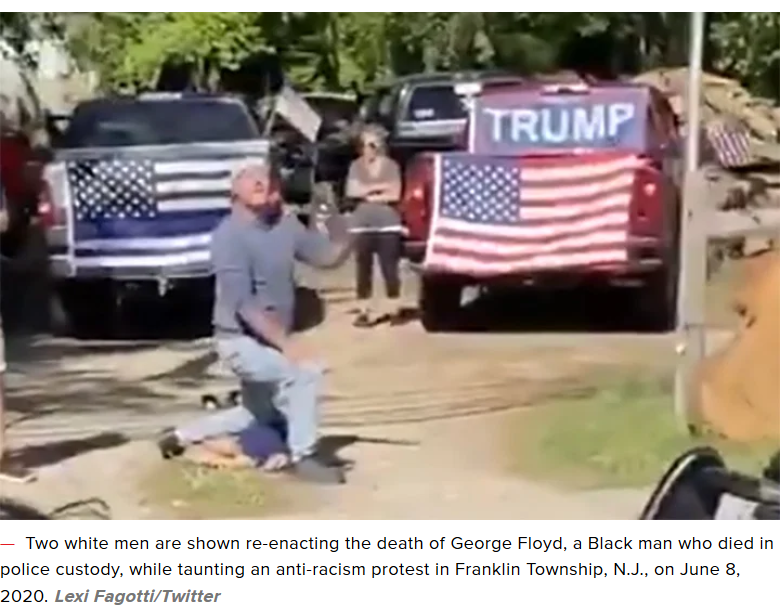 The incident happened during an anti-racism protest involving about 70 people in Franklin Township, N.J., according to reports. Several white men reportedly showed up in pickup trucks decked out in American and pro-Trump flags and started yelling slogans such as “all lives matter” and “white lives matter” at the demonstrators as they drove and marched by.


General Milley admitting his appearance at that strange photo op was a mistake.

Brad Sallows said:
We're in one of those "moments" during which activists feel they have enough momentum to settle scores: censor, ban, dis-employ, outcast, etc.  It'll pass.
Click to expand...

I see too many parallels to parts of the French Revolution. You folk see the news of what is going on in Seattle?

Yes. Let it roll; as a strictly utilitarian calculation we need the horrible examples more than we need to protect the people involved* in order to prevent even more widespread immiseration.

*Except the local residents and merchants; we should be prepared to extricate them and make good on their losses.

Local government on the "Escape from New York/LA" model.

Xylric said:
I see too many parallels to parts of the French Revolution. You folk see the news of what is going on in Seattle?
Click to expand...

I've heard of it but the details I do not know.

My reaction would be to cut all power, water and services to said buildings, cordon them off and tell the miscreants since they are a sovereign nation with no diplomatic ties with the USA they best figure it out. I figure about day three they'd decide differently.

Xylric said:
You folk see the news of what is going on in Seattle?
Click to expand...

Hamish Seggie said:
My reaction would be to cut all power, water and services to said buildings, cordon them off and tell the miscreants since they are a sovereign nation with no diplomatic ties with the USA they best figure it out.
Click to expand...

For those of us old enough to remember how it went down in Philly,
https://en.wikipedia.org/wiki/MOVE#1985_bombing

The good General probably remembers the Vietnam War protests where NG troops and some Regulars called out to defend the Pentagon. I remember troops being used in Detroit and LA. The oath of office for the military is to "defend the constitution against all enemies both foreign and domestic" and Antifa is an enemy. I shake my head at the weakened pols in Seattle and Washington state. The Guard must be called up to retake Seattle or else we could spiral into civil war.

No-one needs to "retake Seattle".  It's 6 blocks.  When the shit piles up and the food runs out and the rapes and assaults begin, the activists will lose their enthusiasm.

The problem with any organization that advocates for social change and sees limited success is that it's leadership changes to the ever more radical elements who set ever more extreme goals.

There comes a point where the original moderate activists abandon the movement and society in general either draws a line in the sand and says "this far and no more" or becomes reactive and pushes back. How society does that is the question.

I inadvertently walked into an Anarchists' march in Strasbourg once. There was a very limited police presence at the march although hundreds of riot police in small vans were strategically deployed around the edges. After the march a small army of workers had all the spray painted graffiti washed or sandblasted away and broken glass repaired. By the next morning it was as if nothing had ever occurred. No baton was ever raised; no tear gas ever fired.

Brad Sallows said:
It's 6 blocks.  When the shit piles up and the food runs out and the rapes and assaults begin, the activists will lose their enthusiasm.
Click to expand...

Sounds like what happened at Yorkville, then Rochdale. then the Yonge St. strip.
C

Brad Sallows said:
No-one needs to "retake Seattle".  It's 6 blocks.  When the crap piles up and the food runs out and the rapes and assaults begin, the activists will lose their enthusiasm.
Click to expand...

Eventually, it'll just run it's course & run out of steam.  And like Brad said, it's really 6 blocks where most of the folks have gathered & where the 'action' is.


Eventually, some folks will just stay home.  "I've been protesting for 3 days straight, I need a break."  Some folks will have to work.  It'll pour rain.  The garbage, lack of nearby open restaurants, the odd idiot doing something crazy, etc etc - people will eventually just start staying home.

The point the general public was trying to make has VERY CLEARLY been heard by the powers at me, with many politicians, police officers, etc in agreement.


It'll run it's course, and immediate tensions will ease.  The real 'unknown' is whether police services & state governments start to mandate some much needed reforms, and do so quickly enough that it will matter.

Otherwise, if things continue the way they are, the protests could come back significantly worse than this.  :2c:

Brent Stevenson, assistant chief of the Denver Health Paramedic Division, said facing a protest and a pandemic at once is uncharted territory.
“I don’t think there was a rule book for me really to figure out what we’re gonna do.”

FDNY is being taken to federal court after punishing four FDNY EMTs and paramedics for speaking out against health risks while fighting on the front lines of the COVID-19 pandemic.


Multiple high-ranking police officials in a number of cities, including Washington, Atlanta, Boston and New York have had their personal information shared on social media, including their home addresses, email addresses and phone numbers.
https://cbs12.com/news/nation-world/ap-exclusive-police-officers-personal-info-leaked-online-06-11-2020
You must log in or register to reply here.

Digital government: how are we doing?