Today as we are observing Canada Day we must remember that 1 July has not always been a day of celebration. In 1916 people were not very joyous in celebrating Dominion Day (as 1 July was known as till 1982 when the Canada Act was passed), the reason being that 1 July 1916 was the opening attack by the British in the Battle of the Somme. An attack that resulted in the greatest loss of life by the British Army in a single day, 57, 470 casualties of whom 19,240 were killed.

While there were no Canadian units involved in the battle, the 1st Newfoundland Regiment was part of the British 29th Division (remember Newfoundland did not join Canada until 31 March 1949). The battalion commanded by LCol Lovell Hadow suffered tremendous casualties, roughly 90% of the battalion were either killed or wounded in Beaumont -Hamel.

When war broke out in 1914 nobody on either side expected that the battlefield would become a static defensive battle that stretched across Europe. They were not anticipating an attritional warfare scenario. The French Army had been attacked by the German Army in Verdun since 21 February 1916 (the battle would continue till 18 December 1916) and this attack by the Germans drastically changed the scope of what the Somme offensive was to be, from a decisive blow against Germany to that of relieving the pressure on the French Army.

In preparation for the 1 July attack, the British had a seven-day preliminary artillery bombardment where 2,200 guns fired 1.7 million shells. Unfortunately, while this in an impressive amount of fire it was not enough to cut the wire, destroy deep dugout, and eliminate enemy artillery positions (counter-battery technology was not advanced enough at that stage of the war).

On the morning of 1 July 1916, there was an additional barrage of 600,000 shells then nine corps of the French Sixth Army and the British Fourth and Third Armies attacked the German 2nd Army. For the Newfoundland Regiment they received orders at 0845 hrs to move forward. They were situated in a support trench (called St. John’s Road) which was 230 meters behind the British forward line. Due to the number of casualties in the communication trenches they were forced to advance across the surface. At 0915 they left their trenches and as they crested the skyline, they became visible to the German defenders. Within 15 to 20 minutes after stepping off from St. John’s Road the battalion had become annihilated with the majority not making it past a blasted apple tree known as “the Danger Tree”. At 0945 hrs LCol Hadow reported to HQ that the attack had failed and soldiers were attempting to withdraw back to safety. It took Pte James McGrath 17 hours to make it back after being wounded several times.

Of the 780 men (22 Officers, 758 Other Ranks) there were only 68 men available for roll call the next day. It was a devastating loss for the Regiment and for the colony of Newfoundland, the dead included 14 sets of brothers, including four Lts from the Ayre family of St. John.

This was only the first day of the battle, a battle that would last till 18 November 1916 and would cost the British Empire 419,654 casualties including 24,029 Canadian casualties. So today take a moment to think of these soldiers that paid the ultimate price in serving our great nation and understand why today is called Memorial Day in Newfoundland. 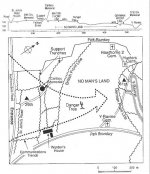 An Army of Never-Ending Strength: Reinforcing the Canadians in NW Europe 44-45